Big West remains a treat for the fans 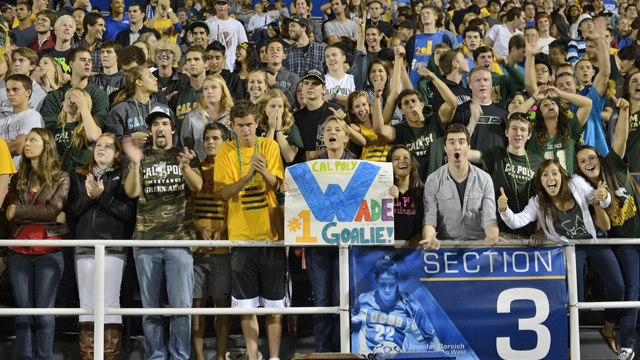 The Big West Conference is where good soccer fans go to have a party.

Perhaps that should be the slogan of a conference that’s comfortably in the national landscape for its outrageous attendance figures.

The UC Santa Barbara Gauchos lead the charge with some mind-blowing support every season. Harder Stadium’s slightly rusted veneer is a beacon of light for soccer fans that draws in the casual to the fanatic.

If Harder is the light, Cal Poly is the honey trap. The glitz and glam of Alex G. Spanos Stadium is difficult to overlook as one of the best places in the country to watch a game. Fans from far and wide are sucked into Spanos Stadium’s comfortable accommodations.

The rest of the conference follows suit with UC Davis selling out games (at the Aggies’ humble abode) with some regularity last season. Cal State Northridge(m) added some sparkling new renovations in the offseason. The list goes on and on.

All of this relates to the product on the field in a way. The Big West teams, for the most part, are built to entertain with free-flowing play and plenty of goals. This style does not translate to wins in the postseason where grinding out a close victory in the snow in November is a big qualifier for almost any College Cup appearance.

While the loyal supporters of these programs dream of those College Cup berths, the quality of play that has made Big West a fan favorite is not likely to change this season or for the foreseeable future.

From last to first? It may sound ridiculous, but the Gauchos finished in the last spot in the North Division last season after a tumultuous end to the season. The Big West preseason coaches’ poll pegged the Gauchos as the favorite this fall though.

Spring ball was promising with 2012 Big West Freshman of the Year Ema Boateng running the show at attacking midfield. Boateng took an extended vacation this summer and ended up signing a professional contract with HIF, a Swedish club, instead of returning for his sophomore season, much to the chagrin of Gauchos Locos.

Head coach Tim Vom Steeg was not left with many options on replacing the Ghanaian, who figured to be a big part of the attack. Early indications suggest UCSB will rely on a revolving door in the No. 10 role and more dependence on prized striker Achille Campion to finish his opportunities.

Campion and senior midfielder Fifi Baiden both made the preseason All-Conference team. They will need to play at a high level this season for the Gauchos to regain supremacy of the conference and an NCAA Tournament berth.

Freshman Drew Murphy is another key piece for the Gauchos. The LA Galaxy Academy product is versatile enough to fill a number of roles for UCSB, but probably looks best in a central midfield position. Fellow freshman Paul Ehmann still is a question mark heading into the season. As of last week, Ehmann, a product of the Borussia Dortmund Academy, is waiting on an appeal to NCAA to become eligible. (Update: The Santa Barbara News Press is reporting that Ehmann is eligible.)

UCSB opens the season with a tough road test against Northwestern on Friday.

The Aggies were the champions of the Big West North Division last fall. They commanded some first place votes in the preseason poll but not enough to overtake the Gauchos.

Last season, the Aggies relied on a handful of scorers without any one player emerging from the pack. UC Davis’ leading scorer only tallied three goals. Expect sophomore midfielder Eric Budniewski to take over a bigger role in the attack. Budniewski looked like the most dangerous player for Davis last season when he had the ball on his feet. Another season in college should add to his confidence in taking players on and trying to find the back of the net consistently.

The Mustangs open up the season on the road against Drake, Creighton, and UCLA - a very challenging schedule for Paul Holocher’s side right out of the gate. Claiming a winning record from that trio of games would be no small feat and a great tone to set for the season.

Striker Mackenzie Pridham is the player to watch for the Mustangs. Pridham had 11 goals in 2012 and caught the league by surprise with his ability to finish off chances in the box. MLS took notice of his exploits with Toronto FC reeling him in for an offseason workout. Another season at that level will get him on the radar of more MLS clubs.

George Malki is another senior with professional aspirations. The midfielder, who has appeared in 35 games over the past two seasons, trained in Sweden last summer, but probably needs a breakout campaign to gain domestic attention.

Freshmen Ariel Lassiter and Justin Dhillon are in line to contribute as well, which should help Pridham in the attack with a diversity of weapons.

Remember the Hornets from last season? Well, forget them because eight of the starters from last year’s squad are gone. Almog Strikowski, Gabe Silveira, and Isaac Ikyurav are the only returning starters. Silveira and Ikyurav led the team in scoring last year with five goals a piece.

The problem from Sacramento State is how they finished the regular season last year. Four losses in the last five games to end conference play. That included a loss to the Gauchos, which had already withdrawn from the postseason as a self-imposed punishment.

The second season in the conference should go a bit more smoothly for the Hornets.

The Matadors lost five starters from last year’s team, but still came in as the South Division favorite in the preseason poll. Seniors Edwin Rivas and Carlos Benavides have some interest from the professional level already. Benavides has proven his quality in the league with a league-leading 10 assists last season. Junior forward Sagi Lev-Ari is the other piece of the attack that makes the Matadors so good.

The question for Northridge will be defensively with so many pieces to replace. Head coach Terry Davilla has shown he is fully capable of building a deep bench and there will likely be some new faces that step in and fill roles swimmingly for Northridge this fall. An opening weekend clash against Memphis will test that backline immediately though.

The Anteaters struggled mightily in 2012. There is no other way to dissect last season for George Kuntz’s side.

The mystery is the talent on this team suggests it should be a much better team. Christopher Santana, Lester Hayes, Cameron Iwasa, and Pavle Atanackovic are quality forwards. Enrique Cardenas, Tarek Morad, Gor Kirakosyna, and Marco Franco make up a solid midfield. Matthew Tilley headlines a solid defense.

Last season really comes down to some bad breaks for Irvine. If the starters stay healthy this fall, the Anteaters should be in line to climb back into contention in the Big West.

Much of the Titans success may come down to individual brilliance this season. Can Ritchie Gonzalez breakdown the defense consistently? Will Ian Ramos find success on the wing to make the Titans attack somewhat of a threat?

These are some big questions that Titans need to answer to stay competitive in the Big West.

UC Riverside head coach Junior Gonzalez surprised a few people when he took a position with Chivas USA in the offseason. The Highlanders replaced him with Tim Cupello with the dreaded interim tag.

Cupello has a decent roster, and the possibility to make some noise in the conference if everything goes well. Goalkeeper Askhan Khosravi is arguably the best in the conference. Defender Eric Gonzalez was very good during his freshman campaign.

The out-of-conference schedule for Riverside is not too impressive, which means Big West success is the only ticket to a longer season.