Big win for Butler seen by not so many 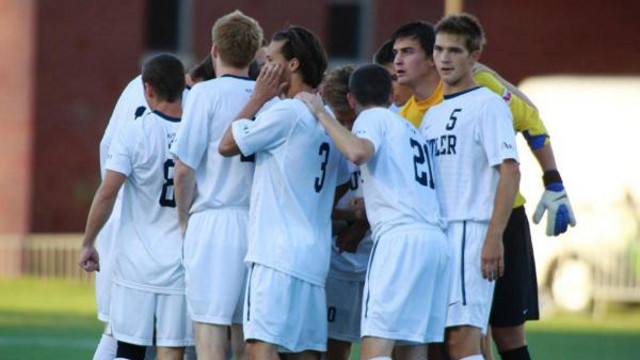 The above video gives a little glimpse of what was a fairly quiet scene last Friday at the Butler Bowl in Indianapolis. The host Butler Bulldogs were playing Richmond in an Atlantic 10 match. I was out looking to get a little electric college soccer atmosphere the way our man Reshad had done a few weeks ago.

Alas, our timing was off as the match was played during the school’s Fall break, so there were very few students on hand to take in the proceedings and/or engage in various acts of craziness. I’m told the Butler student body comes out in force for night games and so you’ll just have to imagine what it was like.

But we did get to speak with Butler goalkeeper Jon Dawson and forward Tyler Pollock afterward, and they did not disappoint.

In the game itself, Paul Snape’s team showed very well, winning over the Spiders by a score of 6-0. Along with Butler’s good play, with Richmond having announced that the program will be terminated at the end of the season, it has to be a tough season for that team.

Special thanks to Josh Rattray of Butler Sports Information for arranging everything for me on the evening, and also to the press box crew for some high-level banter during the match itself. Good conversation is one of my favorite activities and that group provided it in spades. Thanks everyone.