While the Wheaton women’s team held onto its top spot, the Messiah men joined its women’s counterpart from earlier this year by dropping out of the top ranking for the first time. That opened a path for Ohio Wesleyan, which stepped into the No. 1 ranking for the first time with an 11-0-0 mark. With parity like this, DIII is anyone’s game, which the men’s side got a taste of last week.

Here’s a look at some other big doings in the world of Division III men’s and women’s soccer. 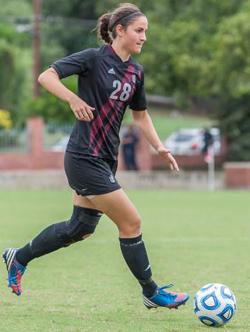 There’s impressive offense, and then there’s the numbers San Antonio steamroller Trinity has put up of late. Over its last four games, Trinity has outscored its foes an incredible 32-1. That includes a high-flying 6-1 win most recently over Austin College on Sunday that was perhaps even more lopsided than the final score indicated. Trinity scored its first goal six minutes into the first half and took its foot off the pedal once the game got out of hand in the second frame. Trinity out-shot Austin 49-4.

The Tigers, who were No. 5 last week, are now 9-1-0 and a perfect 4-0-0 in conference. With Wheaton holding onto the top spot, Trinity could soon be challenging the status quo at the top of the rankings with a run like this.

Turmoil is a part of life in the top ranks of Division III soccer, where even dynasties aren’t that far ahead of their counterparts on talent. That level of parity has cultivated a number of upsets early this season, including the fall from grace of a number of former top teams.

That has not included Amherst or Pacific Lutheran, both of which powered through difficult fixtures through the weekend to keep unbeaten streaks going. Amherst came into the weekend at No. 4 and fresh off a big double overtime win over rival Williams, and the Jeffs didn’t disappoint again this weekend. After posting a 2-0 win over Tufts at home, they went on the road and smashed Bates 3-1 to push their record to 7-0-1 overall and 5-0-1 in conference. That certainly won’t hurt the bottom line.

Pacific Lutheran did likewise, but with considerably more drama. In a battle against Willamette that stretched to overtime on Sunday afternoon, Lutheran, which came into the weekend at No. 6, witnessed probably the craziest end to a game anywhere in college soccer this week. The game was scoreless through 88 minutes before both teams scored in the final 123 seconds of the match to push it to overtime. The Lutes finished it off with Derek Johnson’s second goal of the day with minutes left in double overtime to push their record to 8-0-2 and 3-0-1 in conference.

The College of New Jersey women stumble in big upset

By far the biggest upset in the women’s game over the weekend happened in New Jersey, where then-No. 25 Montclair State upended No. 4 The College of New Jersey 1-0 to shake up the balance of power in conference and hand TCNJ its first loss of the season.

Now, Montclair State suddenly looks like a primetime contender, not just for the conference title but to become a player on the national stage as well. Thanks to a 70th-minute header from Shawna Grabowski, MSU is now a pristine 9-0-0 and 2-0-0 in the league. Further, it was MSU’s fourth win in 31 all-time meetings between the two rivals, and it came at a huge time. Shockingly, it was Grabowski’s second game-winner against TCNJ in as many years, and MSU suddenly has a winning streak against a team that’s had the upper hand in the fixture for years.