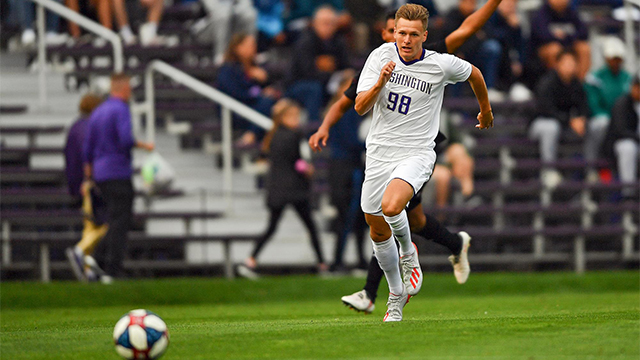 One of the best attackers in men's Division I soccer won't be back for the 2020 season.

Blake Bodily has signed a Homegrown contract with the Portland Timbers, as the Washington midfielder leaves after a stellar junior campaign.

"I'm very happy to see Blake take the next step in his career," Washington Head Coach Jamie Clark said in a press release. "He has worked tirelessly at maximizing his potential since arriving at Washington and has really made the most of his college experience. He was one of the best attacking players in the country last year and he is ready to play in the MLS. I know he will represent UW great in the years to come and we can't wait to see what he can do with the Timbers."

After a 2019 season where he scored 12 goals and notched six assists, Bodily became the first Huskie in 12 seasons to earn the Pac-12 Player of the Year. He was named to the TopDrawerSoccer Best XI First Team and to the United Soccer Coaches First Team All-American squad.

"We are excited to add a talented Homegrown player to the club in Blake,” Gavin Wilkinson, general manager and president of soccer for the Timbers, said in a statement. “He already has experience playing with T2 during his time with the academy, and has excelled in his development at the collegiate level. Blake will start with T2 with an opportunity to earn first-team minutes. We’re happy for Blake and his family and look forward to his continued growth as he begins his professional career.”

Originally from Eagle, Idaho, Bodily played three seasons at Washington (2017-19), where he tallied 17 goals and 18 assists in 56 games played (39 starts). He was named First Team All-Pacp-12 in all three campaigns. He played three seasons with the Timbers Academy, from 2015-17, before heading off to play soccer at UW.