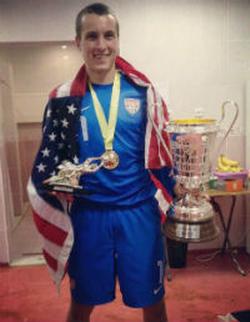 The Clemson men’s soccer program has made significant strides over the past few years, capping it off by winning the 2014 ACC tournament.

That’s not lost on some of the top players, as it helped to lure U.S. U17 MNT defender Tanner Dieterich, who recently committed to join the program next year.

"My thought from the beginning [of the recruiting process], I was stressing family,” Dieterich told TopDrawerSoccer.com. “Coach [Mike] Noonan put me at ease. The way he runs the team is like a family.”

Dieterich’s search for a tight-knit program was shaped by the fact that he’s spent the past year and a half away from his own family, either at Real Salt Lake’s Casa Grande Academy or with the U.S. U17 program in Florida.

The Tennessee native made the cut for the spring residency program and will be looking to battle out for a spot at U17 CONCACAF qualifying later this year.

He liked how Clemson stressed the important of not just the player.

"I looked at the overall value of the education, and they care about every person,” he said. “It will be [a] good [place] to develop as a person."

The center back is the first verbal commitment for the class of 2016.

Looking to stake his claim on the starting goalkeeper spot on the U.S. U17 Men’s National Team, Richmond, Va. native William Pulisic has his college future sorted after also verbally committing to an ACC program.

“It's a beautiful campus and the coaching staff has great history,” Pulisic told TopDrawerSoccer.com about choosing Duke. “It's the right place for me to get to the level and one day play professionally.”

Proximity to home was an important element to his choice.

"It's under three hours [to Richmond] and that was a big discussion I had with my parents,” Pulisic said. “My parents will be able to watch me, even on the road since it's the ACC."

With his stint in Residency occupying a lot of his time, making official visits slowed the recruiting process somewhat. But what he was back in Virginia, it was an important topic of discussion with his family.

"I was on the computer and the phone a lot with my parents, and every time I went home, that's what we talked about,” Pulisic explained.

The goalkeeper is the second player to commit to Duke for 2016.

A 6-foot-4, athletic center back, Maryland native Kyle Saunderson found the right DI program for him without straying to far from his roots.

“I decided to commit to UMBC because it is close to home, where my friends and family are, and it has excellent math and science programs, which is what I am looking to study in,” he said. “Also, I thought the campus was great and easy to get around.”

The school’s success last fall and its trip to the College Cup certainly helped spike his interest.

“The soccer program is doing extremely well right now, making it to the Final Four is crazy,” Saunderson said. “I really liked the coaches and thought they were all the kind of coach I was looking for.”

Six players are slated to join UMBC this year.

A versatile player who can line up as either a winger or outside back, Dallas native Eddie Munjoma found that the one local Division I men’s soccer program was the right place for him.

“I decided to commit to SMU because it has been my dream school for the better part of five years now,” Munjoma told TopDrawerSoccer.com. “Also I want to make good impression on the field as well as in the classroom and I know that I can.”

The defender, who has 11 appearances in the Dev. Academy season so far for the FCD U16 squad, considered leaving Texas for programs across the country. However, SMU’s high standards on and off the field kept him close to home.

“One of the main things I liked about the soccer program is that although we should be at our best on the pitch, academics is very much so a priority,” he said. “They are also very serious about building a program that surrounds itself with players that are capable of winning a championship and I want to be a part of a championship-winning side.”

Six players are currently committed to join SMU in 2016.

Midfielder Mario Murcia (PA Classics) committed to Goucher for the class of 2015.

Defender Connor Maki (IMG Soccer Academy) committed to Xavier for the class of 2015.

Defender A. Mickey Watson (Everton FC Westchester) committed to Loyola (MD) for the class of 2015.

Midfielder Griffin Kutzner (Oakwood SC) committed to Loyola (MD) for the class of 2015.

Midfielder Guyllain Kabala (New England Revolution) committed to Providence for the class of 2015.

Forward Antonio Williams (Waza FC) committed to West Alabama for the class of 2015.

Midfielder Jabari Newton (Montverde Academy) committed to Memphis for the class of 2015.