If the look and feel of the BYU soccer program that I saw on the university’s television station Saturday night was an illusion, then it was one of the most attractive and convincing illusions in the history of just about anything.

And while one match does not a season make, I’m pretty convinced the impression that Jennifer Rockwood’s team and the overall program are rocketing upward is very much for real.

If you missed it Saturday, the Cougars defeated a very good Penn State team 3-1 in front of nearly 5,000 fans who never seemed to let up in their very vocal support of the home team. The soccer played both ways was excellent, with a number of chances, 4 goals and some great saves by BYU goalkeeper Erica Owens. The full-time whistle brought on a prolonged celebration from fans and players alike.

Part of the enthusiasm no doubt came due to the team having struggled a bit last season, where it failed to qualify for the NCAA 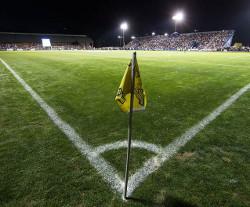 Tournament for the first time since 2004 and only the fourth time in the 17 seasons since the program went intercollegiate in 1995. Rockwood, who has been at the helm at the Provo, Utah-based team from the beginning, said last season’s disappointment, has played a major role in her team’s hot start (6-1-0)

“We played some great soccer at times last year, but we were too inconsistent, up for one game and not as much the next,”  Rockwood said. “We didn’t get a couple of results we needed at the end and we missed out. With a large group of seniors (9) returning for their final year, we were all motivated to work harder and prove ourselves.”

Another contributing factor has been tactics, with the Cougars switching to a more attacking-oriented system that has freed some offensive players such as Carlee Payne-Holmoe, Jessica Ringwood, Jaiden Thornock and Michelle Murphy to focus on the attack and not worry about playing in the defensive third.

“We did struggle to score goals last year and mostly we want to free up our attackers,” Rockwood said. “This way they don’t have to worry about coming back all the time. Jessica Ringwood for instance has always been such a great attacking player and we were using her more defensively. The girls are really picking up on this and seeing the advantages of this, and of course the defensive players and Erica (Owens) in goal have been good for us too.”

The poster moment for this philosophy may have come with the opening goal against Penn State, when Ringwood volleyed a terrific strike off a perfect cross from Payne Holmoe to open the scoring.

Payne Holmoe is a creative attacker who has scored 26 goals in her BYU career. She played club soccer in Northern California for Pleasanton Rage under Philippe Blin. She said increased confidence is a big part of her and the team’s resurgence this season.

“Last year was kind of hard. I wasn’t playing with confidence and the team wasn’t doing our best,” she said. “Before this season we kind of laid it down on the line to do better. We just have a lot of talented attacking players and this system plays to everyone’s skills and talents. I know if I look to go forward, they are going forward as well. A lot of it is just having the chance to be creative. So everyone is playing with confidence and so far it has been awesome.”

To listen to new goalkeeper Erica Owens talk, these players never let a shot through to goal, but in watching BYU’s win over Penn State Saturday, Owens had a major role to play, preserving the win with some top of the line saves.

Owens hadn’t played a half hour on the field in two previous seasons with the team, but she has looked outstanding so far this year. The junior from Salt Lake City said confidence has made a big difference in the defensive end for BYU as well.

“Our new formation is showing we put a lot of trust in the defense and midfield,” Owens said. “We don’t drop as many midfielders back anymore, but I think our team is so deep and solid, we are ready for anything.”

While that remains to be seen, all the evidence thus far is supportive of Owens statement. From Rockwood’s perspective, Saturday did involve crossing a threshold for her team.

“We’ve had some great crowds in the past, but Saturday was something extra,” Rockwood said. “To have a great team come in like Penn State that’s done so well, a lot of people came wanting to see a team likethat and to see how we could match up. The word spread how we played on Thursday (a 5-0 win over Texas), and then it was such a high-quality game with a lot of talented players on the field going after it. It was a great showcase to prove ourselves.”

The match commentators on BYU TV, Robbie Bullough and former BYU player Natalyn Lewis both marveled at the crowd and atmosphere on Saturday.

(Let me just add here that as someone who watches a lot of soccer on television, the work these two do along with their production crew is quite good.  I think a lot of networks could learn a lot about combining passion for the game with communication skills in presenting the beautiful game).

“There was an electric atmosphere and it started when the opening whistle blew,” said Lewis, who is definitely rooting for the home team on the air but never fails to give good information and be gracious toward the team’s opponents. “It’s almost unexplainable but everybody there seemed to understand the magnitude of the situation with a top-ranked, very skilled opponent.

“The girls came out and had a more intense warmup than I’ve seen from them in a while. They were very focused and that seemed to translate to the crowd, which was literally electric the entire game. The speed of play and the entire thing were coming together in a way that I don’t think anybody anticipated. I can’t imagine being Penn State and having to play in that.”

McCullough added that the TV coverage itself has helped grow the program at BYU, with fans around the world writing in to say they are watching. He added that the arrival of Real Salt Lake of MLS to the area has helped some longtime BYU fans also become soccer fans.

“Soccer has always been pretty popular at BYU, because they make it so fun to watch and Jen Rockwood has been so successful,” he said. “Jaiden Thornock told us she was watching soccer on BYU TV since she was 6. She has a good flip throw and she says she started doing that because she watched a BYU player do that on TV.”

Rockwood acknowledged that the TV network can be a big help.

“We definitely feel very fortunate to have the support we do from the very top,” she said. “The vice president of the school was at the game. Our athletic director is always here. BYU TV does a great job of getting the message out to the world about what the school is all about. Of course they all want us winning too, which is a little extra pressure but that’s OK. The announcers are both soccer fans who are at our practices and know the girls and really enjoy doing the games.”

Payne Holmoe said the team reveled in the atmosphere Saturday and is striving for more, but added that the squad knows they will still have to earn every success going forward.

“Playing in front of our fans is amazing,” she said. “They all knew how good Penn State was and we were able to feed off their energy. We are so lucky to have great fans and it’s exciting to play for them.

“We took the weekend to celebrate,” she continued. “We were all super-excited and took our time to enjoy how great that felt. I’ll never forget that game and it was one of the most fun home games I’ve ever had, but definitely we have to move on. There are more great teams ahead. Last year in the league we kind of played scared and without confidence. This year we know how good we can be and we’re confident that we can show how good we can be.”

“I think those games last week only added fuel to our fire,” She said. “Now we want to win even more, every single time.”

Rockwood said her message to the team is to remember what a joy it was to achieve at such a high level and to strive to do that again and again.

It says here that the BYU soccer is likely to follow that advice, both this year and beyond.