As far as underrated conferences go, it’s hard to think of one that flies under the radar quite like the Colonial Athletic Association does.

There’s little separating the top programs of the 12-team division, and while national recognition isn’t always available, last fall four teams made the NCAA Tournament, with James Madison managing to make it into the third round.

Of course, the coaches themselves are well aware of just how close the teams are within the conference.

“Playing in the CAA, it’s a marathon, not a sprint,” James Madison head coach Tom Martin told TopDrawerSoccer.com. “One or two, two or three games can influence the outcome of the season, but they don’t guarantee you’re out of the picture or you’re on top of the pile.”

A quick examination of the standings last fall reinforces that point. JMU, which captured the regular season title with a record of 8-3 in conference, was one of seven teams to win more games than they lost within the division. All but two teams won at least four games in conference as well. 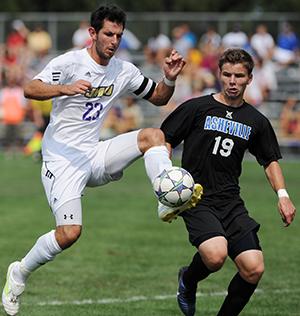 Add in the other programs, such as William & Mary, Virginia Commonwealth, Old Dominion, Delaware, Northeastern, George Mason and Georgia State, all who’ve achieved results on the national stage and there’s suddenly little reason to sleep on the CAA. That’s also what makes the spring season so important for these programs.

“We try to do two things in the spring – one, we try to find a couple players and by that I mean kids who were on the roster who either didn’t play or didn’t play much or didn’t get a chance,” Martin said. “And the second thing is you try to make players better.”

If there is a slight favorite to consider heading into the fall, it’s probably ODU, which features the attacking trident of Yannick Smith, Tim Hopkinson and Gideon Asante, a lethal trio that combined for 33 goals and 19 assists in 2011.

With the desire of pushing the envelope this spring to surpass the accomplishments of last fall – ODU lost in the second round to Indiana 3-0 – the Monarchs set up a difficult spring schedule that included games against William & Mary, along with USL Pro side Richmond Kickers.

“We feel like it’s been a very productive spring,” ODU head coach Alan Dawson told TopDrawerSoccer.com. “We knew coming into this spring it would be a real challenge to get some results, but in terms of our performance and our future I feel very good about it.”

With that talent comes lofty expectations, and Dawson understands the key to this fall is to hit the ground running.

“What we have to do first and foremost [this fall] is win some games outside the league; get off to a good start,” he said. “The college game is all about momentum.  It’s not a long season, you’ve got to get off a good start, have some confidence. We’ve got a very challenging [fall] schedule.”

Another up-and-coming team within the CAA is Virginia Commonwealth. Coached by former Akron assistant Dave Giffard, VCU has adapted a similar playing style to the Zips, placing the emphasis on attacking and possession soccer.

Heading into his third season this coming fall, Giffard is pleased with the strides his  team has made in the spring.

“I think that we were able to make some gains in the areas I felt like we could, so I think like I said for me overall it’s been a very, very positive spring,” he told TopDrawerSoccer.com. “It’s been our best spring thus far, and I think our team’s in the best spot it’s been since we’ve been here.”

Still, despite the presence of those schools, JMU is hoping to make it two straight regular season CAA titles. It’ll be an uphill task for the Dukes, with the loss of leading scorer Patrick Innes and goalkeeper Justin Epperson, a fifth-year senior.

But there are plenty of returning players, such as NSCAA All American Paul Wyatt, who were a part of JMU’s run to the third round of the NCAA Tournament and want to do even better this fall.

“Even with a couple key guys leaving, the kids that are returning that had a hand in the run last year, they want to do just as well if not better,” Martin said. “It’s all about setting goals and coming up with an action plan to try and reach those goals.

But it’s far from a two or three team race. Delaware, while losing offensive engine Evans Frimpong, returns forward Roberto Gimenez, and William & Mary is always a threat to challenge for the top spot.

Regardless of how the rest of the spring and summer plays out, there’s certain to be plenty at stake when the CAA returns to action in the fall.

Paul Wyatt, James Madison, Midfielder: Listed as a forward, Wyatt has found himself playing more of a central midfield role in the Dukes and is likely to feature there again in the fall. As a senior, his leadership and offensive abilities are going to be key to another successful year.

Yannick Smith, Old Dominion, Forward: Consistency is the key for Smith in 2012. The fleet of foot forward bagged 16 goals last fall, six in two games and ten across 11 CAA matches. The closer to 20 he gets this fall, the better ODU’s season is likely to be.

Jason Johnson, Virginia Commonwealth, Forward: There’s no doubting Johnson’s scoring ability, as he grabbed 11 last year for the Rams. However, he needed 80 shots on the year to do that, most in the CAA, and good for a conversion rate of just 14 percent. Becoming more clinical in front of the goal is going to be crucial for VCU’s CAA hopes in the fall.