Last year was the year of William & Mary, as the Tribe managed to cruise to both a regular season and tournament championship.

This coming year might not look a lot different, and with the loss of VCU to the Atlantic 10, W&M remain favorites for a second straight title. However, the other schools can’t be counted out, with James Madison, Delaware, George Mason and Hofstra all within the discussion as well.

Voted nearly unanimously as the preseason favorite to win the conference, William & Mary’s strength lies in their experienced talent coming back for 2011.

Returning All American forward Mallory Schaffer is the most notable to come back. She snagged several individual accolades after a tremendous 2011 season where she scored 17 goals and added 6 assists. Junior midfielder Dani Rutter (7 goals, 11 assists) is also back.

Of course, a couple players did leave, including starting goalkeeper Katherine Yount, so there will be competition for places during the 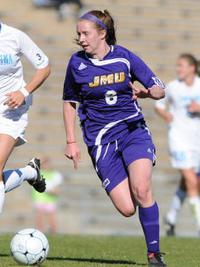 preseason, as the freshmen try to snag spots in the starting lineup.

“We’ll have an interesting battle in goal, we have a very good freshman coming in and a senior who’ll be battling for a starting spot,” head coach John Daly told TopDrawerSoccer.com earlier in the year. “I expect a couple of the freshman to step in and challenge right away.”

The Blue Hens, while slightly overlooked in the preseason voting, could find themselves near the top of the CAA once again if all goes well.

Amy Pickard has graduated, a forward who clicked nicely with the returning Ali Miller upfront, leaving a big gap in the team’s offense – although Miller’s 12 goals from a year ago are sure to help stem that loss.

Midfielder Tania Domingos is also likely to play a big role, as Delaware will be able to rely on an experienced core of eight seniors this year.

The Patriots defense, which conceded 28 goals in 2011, needs to be slightly better if they want to keep themselves near the top of the league.

Up front, Tiana Kallenberger’s senior year should be a big finale and drive the offense, while defenders Mary Kate Lowry and Paige Babel will be instrumental in figuring out that improvement at the back.

Figuring out a way to cope with the graduation of forward Laura Greene is priority one in preseason, as her 13 goals will surely be missed in the attack.

Brooke Bendernagel and forward Sam Scolarici can help the team make up for the loss of some pretty significant talent, but the underclassmen will really need to step up if Hofstra is to find a way to surprise people this fall.

The offensive responsibility is going to fall on the shoulders of rising senior forward Greta Samuelsdottir, whose eight goals earned her third team All Conference honors last fall. She and the graduated Veronica Napoli accounted for 18 of the team’s 26 goals, so if someone can’t step up to aid Samuelsdottir, it doesn’t bode well for the Huskies.

Goalkeeper Paige Burnett should be able to keep her job in goal after an outstanding freshman season earned her third team honors in the conference.

Bringing back significant talent generally means higher expectations for any college program, and JMU falls into that category with the return of players like Lauren Wilson (8 goals, 6 assists last year) on a team that missed out on the tournament last year.

And the players that did go, head coach Paul Lombard is confident that he can cover those with either freshmen or players on the team last year.

“We feel pretty good about being able to kind of cover the positions that all four of those played from within, and then obviously you bring in hopefully some freshmen that I’ve learned over the years you take freshmen at face value,” he told TopDrawerSoccer.com.

Defenders Shannon Rano and Becky Sparks are going to ensure that things remain tight at the back as well, as the Dukes aim to knock William & Mary off the top spot.

There are eight seniors on the Dragons roster, giving the team plenty of experience heading into the fall. One of the keys to the season is winning games on the road – Drexel put together an undefeated home record of 5-0-3, but won just one game out of eleven chances on the road.

Making that task tougher is the graduation of top scorer Jenna Lindsay, although sophomore midfielder Megan Hammaker is certain to take on an even bigger role and help the team improve in the attack.

There’s a new coach in town, and that is certain to add a wrinkle to the CAA as former GSU coach Domenic Martelli’s contract wasn’t renewed at the end of the 2011 season.

Derek Leader has taken his spot, and the former associate head coach with SMU will look to lead his program to new heights in his first season in charge. He’ll need to further harness the attacking talents of Jewel Evans to help make that goal a reality in year one.

The future is bright for the steadily improving Towson side, and with just two seniors on the roster, things should only get better – but will that include this year?

Led by co-captains Cheyenne Skidmore and Amanda Novy, improving at the back is extremely critical, as the Tigers scored 31 goals in 2011, but by conceding 37, weren’t able to thrust themselves into the mix of top teams in the CAA. If that second number comes down, they’ll climb the ladder.

Finish strong – that’s what this year’s Old Dominion team will want to achieve after dropping five straight conference games to end 2011 and erase any hopes of a winning record.

Ashlee Coutu needs to have a big year if the Monarchs are going to finish on a high before departing for Conference USA next year.

Not much went right for UNC Wilmington last year, and it shouldn’t be too difficult to bag more wins this year. Scoring goals was one of many problems, as the team netted just 12 tallies in its 19 games. Raise that by at least five and some of those losses could become wins or ties.

Returning leading scorer, Stephanie Rose (5 goals) needs help from some of her teammates if that number is to increase, of course.