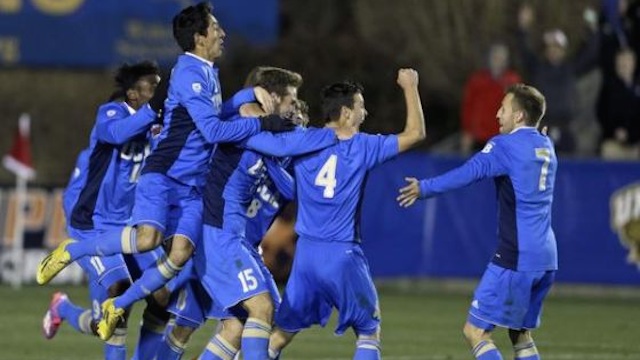 CARY, North Carolina — UCLA’s been penning frantic Hollywood endings to its finishes all postseason. The Bruins added another chapter Friday to a story that’s rolling right into the College Cup title game.

UCLA punched its ticket to the championship game with a wild 3-2 double overtime win over Providence that Chase Gasper won on a goal with five minutes left in the last OT. That sets up a tantalizing matchup between traditional powers UCLA and Virginia in the finale. The two have 10 national titles between them, and they met in a 1997 title game UCLA won 2-0. The Bruins can add their fifth national title and first since 2002 if they triumph.

It took a Herculean effort just to push the Bruins to the final stage. UCLA took a 1-0 lead in the 43rd through a poacher’s effort from Larry Ndjock, but Providence elbowed its way into the lead via a pair of Mac Steeves goals less than 10 minutes apart in the second half. The Friars took that lead into the final 10 minutes before Njdock popped up again with a header he plucked off a deflected cross from Abu Danladi.

The game, so evenly fought throughout, took that back-and-forth tenor into the overtime periods. The first one passed without incident, but UCLA found a winner from an unlikely place with just five minutes left. After a corner missed on the first go, defender Chase Gasper took a hack at the carom just outside the box, and it deflected off Brandon Adler and into the net.

“Tonight’s match was basically a microcosm of what our season has been like,” UCLA coach Jorge Salcedo said. “We had some moments of real quality. We had some moments where we had some difficulties in the match. But I attribute the challenging moments we had to the quality of our opponent. I thought Providence was a very, very good team... It ended up being a fantastic soccer match.”

As for being used to the nerves of the stage, that came into play as well. The Bruins needed overtime to beat San Diego in the second round, hung on to beat California the next game and gave up a 3-1 lead only to beat North Carolina in penalties just to make it to Cary. This one didn’t make it to penalties, but the enormity of the stage was no less present. The Bruins took it in stride.

“I guess we’re used to it now,” Gasper said. “At the end of every game, when we go into overtime there’s just positive reinforcement from the coaches, from the players, great team chemistry. You’re not worried, you just know that with the group of guys you’re going out with, you’re going to get it. If you just stay positive and keep working hard, good things have happen and they will continue to happen.”

Providence wasn’t set up to dominate possession, and UCLA did have the better of the ball for the majority of the match. But that didn’t stop the Friars from pushing numbers forward and pressing a Bruins back line that’s struggled to keep teams out of the net this postseason. Through massive hold-up striker Mac Steeves, Providence was routinely in dangerous positions that forced the Bruins’ shaky back line to make decisions. On at least two occasions, they weren’t the right ones.

Statistically, Providence matched UCLA stride for stride. The Friars and Bruins both had 12 shots, and Providence won the corner battle 7-3. The Friars felt they left unfinished soccer in Cary.

“Right now we are very disappointed not to be playing on Sunday,” Providence coach Craig Stewart said. “I feel like we deserved more. I thought on the day we were the better team, and that’s not to take anything away from UCLA, because they are a fantastic team and they have talented players. I thought we were excellent and I couldn’t be more proud of them.”

Providence pushed UCLA in the first half and crafted an even game that featured witty back-and-forth on-field repartee that didn’t favor either team. The Friars’ best chance came halfway through the first half through Fabio Machado, who tightroped down the endline and fired in a rocket cross that Steeves missed by mere inches.

But UCLA was first into the net. Ndjock pounded down the right flank off a feed by Danladi on the eve of halftime, and Providence keeper Keasel Broome squared off Ndjock’s first effort close in. But the ball bounced right back to Ndjock’s feet, and the German cut the tight angle to take a 1-0 lead into the half.

But Providence bit back hard. In the 65th minute, the hard-charging Friars equalized through Steeves’ first effort, a header he redirected by bodying off his defender and finishing past Earl Edwards. He hit again in the 74th when Thomas Ballenthin found him inside the box and Steeves crushed one far post that UCLA couldn’t get to in time. Suddenly the Friars were 15 minutes from knocking off the No. 2 overall seed.

“I think we played really well, and it was good that we got the equalizing goal and then the goal to go ahead,” Steeves said. “Give credit to UCLA for getting back in the game to put it at 2-2 to send the game to overtime. I thought we played well as a team and it was a full team effort, and I’m proud of every player on the team.”

UCLA saved its season via a bounce that fortuitously found Ndjock again. Danladi, who had a tiger of a game, whipped in a cross that bounced off Adler and spun to Ndjock, who was all alone in the box and had a simple headed finish to knot the game in the 81st minute. That kind of right place, right time mentality got UCLA through yet another difficult matchup.

“It was very important that me and Abu had that partnership, that we held the ball up for the team up top,” Ndjock said. “It gave us some confidence to build, to bring Leo (Stolz) into the game, to bring our outside midfielders into the game. Luckily at the end we got away with the win.”

UCLA’s had tough luck getting back to this stage since its last title in 2002. The ever talented Bruins have only made the College Cup twice since then. They lost to UC Santa Barbara in the finale in 2006 and were dropped by North Carolina in penalties in the semifinal in 2011. Now, the gilded program with four national titles will look to add some varnish with a fifth on Sunday.

“In three games we’ve scored three consecutive goals, but obviously we continue to give up some goals, and while it’s entertaining I’m sure for the fans, it’s getting pretty difficult on me,” Salcedo said. “But it was a great game and two teams that should be proud of their performances. And I expect the championship, the national final against Virginia to be a fantastic soccer game.”