Carolina vs. Real Maryland – a look at players Rockville, MD – In a battle of two unbeaten PDL teams, the Carolina Dynamo beat the Real Maryland Monarchs 2-0.  With the 2 victories against the other 2 top teams in the South Atlantic conference, Carolina has the inside track to qualify for the US Open Cup.

After a scoreless half, Carolina finally punished Maryland for their mistakes for both goals.  However, neither team played exceptionally well which was disappointing for me given the quality players involved in this match.  There were infrequent moments that were entertaining, but long stretches that were unacceptable.

Carolina Dynamo Observations:
In the 67th minute, Freddy Gomez (Guilford D3) opened the scoring.  The play started with Sam Redmond (Wake Forest) getting the ball wide to Karo Okiomah (High Point), Real Maryland Monarch left back Draymond Washington (George Mason) had a touch but misplayed the ball and Karo Okiomah was able to get behind Washington with the ball.  Okiomah crossed the ball to the top of the box and Gomez one touched it into the goal. 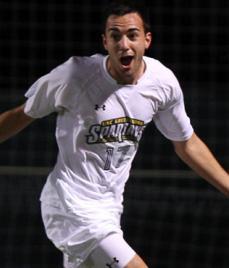 Hakan Ilhan
Two and half minutes later, Hakan Ilhan (UNC Greensboro) capitalized on another defensive mistake and coolly finished his chance.  The play started with Eric Drewenskus (Duquesnue(m)) losing the ball deep in his defensive corner to Robbie Lovejoy (North Carolina).  Lovejoy flashed to the end-line with defenders converging; he got the ball centrally to Ilhan who stepped around the on-rushing goalie and slotting the ball into the open net.

Karo Okiomah had a difficult time finding his game. He just wasn’t clicking with the team.  Minutes before the first goal, the Carolina Dymano coach Marc Nicholls observed that Washington was having a poor game and moved Karo over to the right side to use his speed to get by him.  It was an effective tactical decision given the first goal.  In the 60th minute, Okiomah fought off a clumsy tackle by Shane Johnson (Longwood) and he was able to get up and accelerate away from the pressure.

Redmond started slow, but his passing improved as the game progressed.  He continues to be a gritty player that thrives on the physical aspects of the game.  Redmond is tougher than Hunter Hayes knocking him off the ball.

I liked seeing Donnie Smith (Charlotte) playing left back – as opposed to his normal left midfield with an eye toward his future.  He had a hard time marking Ndaw Aboubacarim with his abundant speed.  In the 68th minute, he passed the ball centrally and accelerated into open space to initiate an attack from the back.  If Smith plays left back in his senior season and continues to progress as a defender, he has a good possibility of being drafted in January.

F Okiomah explodes up the line.  He caused Washington to be tied in knots trying to defend him with Okiomah’s feints, step-overs and simple dribbling moves. At times, Fejiro is running too fast and loses control of the ball.  He’s a strong player shedding a physical confrontation with Christopher Saul (Syracuse) in the 49th minute.

Goalkeeper Scott Goodwin (North Carolina) positions himself well to handle some scorching shots in the first half to keep his team level.

Lovejoy impressed me with his acceleration, change of direction and passing.  He’s quite good.  While he beat Washington touching a ball past him in the 51st minute, Washington was able to recover with his superior athletic ability.

I did not realize how young Jonathan Campbell (North Carolina Freshman in fall of 2012!) was until I looked up his college and discovered he’s going to be a high school senior in the fall.  He was steady, especially considering that he was facing a player that was strong, fast and powerful.  I liked how Campbell confidently intercepted passes with well-timed movement.

The Real Maryland Monarchs offensively are too static – standing in space waiting for the ball – is just too easy to defend.  They were better running off the ball in the second half, but it was still a major deficiency that they’ll need to solve. 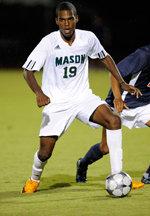 Draymond Washington
Draymond Washington (George Mason) is a fantastic athlete who has the potential to become a force at left back, but he’s very raw.  Last year, he asked to move back from forward to left back.  It’s a smart decision for him (and for Mason).  From what I saw in this game, he hasn’t gotten significantly better as a defender.  He mis-times going for balls that he doesn’t get to first and allows the attacker and the ball to get by him.  His touch was off and he was too slow in distributing.  Over-all, he had a dreadful game.  Washington has 6 months to improve to demonstrate that he has defensive competency before his collegiate career will be over.  He’s worth checking back later in the fall, because of his special athletic ability.

As disappointed that I was with Washington’s performance, Ryan Gracia (George Mason) seems to be back where he was 2 years ago after coming off injuries early in 2010.  His tight, accelerating turns are impossible to defend.  Gracia had one of the best shots in the first half for the Monarchs.  In the 13th minute, Gracia plucked a ball out of the air, hitting the shot on a string first time from 15 yards.  Goodwin tipped the ball wide.  I like Gracia’s passing and decision-making.

Gracia created the other quality opportunity of the first half. In the 20th minute, Gracia fed the ball into space for Ndaw Aboubacarim who unleashed a rocket that if Goodwin didn’t deflect may have broken his ribs – the shot was that hard!

Aboubacarim is a powerful player with speed, size and skill.  In the 52nd minute, he tried the “exciting” bicycle kick, but missed the ball.  I’d prefer a less flashy more effective play.

Julio Arjona (George Mason – it’ll be announced officially this week that he’s transferring from West Virginia) played with more confidence, moving better than I’ve seen him at West Virginia.  Arjona and Alex Herrera (George Mason) combined well and could be a potent pair in the fall.  I’d like to see Arjona move quicker, anticipate more and improve his foot speed.

Herrera is a quiet, subtle player that has exceptional skill.

Goalkeeper Dustin Butcher (George Mason) was let down by his defense.  I don’t blame him on either goal that was scored.  However, a superlative goalkeeper may have made a play on these shots.

Goalkeeper Paul Killian (West Virginia) continues to sit on the bench whenever I attend one of his games.  For the last several years, Zach Johnson (who decided to take an engineering job in Morgantown rather than pursue a MLS developmental contract) has been the West Virginia starter and this spring Killian didn’t play against VCU.  Some day, I’d like to see Killian play.

Andy Streinlein (UMBC) is a competent defensive midfield, but he lacks the intuitive knack for running into the proper space off the ball.

Hunter Hayes doesn’t track the ball well.  He started the game with a clunky trap, immediately losing the ball in the 1st minute.

In the 45th minute, Sean Coleman (Johns Hopkins D3) toe poked a ball over the cross-bar.  I’d like to see Coleman advance the ball when given space rather than kicking the ball long in the 15th minute.

Travis Pittman (West Virginia) jump-started the attack when he entered the game in the 81st minute.  Why, not earlier?  It seemed a waste of talent to sit on the bench, when Real Maryland desparately needed an offensive spark.  In the 90th minute, Washington advanced the ball to Herrera who laid the ball to Pittman who made a terrific turn, but his shot hit the post.