Cinderella vs. Champs highlights 3rd round All third round games to be played on Sunday 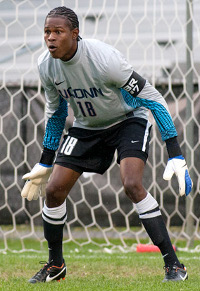 The dream is alive and well in Teaneck, New Jersey.

After a tumultuous season that ended with Fairleigh Dickinson entering the NCAA Tournament at #108 in the Ratings Percentage Index (RPI), which was third worst among the field of 48, the Knights have rattled off two upsets in the postseason to unexpectedly reach the Sweet Sixteen.

The defending champions stand in the way of the Knights duplicating their best showing in the NCAA Tournament history.

On paper, North Carolina is obviously the favorite. The Tar Heels are undefeated at home this year and only let in one goal in 13 games.

But there is something about a Cinderella story that throws all those statistics out the window.

This is a rematch from earlier this year, as the two powerhouses of Indiana soccer faced off on September 26 with Notre Dame claiming a 1-0 win.

This time around, Indiana is going to need to take the game to Notre Dame. The Hoosiers have the talent to boss the midfield of the Irish, but being aggressive on the road is a risky move especially against Notre Dame’s capable attack.

Since freshman Dillon Serna was moved from left back into an advanced attacking role, the Akron Zips are 15-0-0 with only two goals conceded. There are a number of reasons why Serna is not the only piece of the pie to that success, but he is the key moving part for the Zips attack. The Colorado Rapids Academy product opens up the field for the rest of the Akron attack.

Like most of Connecticut’s games this season, Andre Blake is the key in this fixture. New Mexico is going to get chances to score, and probably early in this contest. The Lobos attack is too dynamic and powerful for a Huskies defense (without Josimar Sanchez) to stop for 90 minutes, so it is on Blake to frustrate the Lobos with his spectacular saves.

Despite being from the same conference, these two Big East squads did not meet this year.

The fresh approach could be good for the home side, which did not show well against a physical Charlotte squad in the second round. The Hoyas need to get back into their rhythm and dictate the play in this clash.

If it were not for FDU, San Diego would be the biggest surprise of the postseason.

The Toreros started the year 2-6, and every one of those losses was U.G.L.Y, but something clicked in conference play and now San Diego is 11-2 since September 30.

The challenge for Tulsa is staying sharp for 90 minutes because the Toreros will punish for a momentary lapse in concentration.

Louisville head coach Ken Lolla lives for the postseason. His teams have this ability to take their game to another level once the words NCAA Tournament are thrown around.

Northwestern is no pushover though. The Wildcats have been extremely impressive in the first two rounds with wins over Western Illinois and Marquette.

Off the field, Maryland is dealing with a move to the Big Ten in 2014, which might be a big enough distraction for Coastal to knock off one of the College Cup favorites.

Coastal does not play the style that has typically given Maryland trouble though. The Terps struggle with high pressure, bruising defense that can nip one on the quick counter. Still expect the underdogs to keep this close until the late stages.