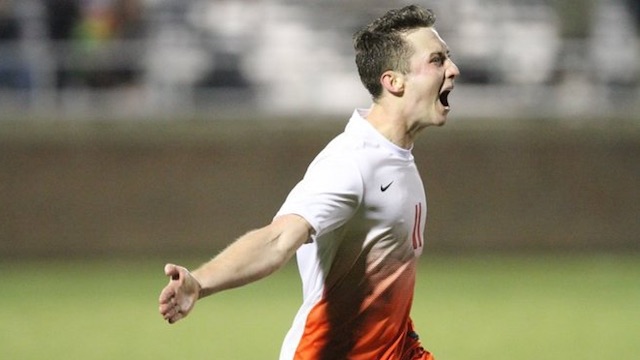 The gears churning behind the orange machine are legion. Clemson’s central defensive pairing of Patrick Bunk-Andersen and Kyle Fisher is among in the nation’s smoothest. Senior midfielder Paul Clowes is the calm, beating heart in the central midfield, brushing away attacks and jump-starting them in equal measure. Keeper Andrew Tarbell, fresh off a successful penalty kick round against Syracuse in the semis, might be the hottest keeper in the nation over the final month of the season.

When Clemson meets Stanford at 2 p.m. ET on Sunday for the right to hoist the title trophy, the Tigers can rest assured they were pulled to the precipice of the finish line by a bevy of different ropes.

But there’s a pipeline running through Clemson from the south that isn’t quite so obvious. The connection between Montverde Academy and Clemson is not to be underestimated.

For the uninitiated, Montverde and its internationally renowned SIMA program in the Orlando, Florida area has rapidly developed into a mecca for soccer development in its own right. It misses out on some national news because it largely competes as an independent, separate from the Florida High School Athletics Association and the U.S. Soccer-run Development Academy, but worth of mouth is spreading.

Fueled by jaw-dropping YouTube reels and a growing list of Division I recruits and pros alike, there’s an argument brewing that there is not a single better place to catch a potential professional than a Montverde boys soccer game. Entering the 2015-16 season, the boys varsity team had not lost a match in 117 consecutive games. It is fast approaching the all-time national record.

Clemson was a natural beneficiary of Montverde’s rise, but the road ran both ways. Mike Potempa heads up the program at Montverde now, and he left Clemson in 2010 to do it. That left current Clemson coach Mike Noonan in good stead with a program harboring international ambitions.

Considering the relationship Noonan and Potempa share, Clemson put its faith in Montverde, and Potempa trusted his former program to leave them in good stead at the next level.

“Mike (Potempa) is a very good coach,” Noonan said Saturday. “I knew he was starting something down at Montverde. I’ve known Mike since I tried to recruit him, so there’s a relationship that’s been built there over some time. But I think he’d tell you we were the ones who trusted in him too. We were the first ones to really understand what was going on down there. Now he’s placed players throughout college soccer all over the place.

“That’s part of our team, there’s no doubt. But the majority of our team plays with a tiger paw on their shirt, not just from one place.”

And they’ve made their presence felt this year. Moreno started the semifinal against Syracuse and his role has gradually increased as a creator in the middle. Chinchilla and Campos have been vital creative injections off the bench - and, at times, in the starting lineup - while the others have gotten their shot as well.

Stanford presents a bevy of issues for Clemson. The Tigers’ back line is as good as any, but Stanford presents a different challenge going forward. The Cardinal, led by speedster Jordan Morris, are big and fast, and Clemson has to adjust with just a day of preparation in hand. Stanford lagged back and played longer against Akron out of necessity, but the Cardinal could be expected to own a greater share of possession on Sunday.

How Clemson responds to that brutish Stanford attack will determine whether the Cardinal’s scoring woes stretch into Sunday or not.

“I think when you go into these games, both teams are revved up, and the first 10 minutes is usually more territorial than it is possession,” said Fisher, one of the top MLS defensive prospects in the 2016 MLS SuperDraft pool. “One you get into the game, then you can start playing and try playing it from there. (Against Syracuse) we didn’t really get into that rhythm. We were on the back foot most of the first half, and the second half we made adjustments and it got a little bit better from there. Due to nerves and everything else.”