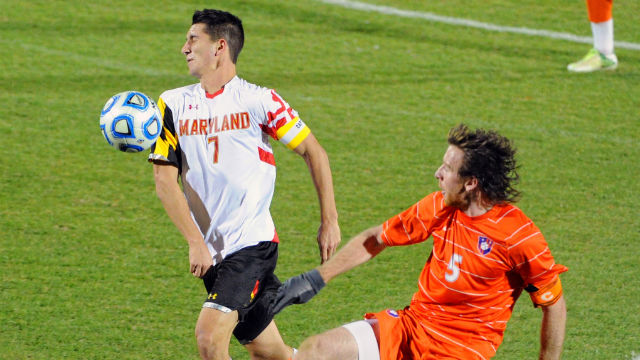 In the wake of another one-goal defeat in the ACC semifinal against Maryland last Friday, Clemson had to wait until Monday to find out if the words from Terps head coach Sasho Cirovski would be praise or prophecy.

“For sure they are an NCAA tournament team,” he said after the 1-0 win. “They’re one of the better teams we’ve faced over the year, and we have a lot of respect for them. They’ve pushed us and they’ve stretched us and they’ve made us better.” 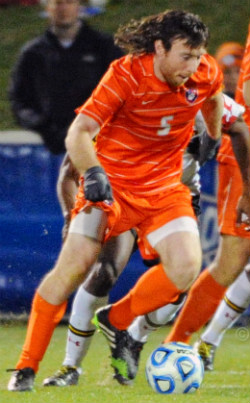 On Monday the good news came for head coach Mike Noonan and the rest of his squad: they would live to fight another day. The Tigers earned an at-large bid – one of six ACC teams to make the tournament field – and face Elon away from home on Thursday night.

It marks the first NCAA tournament appearance for the two-time national champions since 2006, and the first under Noonan, who is in the middle of his fourth year in charge. While recent accolades have obviously eluded the program, Clemson won national titles in 1984 and 1987 and has seven College Cup appearances.

Before learning of his NCAA fate this year, Noonan was still optimistic that the prestigious program is trending closer towards to the top echelon of Division I soccer.

“There is no question that the program is growing,” Noonan said. “And what we are doing at Clemson is something that hasn’t been done in a while. Trying to bring back and restore the tradition, one of the greatest college soccer programs in the country is a daunting task.”

A significant key to this year’s success has been the addition of one of Noonan’s former players, Thomas McNamara. The attacking midfielder, who leads the team with seven goals and eight assists, first played for Noonan at Brown back in 2009.

After McNamara’s freshman season at the Ivy League program, Noonan left to take over at Clemson. When the midfielder received another year of eligibility after completing his Ivy League degree – he suffered a season-ending injury his junior year and was allowed a medical redshirt – he reached out to Noonan and elected to reunite with his former coach at Clemson as a graduate student. Also joining the program from Brown was midfielder Bobby Belair, who played in 16 games.

McNamara’s move has paid dividends for both coach and player. The college veteran tends to roam from his attacking midfield spot. He can connect with his teammates in the final third and unlock opposing defenses with a final pass and handles Clemson’s set pieces. It’s given Noonan a more dynamic offense and allowed McNamara to test himself at a higher level, a challenge that he’s risen to. McNamara was named First Team All-ACC, becoming the first Tiger to earn that honor since Dane Richards in 2006.

“It is a nice change of pace,” McNamara said of coming to Clemson and the ACC. “I think I like it a lot better. It is nice to get to play the top teams week in and week out. There is no game where you go into thinking we will get through it and get the win. It is not like that in the ACC. So it is nice every day at practice you have to be giving it your all, playing your best.”

Of course, it’s been more than just the addition of McNamara that has led to a tournament bid. Center back Phanuel Kavita is a calm, composed and athletic defender who tops the team in minutes played. Sitting alongside him in defense is Third Team All-ACC and sophomore defender Kyle Fisher, who also provides a set piece threat. Midfielders Manolo Sanchez and Ara Amirkhanian have helped sparked the attack from deeper position, while senior Jack Metcalf does some of the grunt work in the back.

Adding players like McNamara – not to mention making it to the tournament – is certainly going to reinforce the notion that Clemson is here to stay, and only going to continue to get better.

“Having people like Tom and a couple of people we have on our team come into our program shows that we are going to do this consistently,” Noonan said. “When you look at where we have been and where we have come to I think we have the respect of all the other college teams.”

But Noonan knows that they need to keep putting the work in on all fronts in order to not only maintain this level, but also keep things moving forward.

“The overall picture is you have to do everything every day,” he said. “You have to look at every day as a new day. Work exceptionally hard. Clemson has a lot to offer. It is an excellent academic institution; it is a wonderful sports program, athletic program. Recruiting is an important piece to it. Also you have to develop players, which is something we consistently do at Clemson. Players come to our program and get better. It’s about pursing excellence. I think our players have adopted that.”