Coach did not want to know about milestone The Denver college soccer team was headed to the bus last Friday after a 3-0 win over New Mexico State(w) when one player pulled out her phone and saw the big news.

Their head coach Jeff Hooker had just won his 300thgame as a college coach.

There was no cake or balloons. The low-key celebration is just what the coach wanted from the occasion that he did not even know was coming. 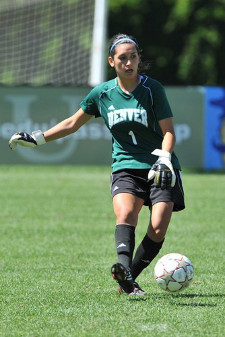 “I didn’t even know about it,” Hooker told TopDrawerSoccer.com. “Our Sports Information Director Niko Blankenship knows that I don’t like to know these things.”

Even though neither the players nor coaches knew about it, the suspense was building for the occasion for those around the program. Denver was held to a draw in its two previous games before the historic victory on Friday.

“He has brought this program a long way,” senior goalkeeper Lara Campbell told TopDrawerSoccer.com. “All the girls were really happy for Jeff [Hooker] when we found out. He really cares about us on and off the field.”

In his 21st season with Denver, Hooker, the longest tenured coach at the university, continues to build a program into a family. Campbell reflected on how the coach regularly invites the team over to breakfast at his house where he would cook as one of her lasting memories.

Campbell is a four-year starter with the Denver program, and recently claimed a program record of her own.

“I think that says a lot about our defense,” Campbell said about holding the record for career wins. “That record could not have been done without everyone working together.”

The Pioneers are 10-1-4 this season, which the coach attributed to an older roster with strong leadership.

“We were very young last year – a lot of the impact players were young,” Hooker said. “Senior leadership is something that might have been lacking.”

With Campbell and four other seniors, the Pioneers are rolling along with a 14-game unbeaten streak even playing in a new conference.

“Made things a lot more interesting,” Campbell said about the conference move. She went on to explain that these new opponents have worked to Denver’s advantage with a fresh take to conference games where no game can be overlooked.

The Pioneers went 9-2 in Sun Belt Conference play last year, but missed out on the NCAA Tournament due to a low RPI and a loss in the semifinal round of the conference tournament.

This year, Denver challenged itself with a tough non-conference schedule, which has put the Pioneers in at #28 on the TopDrawerSoccer.com Tournament projection.

However, Hooker skirted any talk about looking ahead to the NCAA Tournament and said the main concentration was securing the top seed for the conference tournament.

“That is the goal,” Hooker said about making the NCAA Tournament. “You don’t really ever know with the RPI. Weird things happen and we don’t want to put it in the committee’s hands. Our goal is take the #1 seed in the conference tournament.”

Hooker might need to get to 304 wins to get that top spot. Denver is currently third in the conference with a 2-0-2 record and four games remaining in league play.

Despite not wanting to know about the milestone, Hooker was glad and grateful to have accomplished it with Denver, where he was thankful to all those who have mentored him over the years.

“It has been the leadership of the university,” Hooker said about his lasting memory from his time there. “It is the people that I have been able to deal with that have let me grow.”

He went on to specifically cite Chancellor Daniel Ritchie, who really committed to making the sports program important to the school, and a few athletic directors who turned a former professional soccer player into a top college coach.

“I never wanted to get into it,” Hooker said about coaching. “I started here with no coaching experience. I needed some mentors.”

For a man who never envisioned following the coaching profession, it appears to have turned out just fine for him.