Preview: The numbers would indicate that the Nittany Lions will take the attack from the get go, as Penn State ranks first in Division I in scoring offense with 2.92 goals per game. 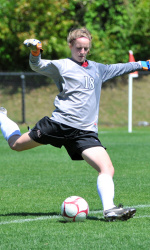 Florida State, on the other hand, is the top ranked defense in the country with a .739 shutout percentage. The Seminoles have showed in the postseason that they can attack with 14 goals in four games so far.

Hardly to suggest that the Seminoles will sit back, but there is some indication that the Big Ten program will try to take control over the midfield and dictate the game behind star playmaker Christine Nairn.

The Penn State faithful will be happy to hear that the weather conditions for San Diego on Friday are mostly cloudy with only 20 per cent chance of rain. The Nittany Lions battled through some awful weather in the Quarterfinal victory over Michigan.

If the game plays out on the field like it is setting up on paper, the midfield matchup between Nairn and Brynjarsdottir will be the key to the fixture.

Brynjarsdottir, the Icelandic National Teamer, has been the boss of the Florida State midfield all season. Standing at nearly six feet tall, she is an intimidating force on the field.

Nairn is no slouch though. The U.S. Women’s National Team midfielder is fully capable of taking over this game and dictating the play.

Prediction:  Penn State 2-1 Florida State. The Nittany Lions are happily at home in the perfect soccer weather of San Diego.

Preview: Will this be the time that Stanford finally beats North Carolina?

The all time season series for Stanford against North Carolina is 0-8-3 including the Tar Heels’ 1-0 win in the 2009 NCAA Championship.

Despite that lengthy winless streak, it still feels like Stanford is the favorite in this game. The defending national champion Cardinal entered the postseason as the top seed and has not faltered much along the way.

North Carolina is a bit of a surprise to reach this point with an upset victory over BYU on the road in the last round.

Yet, Anson Dorrance has been remarkably effective at this stage of the postseason with 20 National Championships from 25 College Cup appearances. UNC has never gone three season without winning a national title. This season is year three since the last one for the Tar Heels.

Two of the best coaches ever in college soccer face off in this meeting.

Both squads are full of youth national team and future full national team players, which is the perfect setup for a tactical battle.

Ratcliffe will want to take control of the game with his midfield and experience, but the dynamic athletes on North Carolina could punish Stanford on the break.