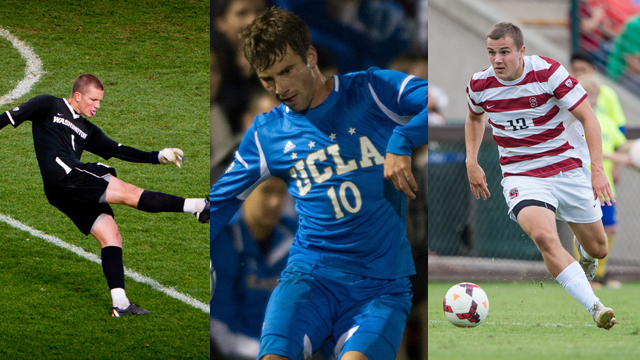 Try to contain your excitement, but the college soccer season is only two months away. In our ongoing preseason efforts, TDS has profiled the top ten players in each position over the last few months on the site.

As highly regarded as our opinion is, TDS turned the floor over to college coaches. Over the past two weeks, an anonymous five-question survey was sent out to dozens of Division I coaches. The questions: the best goalkeeper, defender, midfielder, forward, and player in college soccer.

The results provided a few surprises, but the overall winners became pretty clear after a few replies.

Despite losing most of the 2013 season to an injury, Washington goalkeeper Spencer Richey is still regarded as the best keeper in college soccer. The redshirt senior captured nearly 75 percent of the votes. Northwestern junior Tyler Miller, Maryland sophomore Zackary Steffen, and Marquette senior Charlie Lyon were the only other goalkeepers to earn multiple votes from the coaches. Despite a lackluster statistical season in 2013, coaches remained in awe of Miller and his quality in goal for the Wildcats. Steffen’s impressive freshman season was enough to earn the respect of a few coaches across the country.

Georgetown’s Thomas Gomez, Syracuse’s Alex Bono, and Army’s Winston Boldt all were mentioned as the best goalkeeper in college soccer as well.

Georgetown sophomore Joshua Yaro and UMBC senior Oumar Ballo were the only defenders to receive multiple votes from college coaches. Yaro was one of the many bright spots from last year’s impressive freshman class. The Right to Dream graduate stepped into the center back position for the Hoyas and immediately caught the eye of coaches across the country. Ballo earned the admiration of a few coaches after scoring two goals while starting all 20 games for the Retrievers last season. The center back headlined the UMBC defense that had a historic season with a 0.70 GAA and a 16-1-3 record.

North Carolina defenders Boyd Okwuonu and Jonathon Campbell each earned a vote from a coach. One coach saying that Campbell makes “everything look easy.” SIUE senior Matt Polster was also singled out as the best defender in college soccer. One coach said, “there are very few players in his position that have his combination of technique, passing range, athleticism, and game sense.”

Surprisingly, UCLA senior Leo Stolz was not the lone winner in this category as Virginia senior Eric Bird garnered the same amount of votes. Stolz, the 2013 MAC Hermann Trophy finalist, seemed like the obvious choice as he was one of the top players in college soccer last season. However, multiple coaches pointed to Bird’s performance at the 2013 College Cup as why they selected him as the best midfielder.

Notre Dame’s Patrick Hodan was the only other midfielder to be selected by multiple coaches. Hodan was given the moniker as the next great midfielder to come out of the Irish pipeline. One coach referred to Hodan as “elusive, technical, and smart.”

The votes were spread out over a few players in the forward position with Georgetown’s Brandon Allen, Delaware’s Guillermo Delgado, Connecticut’s Cyle Larin, Stanford’s Jordan Morris splitting the majority of the votes. Allen led the pack slightly as the Hoyas striker has high expectations on him with the departure of Stevie Neumann. Delgado, Larin, and Morris all enjoyed impressive freshman seasons last year. None of the coaches expected a sophomore slump from a member of the talented trio.

UCLA’s Leo Stolz slightly edged Stanford’s Jordan Morris for the honor of best player in college soccer. Stolz received one vote more than Morris out of over a dozen who were split between the two Pac-12 stars.

UMBC defender Oumar Ballo was the only other player to earn multiple votes from coaches.