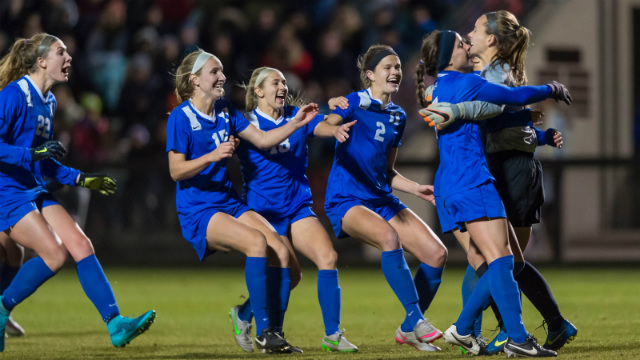 Turns out a local program will feature in the College Cup after all.

Duke topped Stanford 3-2 in a penalty shootout after 110 minutes of soccer yielded a 1-1 draw. Sophomore EJ Proctor made two saves during penalty kicks to secure progression for the Blue Devils, including the decisive save on Stanford goalkeeper Jane Campbell.

Toni Payne opened the scoring in the 14th minute for Duke, finishing off a rebound that fell into her path from a Casey Martinez effort. Stanford freshman star Michelle Xiao equalized in the 39th minute, and the Blue Devils absorbed pressure to force the decisive shootout.

For the fifth year in a row, the Seminoles are College Cup bound.

The ACC power produced a scintillating attacking performance, putting five past an undermanned Texas A&M side at home.

Once freshman Megan Connolly opened the scoring in the 19th minute, there was little about whether or not FSU would return to Cary. Michaela Hahn made it 2-0 in the 35th minute, the Seminoles pulled away after the break.

Cheyna Williams extended the lead to 3-0 six minutes into the second half, while a quick fire double by Elin Jensen in the 69th and 74th minutes rounded out the scoring.

Down 2-0 after the first two rounds of penalty kicks, it looked like Rutgers’ season was coming to an end in Charlottesville. But goalkeeper Casey Murphy gave the Scarlet Knights a lifeline when she saved Kristen McNabb’s third attempt, and in the fifth round, Virginia star Makenzy Doniak hit the crossbar when she had the chance to win it for Virginia.

Murphy rose to the occasion again in the ninth round, stopping Tina Iordanou’s attempt to officially book a spot in the College Cup with a 7-6 win on penalties.

Before the shootout, neither team managed to find the back of the net in 110 minutes of soccer. Virginia managed just two shots on goal the entire game, while Rutgers tested UVA goalkeeper Morgan Stearns four times prior to PKs.

Next up for the Scarlet Knights is a familiar foe.

Rounding out the College Cup field on Saturday is Big Ten champion Penn State. First half goals from Emily Ogle and Frannie Crouse did the trick against West Virginia, as the Nittany Lions secured a fourth straight shutout in the tournament to officially clinch a spot in Cary.