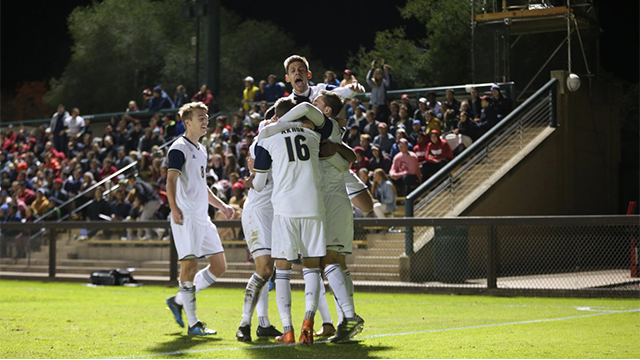 Stanford’s reign has come to an end.

It had all the makings of a classic college soccer knockout match. Marcel Zajac put Akron up by 2-0 at the halftime. First, he curled home an exquisite curling effort that kissed both posts on the way into the back of the net. Before the halftime whistle, he doubled the visitor’s lead thanks to an impressive combination play with teammate Ezana Kahsay.

The three-time defending champions weren’t going away quietly, of course. The Cardinal pulled a goal back in the 57th minute when Tanner Beason converted a penalty kick. A bit more than 10 minutes later, Stanford drew level when Zach Ryan bundled home the equalizer from a frenetic set piece sequence.

Akron would finally unlock the Stanford defense when Colin Biros headed home the winner. It came from a 34-pass sequence, and was setup by a cross from Marco Micaletto that Zajac headed into the path of Biros who clinched Akron’s third College Cup appearance in the last three years.

The ACC gets the bulk of the hype in men’s Division I soccer, but for the 2018 season, the Big Ten will have the last laugh.

Indiana, Maryland and Michigan State are set to join Akron in Santa Barbara this weekend, all picking up wins across 90 minutes.

The Hoosiers are likely to enter the College Cup as favorites, as their scintillating run continued at home turf. The highest seed left at No. 2, Indiana got a second half goal from Austin Panchot to secure a 1-0 victory against in-state rivals Notre Dame. Sophomore Trey Muse made a couple of crucial saves with the game tied at 0-0, and the win sets the stage for the third Indiana-Maryland matchup of the season.

Down in Lexington, the Terps continued to double-down on their defensive prowess, as center back Donovan Pines helped keep Kentucky’s JJ Williams bottled up for the bulk of their semifinal. When Amar Sejdic’s layoff found Sebastian Elney in just enough space to put the visitors up 1-0, it seemed like it might be enough – and it was, as Maryland returned to the College Cup for the first time since 2013.

For 70 minutes, it looked like James Madison’s remarkable run would carry them all the way to the Santa Barbara. Senior Ryan Sierakowski had other plans. The forward scored in the 71st minute and 81st minute respectively, canceling out a first-half strike from JMU’s Niclas Mohr. A Spartan win sets up a rematch of a regular season clash with the Zips, who won the earlier game by a 2-1 score in East Lansing.