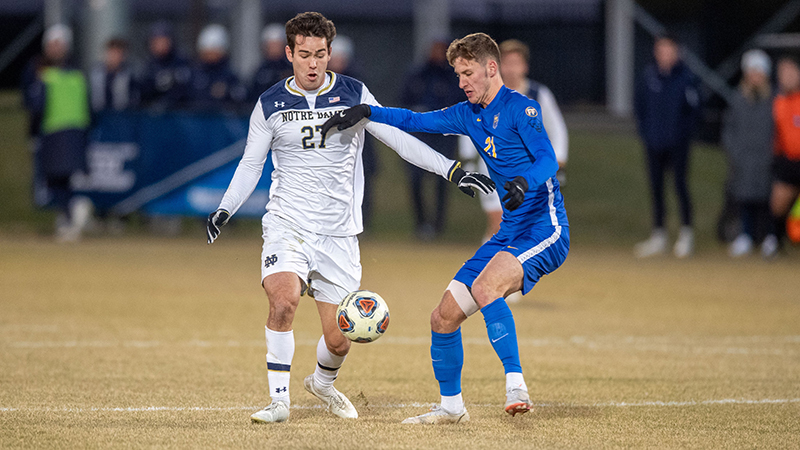 After several upsets in the first and second rounds of the men’s NCAA tournament, three of the top four seeds are off to the College Cup next weekend.

Washington, Georgetown, Notre Dame will travel to Cary next weekend to battle it out for the national championship. Seeded second through fourth by the committee, No. 8 seed Clemson joins them after a late equalizer and penalty kick shootout win at No. 1 Oregon State.

In Saturday’s opening match, an upset seemed plausible when West Virginia struck first against Georgetown. Yoran Popovic finished off an impressive team move, and given WVU’s track record in defending leads, the Hoyas were in trouble. But William Sands won a penalty in the 67th minute, which was converted by senior Dante Polvara.

After neither side could break the 1-1 deadlock, Giannis Nikopolidis delivered in the penalty shootout. He made two saves, and freshman Joe Buck converted the winning spot kick in a 4-1 win.

The second quarterfinal of the day produced an identical result: a 1-1 draw with the home team advancing on spot kicks.

This time it was Notre Dame besting ACC foes Pittsburgh. Guilherme Feitosa put the Panthers in front in the 41st minute. The lead wouldn’t last long, as Paddy Burns tied the game in the 67th minute.

Goalkeeper Bryan Dowd provided the heroics for the Irish, stopping penalties from Filip Mirkovic and Alexander Dexter, as Notre Dame converted all four of their chances to progress to Cary.

The Pac-12 supplies half of the College Cup field, and they were also winners in 90 minutes against Saint Louis.

A quick-fire brace from Raul Giovanni Miglietti was the difference for Washington, as the Huskies progressed to their first semifinal in program history. Miglietti scored two minutes apart, opening the scoring in the 24th minute off a Nicholas Scardina assist. He struck again after a great cross from Christian Soto. Goalkeeper Sam Fowler and the rest of the UW back line kept the SLU attack at bay and punched their ticket to North Carolina.

✔️ The Goal.
✔️ The Celebration with Husky Nation.

Up 2-0 at the half thanks to the masked man Raul Giovanni Miglietti!#GoHuskies pic.twitter.com/WqMXNnTjui

As they have so many times this season, Oregon State got a lead. This time, however, the Beavers came a few minutes short of a College Cup debut.

Sofiane Djeffal headed home the opening goal in the 30th minute from a corner kick, and for the next hour, it looked like it would be enough. Luis Felipe Fernandez-Salvador converted a late penalty for Clemson in the 85th minute. Oregon State had the potential winner called off for a foul, and the ACC side advanced by winning the shootout 4-3.