A quarterfinal victory in men's college soccer NCAA Tournament play keeps Sasho Cirovski’s Maryland Terrapins at the #1 spot in the TopDrawerSoccer.com Tournament 48 National Ranking this week, with Indiana, Georgetown and Creighton filling out this weekend’s field for the College Cup. 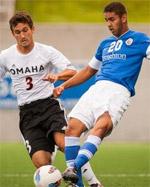 Meanwhile, Creighton freshman Christian Blandon is our TopDrawerSoccer.com Men’s College Soccer Player of the Week after his late goal lifted the Blue Jays to a 1-0 decision over Connecticut on Sunday. Recipients of the honor, along with the entire Team of the Week, are chosen after examining Division I match summaries each week.

D: Brendan Hines-Ike, Creighton – Freshman went 90 minutes in the back line as Creighton shut out UConn 1-0.