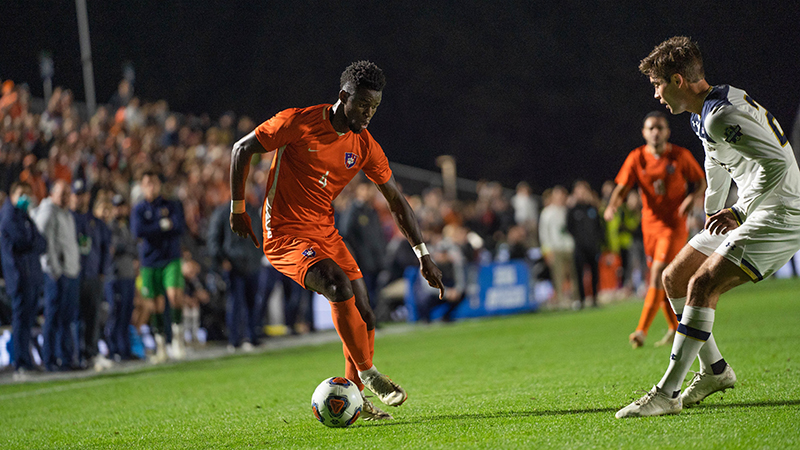 After both Clemson and Notre Dame reached the College Cup via penalty shootouts, it was only fitting that spot kicks would decide Friday’s first semifinal.

Clemson advanced to the national championship for the first time since 2015, winning 5-3 after battling to a 1-1 draw in 110 minutes. Luis Felipe Fernandez-Salvador and Jack Lynn exchanged goals in the first 20 minutes, the only two tallies of the game. George Marks was the hero for Clemson in the shootout, stopping Philip Quinton’s spot kick, and Justin Malou sealed their spot in Sunday’s final.

It was a quickfire start. Notre Dame nearly drew first blood four minutes into the match. Picking up possession on the right flank, midfielder Tyler Shea dribbled into space with the Clemson defense backing off. A Jack Lynn darting run toward the right side of the box distracted the defense, and Shea unleashed a shot that hit the crossbar and bounced clear.

Clemson’s first shot of the net resulted in a goal. Center back Hamady Diop played a wonderful, line-breaking ball that found Fernandez-Salvador between the lines. When no one closed him down, he danced around and fired in a shot off the underside of the crossbar and into the back of the net in the 11th minute.

The Irish didn’t trail for very long, however. Dawson McCartney got the ball in enough space, firing a shot that hit the post. Freshman Matthew Roou was alert to the rebound, taking a touch in the box and looking to beat Diop. When the Clemson defender made a play for the ball, Roou got past him and was taken down in the box. Jack Lynn made it a 1-1 game in the 21st minute, cooling slotting home past George Marks from the penalty spot.

Let's take a look back on how we got to OT.#MCollegeCup pic.twitter.com/OCt3bxiNt1

With parity restored at the half, both teams were relatively cautious as they pushed for the breakthrough. There were chances: Justin Malou had a shot from a wide angle saved easily by Notre Dame goalkeeper Bryan Dowd in the 47th minute. Lynn forced a turnover in the 67th minute when he stripped possession high up the field. He took on a trailing defender, firing a shot that was just wide of Marks’ post.

Dowd was pressed into action a couple more times just a few minutes later. The first was an easy header from substitute Mohamed Seye, before scooping up a tame shot from Callum Johnson.

A wild sequence in the 75th minute nearly saw the Irish take the lead. Paddy Burns curled in a shot from 20 yards out that took a deflection towards the Clemson goal. Marks was unable to settle the ball, allowing Lynn to dribble into the six-yard box. He went down in the penalty area, but Clemson cleared the danger and the ref waived away a penalty shout.

Marks came through in the first overtime on a pair of occasions to keep Clemson alive. First, he punched away a glancing header from Lynn off a long throw. A few minutes later, after McCartney slipped Kyle Genenbacher through one-on-one, he came off his line and made a kick save to keep it a 1-1 game.

Then, when it came to spot kicks, Marks made the crucial stop on Quinton, allowing Malou to punch Clemson's ticket to Sunday.

In a matchup between two coaches that know each other extremely well, a tight first half opened up as the Washington Huskies defeated Georgetown by a 2-1 score.

The goals came from Lucas Meek and a superb effort from Charlie Ostrem within three minutes of each other. As they did in quarterfinals against Saint Louis, a quickfire double did the job. Zach Riviere provided a late consolation, setting up a grandstand finish in the final 10 minutes.

"I'm just very proud of our guys," Washington head coach Jamie Clark told reporters after the match. "That's a really good Georgetown team. They were certainly good enough to move on today. We've been seizing moments lately. In soccer, if you take advantage of your moments, you're going to keep winning your games."

Shots in the first half were limited. A wayward William Sands header off a Chris Hegardt cross (that wasn’t anywhere close to goal) and a Dylan Teves chance the only two registered during the game’s first 30 minutes, with neither on target.

Each side had a clear plan, with Georgetown looking to possess the ball with Kieran Sargeant, Kenny Nielsen and Aidan Rocha deep, allowing Sands to push up into the attack. But Washington’s defense was immense in the full 90, as the center back pair of Ryan Sailor and Achille Robin hoovered up everything that came their way.

Riviere nearly put the Hoyas a goal up 35 minutes into the match. Running onto a long diagonal ball from the left side, Riviere chested the ball around Charlie Ostrem and beat an onrushing Sam Fowler to the ball. He guided his shot just wide of the far post.

A tough defensive team, Washington’s ability to limit danger around the box allowed them to pounce when the opportunities presented themselves. Meek, who had missed a large chunk of the season due to injury, was credited with the first goal in the 54th minute. Dancing on the ball just outside the penalty area, he played a quick pass into Teves in the penalty box. The forward fired it right back to Meek, who hit a one-time cross that was deflected in by Hoya defender Kenny Nielsen.

Three minutes later, a moment of magic from Ostrem extended the lead. Afforded just enough space at the top of the box, he shifted the ball from his left foot onto his right and curled a shot into the top corner past Giannis Nikopolidis.

With time but needing goals, the Hoyas were able to up the tempo and increases pressure on the UW back line. Fowler was forced to make a tough save on a curling effort from Marlon Tabora in the 70th minute.

Pressure paid off for Georgetown with 10 minutes to go, setting up a frenetic finish. Sargeant picked out a diagonal run from Riviere, who powered his header through Fowler and into the back of the net. It was the first time all season UW had conceded while up two goals.

The UW defense held firm and did enough, holding on for the 2-1 win -- though Riviere had a chance to equalize with three seconds left, but his volley was high.

“I’m incredibly proud of our performance, it was a really hard match and, being in the second semifinal, it was really hard to wait a full hour for kickoff and I think the guys handled that really well," Georgetown head coach Brian Wiese said after the game. "When you play a team like Washington, it can go a ton of different directions and I think we did a fantastic job limiting what they were trying to do for the first 45 minutes and to say that about an opponent like Washington is a real tribute. But the downside is that, until the goals pushed some urgency into our guys, we wanted possession but we played the game in the middle of the field and we needed to be in a more dangerous position.”