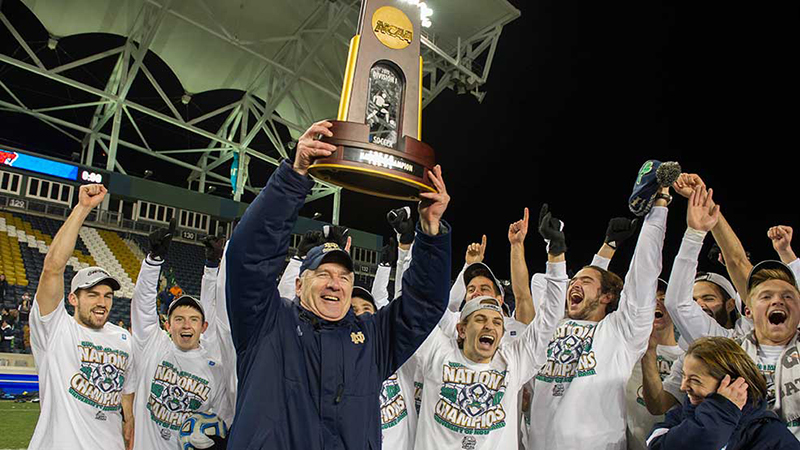 The legacy of one of the best men’s Division I college coaches of all time will be on full display this weekend at the 2021 College Cup.

Bobby Clark, who spent more than 30 years coaching at Dartmouth, Stanford and Notre Dame, has extremely close ties to this year’s field.

It starts at Washington, where his son Jamie leads the 17-1-2 Huskies to the program’s first College Cup appearance in school history. Born in Aberdeen, Scotland, during his father’s playing career, Jamie was an All-American at Stanford playing for his dad from 1996-98. He also spent time as an assistant at Notre Dame with Bobby from 2006-07, before embarking on a coaching career of his own at Harvard in 2008. With a stop at Creighton in between, he’s been at UW since 2011.

When Bobby Clark announced his retirement from Notre Dame with a career record of 216-93-55 in South Bend, Chad Riley was hired as his replacement. Riley played for Clark at Notre Dame from 2001-03, returning in 2006 as an assistant coach. After six seasons with the Irish, he moved to Dartmouth, first as an assistant, and then was the Bobby Clark Head Coach of Men’s Soccer at the Ivy League program from 2013 until he returned to South Bend.

Georgetown head coach Brian Wiese not only is part of the Bobby Clark coaching tree, he also coached Jamie and Riley at Stanford and Notre Dame. Wiese played for Clark at Dartmouth before graduating in 1995. He moved out to California and joined the Stanford staff in 1996, earning his Master’s Degree in Mechanical Engineering. After moving to Notre Dame in 2001, he took over the Georgetown men’s soccer program in 2006.

“Bobby is why all of us coach,” Wiese said ahead of this weekend’s College Cup. “I don’t think I’m out of bounds in saying that Chad Riley, Jamie Clark and I wouldn't be in the profession if we all didn’t play for him and coach with him along the way. He’s why I got excited about the profession as a young coach, as a 22-year-old grad out of college trying to figure out what I wanted to do. You talk about why you want to coach and having a mentor like him, I was lucky enough that he was really my only mentor as an assistant.”

While Mike Noonan, the head coach at Clemson, doesn’t have the same kind of direct ties as the other trio, he has plenty of familiarity with Clark. Along with being ACC foes from 2010, when Noonan was hired to take over the Tigers, he was the head coach at New Hampshire from 1991-1994, when Clark wasn’t too far away at Dartmouth.

Clemson’s foes in Friday’s first semifinal final are Notre Dame, making a third NCAA tournament appearance in Riley’s four seasons. Clark’s influence there is perhaps most easily felt, considering it was his last stop before retiring.

“It’s hard, when you spend so much time playing and working with someone, to know if there was anything you necessarily knew about the game before I worked with Bobby,” Riley said. “So really, it’s the foundation of everything that we try to do on the field, but then also maybe even more importantly off the field: it’s how to build the team culture, how to do it, because I do think he really set the standard in how he ran a program, especially at a place like Notre Dame.”

Ahead of the College Cup, the big push was to try and get Bobby out to Friday’s games. And, with his own son coaching against Wiese, who exactly he might be rooting for.

“It’s like a Shakespearean play, he’ll be torn every which way, there’s no clear winner, no clear loser,” Jamie Clark said. “I think the fact that either Brian or ourselves will get through and play in a final is special.”

Wiese, now in his 16th season at Georgetown has built the Hoyas into a national powerhouse. He’s heading to his second College Cup in three seasons with the program, looking for a second national championship in that stretch.

And while he obviously enjoys his current role, he fondly recalled the decade he spent as an assistant to Bobby at Stanford and Notre Dame.

“The assistant coaching stuff with Bobby was really the fun time,” Wiese said. “When you have someone that I consider to be the best in the field, and I would argue find me a coach in any sport that would be a better example of how you coach, how you handle people, how you teach, how you just go about preparation, I would like to meet whoever that person is because I just don’t see how anybody could have done that better than Bobby. To be able to base your foundation as a coach off of someone like Bobby Clark, I think it can’t be a coincidence the three of us are at a College Cup. The odds of that are happening are low without his influence being why three of us are in the College Cup.”

Friday’s matchup between Wiese and the younger Clark won’t be the first time the two have clashed at a critical stage of the season. The two programs squared off in 2019 in the NCAA quarterfinals, with the Hoyas winning 2-1 on the way to winning the program’s first national championship. Both the Huskies and the Hoyas are the only programs to make it to the quarterfinals in the past three tournaments.

On the other side of the bracket, Riley’s guided Notre Dame to a first College Cup since 2013, when the Irish won the lone national championship during Clark’s 17-year tenure. When speaking to the Athletic Director about potentially taking the program over, Riley felt that perhaps the most difficult part of the new gig was following in the footsteps of Clark.

But Riley said the foundation Clark left, and the familiarity he had as a former player and assistant coach obviously assuaged that. In the four seasons in South Bend, Notre Dame has a record 43-29-9, and Riley remains in contact with his old head coach.

“He's influenced me so much, all in a positive way, first as a player, then as an assistant coach and then transitioning as a head coach,” Riley said. “He’s been there with me every step of the way, whether it’s working daily with him, or being a mentor when I wasn’t working daily with him.”

The trio of coaches are obviously close even spread all around the country. During the COVID-19 lockdown, Wiese organized a group of coaches to jump on Zoom calls to chat about anything and everything soccer-related (and beyond). Both Clark and Riley were part of it, along with some of Wiese’s former assistants now in DI head coaching gigs of their own.

As the four teams chase a championship on Friday, it’s a reminder of the legacy that Clark leaves on the college game. With all the experience he picked up in Scotland, including time spent with legendary Manchester United manager Sir Alex Ferguson, Clark’s influence is a massive part of the College Cup in Cary this weekend.

And for his son, one of the biggest lessons he carries with him from his dad’s career is reflected by his friendships with Wiese and Riley: the relationships that college coaches can forge with their players helps them when they step between the lines, and can last far beyond the final whistle.

“The amount of people that want to be in my dad’s life is huge, and that’s what I want to be,” Jamie said. “I want to be a role model, a friend for many years to come. That’s my takeaway and I think that’s the biggest one: you treat players well, treat them right and very quickly, the coolest part is, they are playing harder for you, they’re more bought in, they’re closer-knit groups. That’s what spells a lot of our success.”