BOCA RATON, Florida — With two stout defenses clashing in Friday’s second semifinal between Florida State and Stanford, it was always going to come down to the little moments in the run of play that would separate the two sides.

And it was forward Cheyna Williams who stood up and delivered, not once, but twice. The forward scored a goal in each half to send Florida State to a second straight College Cup title game on the back of a 2-0 win, as Florida State continued its defensive dominance in the NCAA tournament. 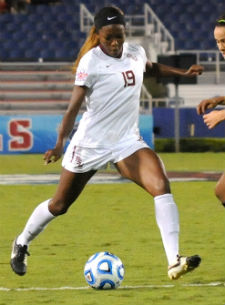 “Our kids came in battled hard, fought hard competed all over the field which we knew we needed to do in order to compete in this game,” Florida State head coach Mark Krikorian told reporters after the game. “We’re thrilled that we’re going to be able to play on Sunday and we’ll go from a very unfamiliar group in Stanford to a pretty familiar group in Virginia.”

Early pressure from the Seminoles nearly paid dividends in the sixth minute. Attacking midfielder Dagny Brynjarsdottir, so good in the air, found herself in space on a corner kick, only to have Cardinal defender Kendall Romine clear her goal-bound shot off the line.

Williams would open up the scoring in the 13th minute through a fantastic individual effort. Outside back Emma Kovisto found the feet of Williams near the top of the box, and she did the rest, curling a right-footed shot past Stanford goalkeeper Jane Campbell.

“Emma played a great ball to my feet, it’s one of the things we’ve worked on this year, finding my feet and letting me be able to turn,” Williams said. “She played a great ball in, I saw the defender kind of overcommitting to my left foot, so I took the cut and shot it.”

Two minutes later Jamia Fields nearly had a second for the Seminoles, when her long, loopy cross appeared to trouble Campbell, who punched the ball onto the crossbar.

One of Stanford’s best chances came in the 51st minute, when Chioma Ubogagu slipped behind the back line. FSU goalkeeper Cassie Miller came charging off her line, Ubogagu beat the ‘keeper, but defender Kirsten Crowley scrambled the goal-bound shot off the line.

“I knew Cassie had the front post covered and I knew that I didn’t have anyone to man mark in the box so I decided to back her up,” Crowley said. “The ball came to me, it could’ve come to anybody I feel like because we all want it so bad and the margin between winning and losing are special moments like that.”

The search for an equalizer continued for the Cardinal, as Ubogagu, Taylor Uhl and Lo’eau Labonta passed and probed for openings in the Florida State defense. But the Seminoles yielded little, with wide midfielders Jamie Fields and Carson Pickett tracking back to swarm and close down the Cardinal attackers.

Florida State’s high pressure forced the Cardinal to make uncharacteristic errors, and Brynjarsdottir almost turned a giveaway in the box into the second goal of the game, only to see Campbell make a smart save in the 52nd minute.

A late free kick chance for Stanford came in the 83rd minute. LaBonta’s curling effort beat the wall but was easy work for Miller to scoop up in front of the FSU goal.

In the end the Seminole back line proved impenetrable, harrying and harassing the Cardinal’s offense which failed to truly trouble Miller again. When Ubogagu or Uhl thought they had space Crowley or fellow center back Kristin Grubka were there to put out the fires in the penalty area.

“We’ve done a very good job throughout the course of the season at minimizing chances at our goal and I think that’s why we’ve been stingy giving up goals and opportunities at our net,” Krikorian said. “Make no mistake, those kids from Stanford they’re good. They’re really good, and it’s a credit to our kids for being as disciplined in the defending as they were and their persistence of working together and staying compact, following the script, I thought we were very good."

With Stanford chasing the game in the dying minutes, Williams put it out of reach in the 87th minute. It came from a simple Jamia Fields long ball over the Cardinal back line as they flooded forward. Williams raced onto it, rounded Campbell and slotted home to put the game out of reach.

“It’s been an amazing run this year,” Stanford head coach Paul Ratcliffe said. “We wanted more and the game I felt kind of slipped away from us. We had times where we started to get our rhythm but really didn’t play to what we are capable of.”