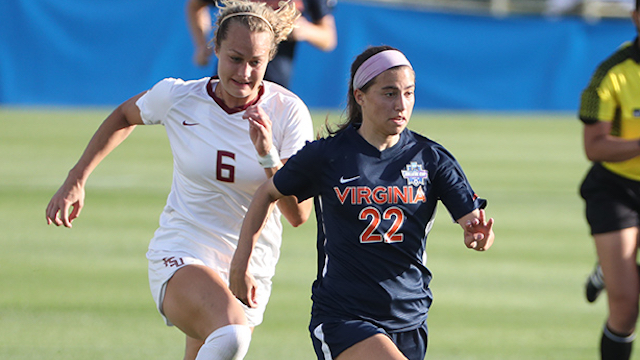 Florida State advanced to the 2020 NCAA Division I National Championship game after a penalty kick victory over Virginia in the first semifinal from the 2020 College Cup. The two ACC teams battled to a scoreless draw. Florida State prevailed 3-0 in the kicks from the spot. FSU goalkeeper Cristina Roque made two saves in the shootout. Gabby Carle scored the winning shot from the spot.

“Virginia gave us all we could handle,” Florida State head coach Mark Krikorian said in the postgame press conference. “We were fortunate to come into half at 0-0. I don’t think we started the game with the mentality that we normally do. I can assure you that we will be more ready to play from the start on Monday. Feels great to move on and compete for the National Championship.”

The all-ACC battle in the opening contest at the 2020 College Cup in Cary, North Carolina was a tight affair with the result on the balance over 110 minutes. Florida State (13-0-2), the No. 1 overall seed in the tournament, was held scoreless for the second game in a row. Virginia (14-4-3), the lone unseeded team left in the dance, gave Florida State all of the business in the first half, but the underdogs could not convert any of the six shots in the first half into a goal.

“They came out with a stronger mentality,” Roque said about the first half for Florida State. “We adjusted in the second half. The whole team played their hearts out. It was a team effort overall.”

Florida State was the better team in the second half. The Seminoles started to move the ball with purpose and dictated where the game was played for most of the half. Despite the dominance in positional play, Florida State had to wait until the 71st minute for their first shot on the goal. It was Yujie Zhao’s effort from the top of the box that Laurel Ivory easily secured. Florida State finished the game with only two shots on goal.

There were only five shots on goal combined over the 90 minutes. Virginia freshman midfielder Lia Godfrey was the most dangerous player in the attack. She had two strikes on goal including one early in the second half on an attempt in transition after she picked off a pass, but Cristina Roque stopped both efforts. Taryn Torres did well shutting down the Florida State attack and connecting passes forward to help with the quick transitional play for Virginia.

Torres also did well picking out Rebecca Jarrett on the left wing. Jarrett was unstoppable in the first half but Virginia could not convert those chances into goals. The underdogs came close through Jarrett with a strike early in the game but it hit off the bottom of the crossbar. Florida State focused on slowing Jarrett down in the second half and overtime with multiple players supporting the defensive efforts of Kirsten Pavlisko so she was not left on an island against the speedster.

The best chance during the overtime period came from Virginia striker Diana Ordonez on a header off a cross, but the attacker did not get enough power behind the effort and Roque handled the attempt. Virginia finished the game with nine shots, five on goal.

The veteran experience of Florida State prevailed in the shootout. Virginia’s Alexa Spaanstra hit the first shot over the bar. Clara Robbins converted her shot with expert precision. Florida State never looked back. Roque saved the next two shots. Florida State scored off the feet of Emily Madril and Carle to seal the win.

Santa Clara secured a return to the program’s first national championship since 2002 with an impressive 3-1 win against North Carolina in Thursday’s second semifinal.

Chances flowed early and often in the second game of the night, as the Broncos brought relentless energy in an effort to match UNC’s high press. Two early chances for the Tar Heels came in the first five minutes. Maycee Bell, who was making her way back from an injury this spring, glanced a header wide with Santa Clara goalkeeper Marlee Nicolos coming for the ball. A minute after that, Brianna Pinto was cut down just outside the box, but couldn’t beat the wall with her free kick.

Santa Clara’s starting front three of Izzy D’Aquila, Julie Doyle and Kelsey Turnbow caused problems after the quick Carolina flurry. North Carolina goalkeeper Claudia Dickey had to be alert on opportunities for Doyle, and she made an even better stop on Turnbow from a shot on the left side of the box.

It was the duo of D’Aquila and Turnbow that teamed up for the first goal of the game in the 20th minute -- though it did come with a touch of fortune. With Turnbow dribbling the ball into space, she tried to chip the ball through a pair of retreating defenders and into the path of Sally Menti. A UNC defender deflected it towards Dickey’s goal, and when defender Abby Allen failed to clear the ball, D’Aquila pounced on the chance and scored.

After a back-and-forth flurry to start the second half, Turnbow tested Dickey with a left-footed shot from outside the box that was easily smothered by the UNC shot-stopper.

Pinto would equalize in the 51st minute, when Samantha Meza threaded a pass through traffic that found her teammate just inside the penalty area. Pinto calmly slotted in the tying goal past Nicolos.

Thirty seconds later, the Broncos bounced back in front. A North Carolina defender slipped in her own box and D’Aquila pounced on the loose ball on the right side of the opposing penalty area. She took a quick shot that Dickey turned away. But Turnbow crashed the rebound, and was credited with the goal to put her side back in front, diving in as Talia DellaPeruta tried to clear that ball.

Skylar Smith extended the lead in the 60th minute. Turnbow received the ball at the top of the  UNC penalty area, and her initial pass attempt was blocked. She still managed to poke it through to Smith, who was in on goal. Dickey quickly came off the line to snuff out the attack, but could only deflect it back off Smith, who scored her side’s third goal of the game.

From there, Santa Clara shut things down. Flashing both a steely resolve at the back and the ability to control possession under pressure, they held UNC without a shot for 30 minutes after the Pinto goal.

The Tar Heels finally got a look at goal when Talia DellaPeruta fired in a long-distance shot with just four minutes left. Nicolos tipped it around the post, and the Broncos held on to advance to Monday’s national championship.

"I'm very proud of our group and the effort," Santa Clara head coach Jerry Smith said after the game. "You have to look at the spaces and find where you can put the ball. You've got to be able to have a little heart in what you're doing. It's how we do things and I thought there were parts of the game where we did that really well. And when you're playing a Tar Heel team, they're competitive. That's about as competitive a group as you're going to play against so you have to be prepared to get into some tussles. I thought our players handled that pretty well today. I'm really proud of my team."