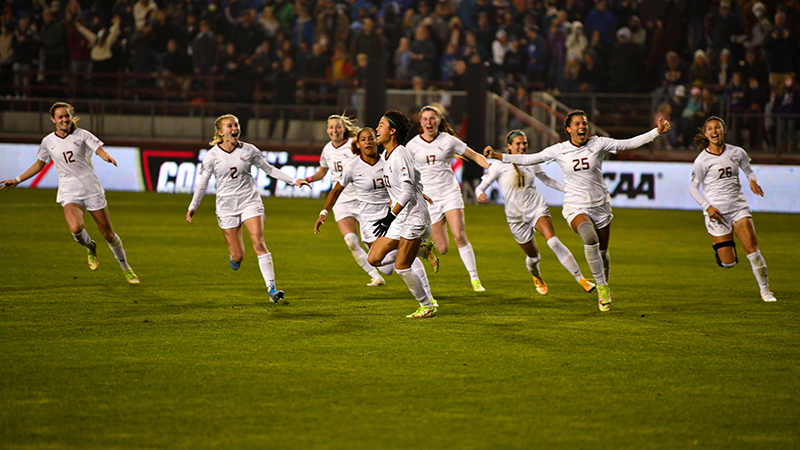 The 2021 edition proved to be no different.

Even in a clash featuring high-powered BYU attack, chances (and goals) were at a premium for the Cougars and Florida State.

Part of that can be attributed to Florida State’s tactical approach, as head coach Mark Krikorian tweaked his starting lineup, going with five defenders to halt the BYU offense. And then of course, both sides were leery of opening things up in a game with such high stakes.

In the end, it went to a penalty shootout at the end of 110 minutes without a goal. This time, Florida State put aside the disappointment of the spring season, beating BYU 4-3 to claim a third national championship in program history. Goalkeeper Cristina Roque saved two spot kicks, and Yujie Zhao converted the decisive penalty.

We are on top of the college soccer world!!! #OneTribe pic.twitter.com/js2Cp4go9A

FSU’s tactical approach was nearly thwarted well before the shootout – just nine minutes into the match. A quick combination play between Mikayla Colohan and Cameron Tucker, two teammates that know each other so well, almost put BYU in front. An offside flag denied Tucker an opener after Colohan had slipped her in behind the FSU back line.

Twenty-two minutes into the first half, Jaelin Howell slid in and contested Colohan for a loose ball. Howell got the ball and plenty of Colohan in the follow through of her tackle, picking up a yellow card. Colohan was carried off the field and missed the rest of the first half – though she did return and played the entire second half and overtime.

Both defenses were quite sharp. Lauren Flynn and Emily Madril were able to handle Tucker’s runs in behind, with plenty of support from Gabby Carle at left back. The BYU attack mostly resorted to shots from range. Grace Johnson hit a swerving effort that FSU goalkeeper Cristina Roque handled with relative ease in the 60th minute. The ACC side did well to slowdown and nullify the transition game for BYU, and when set in their defensive shape, the space was limited for Colohan and Tucker to try and pass through.

The quick combinations and attacking forays were likewise limited for FSU; Through the game’s first 80 minutes, the Seminoles mustered just a single shot on goal.

Jamie Shepherd had half a chance to stab home an opportunity in the 81st minute, though she was unable to test Florida State goalkeeper Cristina Roque.

In the final minute of regulation, Florida State nearly won it on a corner kick, with Smith deflecting an inswinger back into the mix, but the BYU back line was able to clear the chance.

Neither side managed to find the back of the net in either overtime, sending the game to penalties. That set the stage for the heroics from Roque and Zhao, as the Seminoles managed to get the better of their WCC opponents this time.