The men's College Cup in Philadelphia kicks off on Friday with some frigid temperatures in the forecast. The high at PPL Park on Friday is 34 degrees with snow in the forecast for Saturday. The icy temperatures, hopefully, will not take away too much from the two enticing games on the docket.

How they got here: New Mexico went on the road and defeated Washington 1-0 with a dominating performance. Notre Dame held on for a 2-1 win against those plucky Spartans from Michigan State. 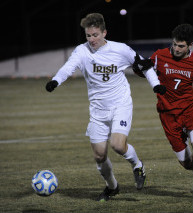 Players to watch: Notre Dame’s Harrison Shipp and New Mexico’s Kyle Venter are the players that the ESPN cameras will target, and they will likely be in the thick of things throughout the game. However, this game comes down to the battle between defensive midfielders. Notre Dame’s underrated, underappreciated Nick Besler has been pretty much everything for this team in the postseason. The junior is the piece that allows Notre Dame to attack with numbers and not worry about the counter attack. Besler will have a daunting challenge on Friday with New Mexico’s skillful midfield of Michael Calderon and Michael Kafari. Calderon plays the more advanced role with Kafari providing the cover. If Notre Dame takes control of the game early, Kafari will be the most important player to disrupting that rhythm before the Irish really get rolling.

Stat of the game: This is new territory for both teams. New Mexico has only reached this stage one before in 2005 when the Lobos won in the semifinals but lost in the finals to Maryland. Notre Dame is at College Cup for the first time in program history. The all-time series between the two programs is 1-1 with New Mexico winning the last meeting in 2009.

Pressing question: Will familiarity matter? Not with this stage of the event, but with the field and the stadium. Notre Dame lifted the Big East Tournament crown at PPL Park last year. This Irish squad features many of the same players, which should play into their favor.

How they got here: Virginia defeated Connecticut 2-1 in the Elite Eight. Maryland went on the road and knocked off California 2-1; thus setting up an All-ACC semifinal.

Players to watch: This is the third meeting of the season between the Terps and the Cavaliers. The two teams battled to a 3-3 draw during the regular season while Maryland beat Virginia 1-0 in the ACC Tournament final. The moral of the story is these teams know each other better than any one else. Maryland will trot out its normal personnel that likes to attack, attack, and attack. Virginia will role with the speedy wingers in hope of exposing the Maryland outside backs that tend to drift forward. The counter-attack will be Virginia’s friend in the evening clash. The main matchup to watch will be the Virginia defense against Patrick Mullins. The senior forward had two goals and an assist in the first meeting and then set up the own goal in the 1-0 winner in the ACC tournament. Can Virginia stop him this time?

Stat of the game: Maryland has made the College Cup eight times in the last 16 years. There is a strong argument to be made that Sasho Cirovski is one of the greatest coaches in college soccer history.

Pressing question: What will Virginia do with the defense? After losing Matt Brown to a red card early against Marquette, the Cavaliers added Zachary Carroll to the fold and he has done well in his place. Has he done enough to keep his spot on the field or will the coaching staff return to the lineup from the start of the Marquette game?