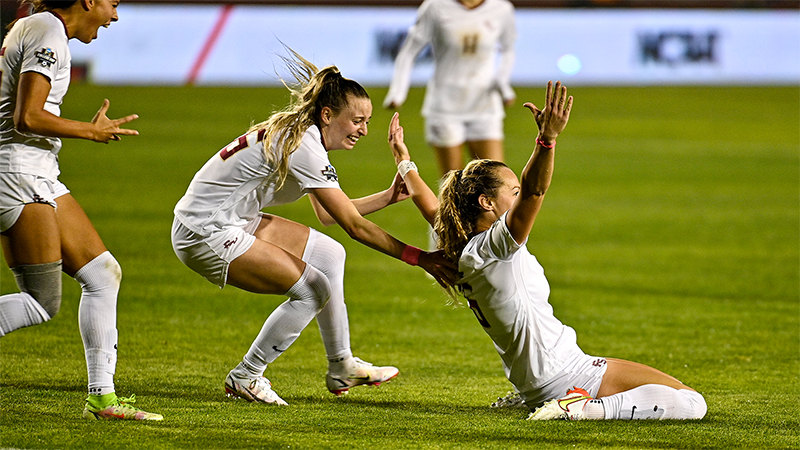 To little surprise, goals were hard to come by at the semifinals of the 2021 College Cup.

Florida State and BYU advanced to the national championship in narrow, nail-biting fashion, with one goal managed from 200 minutes of soccer in Santa Clara, California on Friday night.

Jaelin Howell’s 71st goal and a superb goalkeeping effort from Cristina Roque punched Florida State’s third ticket to a national championship in the past four years.

A 1-0 win over Rutgers required four crucial saves from Roque. That included a sensational double stop on shots from Allison Lowery and Frankie Tagliaferri in the 78th minute after the Seminoles had just taken the lead.

The lone goal of the first semifinal came from Howell, who scrambled home a corner kick in front of goal to provide the winning margin.

After missing the first two penalty kicks in the shootout, BYU rallied to advance to the national championship by a 3-2 margin.

Neither College Cup host Santa Clara nor BYU conceded an inch for the bulk of the second semifinal. Despite combining for more than twice as many shots as FSU and Rutgers managed in the first game, penalty kicks were required after 110 minutes of soccer with neither side able to find the breakthrough.

There were chances, however, as BYU looked to its high-powered attack to solve Santa Clara. But the two WCC foes know each other so well, and barely budge. Santa Clara nearly won it in in the final minute of regulation, when a Kelsey Turnbow cross from the left side was headed wide by Isabella D’Aquila.

Each side had a chance to win it in overtime. BYU had a chance when Kendell Petersen’s shot from 20 yards out was saved onto the crossbar by Kylie Foutch. The Broncos fashioned theirs two minutes into the second overtime, but D’Aquila’s goal-bound effort was headed clear by Laveni Vaka.

Santa Clara had the early advantage in the shootout when Mikayla Colohan had her attempt tipped onto the bar by Foutch. But BYU goalkeeper Cassidy Smith saved Turnbow’s effort, and the Cougars converted their final three attempts. Ellie Glenn’s attempt hit the post, securing BYU’s spot in Monday’s final.