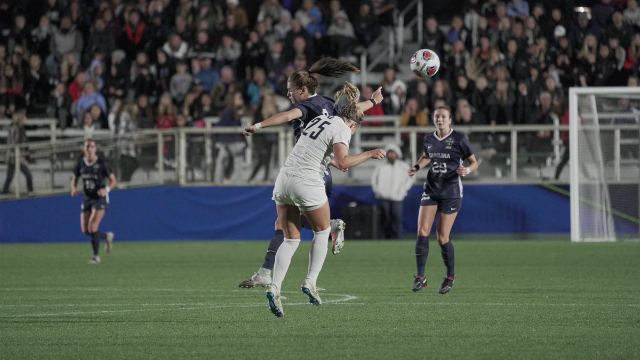 Coming into Friday, the North Carolina Tar Heels had played three College Cups at WakeMed Soccer Park without dropping a match in their regional backyard. It took nearly 108 minutes against the undefeated Georgetown Hoyas, but UNC extended that streak with a 1-0 win, thanks to a Julia Ashley goal deep into overtime, to advance to Sunday’s final.

“What I love about this group is that we have extraordinary leaders,” said Tar Heels manager Anson Dorrance. “I haven’t done anything. They’re their own leaders, they guide the team, and they’re passionate about what we’re trying to do this year.”

“Credit to Carolina—they found a way to win the game,” said Hoyas head coach Dave Nolan. “They showed a bit of poise in the right moment, at the end to get the goal.”

Kicking off under a cloudy, blustery twilight at Sahlen’s Stadium, the initial tailwind was with the Hoyas attacking the north goal. On cue, Georgetown sought to exploit space in behind North Carolina’s fullbacks, who pushed forward as part of the Tar Heels’ hybrid 4-3-3 formation.

However, UNC forward Alex Kimball got behind the Hoyas’ backline 20 minutes into the match, her run stymied by Georgetown’s all-American goalkeeper Arielle Schechtman. Afterwards, the Tar Heels controlled the bulk of pace and possession against a Georgetown defense that surrendered only nine goals in 24 matches this season, good for the seventh lowest goal-against average in NCAA Division 1.

With 23 minutes left in the opening 45, Kimbell got off an angled attempt she yanked wide left of frame. Three minutes later, Georgetown’s Grace Nguyen launched a shot that skimmed just over the crossbar. The Tar Heels went back to work, and with under two minutes left in the first half North Carolina substitute Rachael Dorwart accepted service in the box, pivoting to fire a left-footer that Schechtman smothered.

“In the first half, we didn’t play very well,” Dorrance said. “We’ve seen our team play at a much higher level. Our whole discussion at halftime was, can we play better? The response in the room was yes, we can.”

As the LED tower lighting began to illuminate the verdant surface, the scoreless back-and-forth continued throughout the second stanza. Business picked up in the 80th minute, when UNC’s Bridgette Andrzejewski slipped a through ball ahead to Julia Ashley. Instead of angling towards goal for a shot, Ashley opted to cross the ball into the goalmouth, a service that the Hoyas cleared out.

“I just guessed right,” said Gallagher. “I was in the right spot at the right time. It was a well-hit shot, but luckily I was there.”

“Schultz did a great job of drawing the PK,” Otto said. “I stepped up, and unfortunately the keeper made a great save. But after that happened, you have to tell yourself that my team has my back.”

Otto nearly redeemed herself in the final minute of the first OT period when she found an open attempt in the middle of the area. However, Otto flared her left-footer wide left of goal.

“Right before we went to the second overtime, I said to my team, ‘someone is going to finish this off in the next ten minutes,’” Ashley said.

North Carolina finally pried the lid off the goal with just over two minutes remaining in the second overtime. Off a run that began deep in Hoyas territory, Ashley charged across the midline before laying off to Brianna Pinto. Pinto played back to Ashley, who passed off to Dorwart, who centered the ball back to Ashley heading into the area. Ashley slotted her shot past Gallagher for the game-winner, sending the Tar Heels into Sunday’s Cup final and the capacity crowd into hysterics.

“I can’t say I planned that one,” Ashley sheepishly said. “Emily [Fox] won it on the left side, and from there I just started running up the field. I saw Pinto to my right, and I just planned to keep it going until we got close to the goal.”

An announced attendance of 10,439 filled the Sahlen’s Stadium grandstands, populated by a mix of partisans and participants in the NCFC Youth Girls College Showcase, which began today with hundreds of teams around the country competing. The crowd thinned just a bit for a more methodical nightcap featuring the ACC champion Florida State Seminoles and the Stanford Cardinal. Stanford, the defending national champions, came into Friday riding a 45-match undefeated run, the fifth longest in NCAA history and the longest by any school besides North Carolina.

Stanford’s date with destiny derailed, however, as Florida State rode a couple of first-half goals to a 2-0 victory over the Cardinal.

“It was a hard-fought game, and I think the crowd was treated to a heck of a game between two very good teams,” said Florida State head coach Mark Krikorian. “There were a lot of future national team players playing at a high level, and we’re thrilled we found a way to score a couple of goals and be able to advance.”

“It was a great performance by Florida State,” said Stanford head coach Paul Ratcliffe. “We had a tough night. I don’t think we played up to our potential or capabilities. But I give a lot of credit to Florida State—they dictated the tempo and played very well tonight.”

Stanford trailed for a total of under eight minutes all season, but that’s the position the Cardinal found themselves in just the 28th minute. Florida State defender Gabby Carle drove lateral across top of the box before slotting a sweeping shot past Stanford goalkeeper Alison Jahansouz.

“I started going inside and kept going until I realized I could score,” Carle said. “I thought it would be the hardest shot for the keeper, so I just swung my leg and it happened.”

A minute later, Stanford’s senior Michelle Xiao nearly equalized, but she pushed an open angled attempt wide right of the woodwork. Having dodged that bullet, Florida State doubled its advantage in the 42nd minute. Malia Berkely let loose a shot from 30 yards out bound directly for Jahansouz. However, the Cardinal keeper let the sphere slip through her mitts, a howler that made the scoreline 2-0 entering intermission.

“I was just hoping to not hit the crossbar for once,” Berkely said. “I saw the keeper off her line, and I thought if I could hit it just right it’d go in. And it did.”

Ratcliffe said that second goal was the one that “deflated” his squad.

“Then it’s hard when you’re down against a team that’s good in possession and keeping the ball,” Ratcliffe said. “They can just play keepaway a little bit, and I think that’s what ended up in the second half.”

That’s all the Sunshine Staters needed, as the second half became an paradigm of how to kill off a game. Meanwhile, the Cardinal offense, the third highest-scoring NCAA Division 1 team this season, showed a jarring inability to break down the Seminoles’ defensive scheme, which boasted the second-lowest goals-against average in D1. Stanford mustered just a single shot on goal for the match.

Ratcliffe summed up his team’s performance as “flat,” while he saluted Florida State’s ability to shut down his team’s attack and take the air out of the ball in the second half.

“I give credit to Florida State, that they closed down spaces quickly and didn’t give us much time to get good shots off,” Ratcliffe said. “That was the disappointing part of the game—if we would have gotten some shots on frame, we could have seen what would have come of it.”

“[Florida State’s] rotation out of the back and midfield was very dynamic,” said Stanford captain and first-team all-American Alana Cook. “We just weren’t able to settle into our game.”

Florida State’s victory avenges a loss to Stanford in the third round of last year’s NCAA Tournament.

“We knew coming into the game that Stanford is such a good team,” Krikorian said. “You don’t win 45 games in a row; it’s unheard of in the college game today with the parity. We knew that if we allowed them to completely control and dictate the tempo of the game it would be a long one for us. It was going to be very important for our kids to play brave.”

Sunday’s championship combatants share recent history in Cary. The Seminoles bested the Tar Heels 3-2 on November 4 at WakeMed Soccer Park to claim the ACC crown. In September, UNC defeated Florida State in Tallahassee in their only other meeting this season. On Sunday, the Tar Heels will vie for their 22nd NCAA title, while Florida State looks to become just the sixth school to win multiple Women’s College Cups.

“We know defending wins championships,” Carle said. “We try to bring it every game.”

“I just want this so much, and my whole team, too,” Ashley said about the prospect of winning a national championship. “I’m just trying to get us there.”