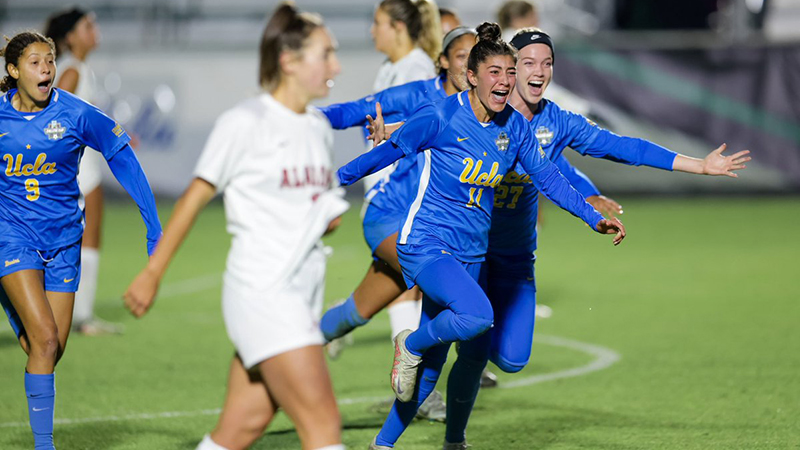 CARY, N.C. — The stage for the 2022 Women’s College Cup Final is set, with the North Carolina Tar Heels searching for their 22nd NCAA title and the UCLA Bruins, led by first-year head coach Margueritte Aozasa, looking to start a new era with a national title.

When senior defender Julia Dorsey, a two-sport athlete that has already captured a national title with UNC’s lacrosse team this year, headed home a cross from junior midfielder Emily Moxley to put UNC up 3-0 in 66th minute, it looked like the Heels were going to run away with their ticket to Monday’s final.

But Florida State wasn’t ready to roll over just yet. Senior forward Onyi Echegini and senior midfielder Heather Payne both scored to bring the Seminoles back within one, setting up a tense final 15 minutes of the night’s first semifinal.

Both sides had their chances to either put the game away or send it to overtime, but UNC managed to hold on. Redshirt freshman goalkeeper Emmie Allen rose up to claim an FSU cross in the dying seconds to seal UNC’s 27th trip to the College Cup final.

“We scored three magnificent goals against the run of play,” UNC head coach Anson Dorrance. “But that's the nature of our game and by our game I mean, the soccer game itself. So I want to credit a fabulous FSU team, because they certainly made it very difficult for us but I'm elated to be advancing and I'm looking forward to Monday.”

FSU senior midfielder Jenna Nighswonger said the team had the belief that they could complete the comeback.

“We had a good first half and we knew that yeah, we're down but we can come back and we did that against good teams like Notre Dame and UNC before,” Nighswonger said.

Friday’s semifinal was the third meeting of the season between the perennial ACC powerhouses, with UNC winning in the regular season and FSU claiming the ACC Championship title.

Following their loss in the ACC title game, the Heels made the decisions to change things tactically and switched to a 3-5-2. Dorrance credited associate head coach Damon Nahas for coming up with the game plan and assistant coach Nathan Thackeray for the work he has done with the defense.

FSU had the majority of the chances in the first half, forcing Allen into five first-half saves, but the Tar Heels pounced on an under-hit clearance to take a 1-0 lead into the break.

Freshman forward Madeline Dahlien put in a low cross, which FSU senior defender Heather Payne attempted to clear. Aleigh Gambone was in the right place at the right time, with the clearance falling right to the senior forward at the edge of the six.

FSU junior goalkeeper Cristina Roque didn’t have a chance on it, with Gambone firing home from close range.

UNC came out of the half as the aggressor, looking to bury FSU early and put the game to bed. The Heels managed to do that in the 59th minute, when redshirt freshman forward Ally Sentnor’s shot was handballed by FSU freshman defender Heather Gilchrist in the box.

Former NC Courage Academy player Tori Hansen stepped up to the spot, with the senior defender leveling her eighth goal of the season into the roof of the net at her youth club’s home stadium.

Five of Hansen’s eight goals have come from the spot, with the veteran defender scoring each time she has stepped up to the spot this season.

While the Heels came away with the victory, FSU dominated the stat sheet with 25 shots to UNC’s 14 and 13 corners to UNC’s three.

Allen said UNC’s top priority heading into the game was defending corners, hoping to avoid a repeat of the ACC title game.

“When we were preparing for this game and doing video and our walk through, that was our main focus because we feel like we could have tied or gone into overtime in the ACC Championship if that didn't happen, so we made sure that was not going to happen tonight,” Allen said.

For Dorrance, there’s no pressure heading into the final.

“We're playing with house money,” Dorrance said. “We've lost two of the best players in the country and we're in the national championship final. Are you kidding me? Maycee Bell has the potential to play for the US full national team and so, in my opinion, does Samantha Meza and so I'm just excited that we've progressed this far.”

UCLA dominated Alabama 3-0 in the second semifinal of the night, with the Bruins ending the Crimson Tide’s stellar season.

“I couldn't couldn't be more proud of our team,” Aozasa. “I felt like that was a statement win that we've been kind of waiting on and we knew that we were capable of that but it was really nice to see it in action and every single player that played today executed and did exactly what we needed them to do.”

Coming into the College Cup, Alabama was the odd one out. While the Crimson Tide were in the midst of a historic and excellent season, making their first appearance in the College Cup and fifth tournament appearance overall, they were up against the giants of women’s college soccer.

UCLA has the third-most College Cup appearances in the competition’s history, with the only two teams with more making up the other half of the bracket.

Alabama graduate goalkeeper McKinley Crone was called upon early and often, making six saves in the first half. Crone ended the game with eight saves.

The best of Crone’s efforts was a stunning double save in the eighth minute, where she denied UCLA sophomore forward Lexi Wright with a diving save before recovering in time to deny the sophomore again with a foot save.

“I just want to say my Mac has been so good all year and the confidence that we have as a team with her and goal is so high,” Alabama graduate forward Riley Mattingly Parker said. “She's such a class player.”

The Crimson Tide seemingly took the lead in the 27th minute, but Parker’s diving header was ruled out by the linesman's flag.

The Bruins finally broke through at the half hour mark, with junior forward Reilyn Turner tapping home an endline cut back from sophomore defender Quincy McMahon.

Back-to-back goals from McMahon and senior defender Madelyn Desiano barely two minutes apart sealed the game in the second half.

Desiano’s strike was particularly excellent, with the senior’s left-footed effort from the top of the box finding the top corner. After the game, Desiano ranked it No. 1 for her career goals.

Alabama head coach Wes Hart credited UCLA’s ability to break his team’s press as one of the ways UCLA was able to come away with the victory.

He added that other talented teams Alabama played this year, naming Duke, BYU and South Carolina specifically, weren’t able to break the press in the same way UCLA was.

McMahon said that UCLA’s back line worked on breaking the press a lot heading into the game.

“The back line we just worked a lot, especially just in practice and everything, about what that press was going to look like and kind of how to handle it,” McMahon said. “I think the biggest thing for us was a mentality piece of just staying calm, knowing that we can play out of good pressure and then also just having the frontline there to support us.”

Alabama had its chances to score, recording seven shots on goal to UCLA’s 11, but couldn’t find the back of the net.

While the loss certainly stings, Hart and his players aren’t willing to let that take away from the historic season for the program.

“Unfortunately it wasn't our night,” Hart said. “But I do not want this to take away from what we've done this year and what an incredible season. Nobody, nobody, nobody except for these players and as well as the other 27 players in our locker room and our coaches, nobody believed in us before the season started. We weren't picked in any preseason polls. Nobody gave us any love, any attention and I hope we made believers out of a lot of people. I mean, you know the amount of records that we broke this season. Never having won an SEC championship and we won our first SEC championship this year. Zero All-Americans in the history of the program. Now we have three. We smashed almost every record we had and I know this one stings and I hope with time we’ll be able to kind of forget about this game and appreciate everything that we've done this year.”