College players to watch in the 2016 WPSL 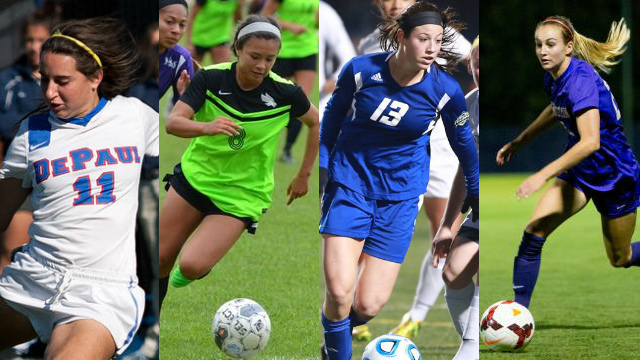 Along with the newly started UWS league, the Women’s Premier Soccer League is another option for college players to stay sharp.

There are scores of players, from Division I through the NAIA ranks that will compete for various WPSL sides this summer. Below is a look at 15 players to watch as the new college season inches closer.

Since joining DePaul in 2014, Ben has hit the ground running, emerging as one of the best offensive talents in the Big East. The Illinois native will stick close to home for the summer to turn out for the Chicago Red Stars Reserves as she looks to make an early impression on a pro staff.

If not for a freak injury suffered in 2014, Meehan would have already exhausted her eligibility and likely be patrolling the pitch on a pro side somewhere. Instead, she is the spearhead of a Boston College team looking to make inroads in the ACC this year. She’s listed on the roster for one of the three Boston Breakers sides in the WPSL (Academy, College and Reserve teams) where she’ll look to replicate her prolific scoring rate. She’s tallied 46 goals in three seasons at BC so far.

Given the likely departures for Penn State’s back line this fall, Basinger is going to be a critical figure as the Nittany Lions seeks a second straight NCAA title. The former U.S. U17 and U20 youth international, Basinger has enjoyed an effective college career in three seasons so far, and will see plenty of time at the back for the Washington Spirit Reserves.

A member of the Conference USA All-Freshman Team last fall, Torres hit the ground running as a consistent reserve player on the underrated Mean Green. Torres scored three goals and added four assists in her first collegiate season, and she’ll be back in her hometown for the summer to compete for FC Dallas’ WPSL team.

The vaunted recruit has played well in defense for the Golden Bears, logging over 1,900 minutes in the Pac-12 in 2015. She’ll be a key figure for FC Pacific, an Irvine-based team that has a rich roster of DI talent at its disposal. Look for Gibson to be a key cog for Pacific’s defense this summer.

Forced to sit out the 2015 college season because of a transfer to Florida, Seiler will be available for the Gators and form a dangerous tandem with Savannah Jordan in the attacking third. This summer will be critical as she plays her way into game shape and is ready to hit the ground running in the SEC.

A lethal and athletic striker whose abilities suit the college game perfectly, Baucom is back close to home playing for Phoenix Del Sol. She enters the WPSL season fresh off a breakout season, scoring 15 goals in 22 games for LSU. Expect to see her give defenders plenty of problems in the summer season ahead.

The TDS Freshman Player of the Year is listed on the Sounders Women roster along with teammates Natalia Kuikka, Cassie Miller and Kaycie Tillman. As talented of a trio from the college ranks, their chemistry should be an asset in the Pacific Northwest, as Connolly prepares to excel in her second season in the college ranks.

One of the premier attackers in the country will suit up for Penn Fusion’s WPSL side, looking to continue to do what she does best: score goals. While her totals aren’t out of this world, Hill’s reached double digits in her three previous college seasons, scoring 45 times in 66 games. She’ll lead the line on a Fusion team stacked with promising young local talent.

The back-to-back Division II player of the year boasts impressive credentials, as she led Grand Valley State to a NCAA Tournament title on the back of 25 goals and 17 assists. Earlier this year, the 20-year-old earned a call-up to the U.S. U23 WNT camp. This summer is a chance for her to prove that she’s more than capable of competing against Division I talent, and showcase herself for a look at the professional level after wrapping up her career this fall.

While Westendorf has yet to play in the regular season, she began her college career at South Bend as an earl enrollee in the spring. The prodigious striker at club level is also a member of the Brazilian U20 national team that is slated to play this fall in Papua New Guinea. This summer with the Chill will be the first indication of how effective she can be at a higher level after scoring 27 goals in 16 games for GSA’s U18 ECNL team.

No matter what team she is on, Andrews is capable of producing must-see moments in the attacking third. Her move to USC worked out very well on the field in 2015, as she scored 12 goals and added four assists in her first season in Southern California. Slated to stay in California in the summer, Andrews is likely to be the centerpiece of SoCal FC’s offense.

The former Beach FC stalwart is back at her home club for the WPSL campaign, as Keever is one of a handful of So Cal standouts ready to turn up during the summer. Keever is a quality player for the Huskies that found the back of the net six times for Washington in 2015, good for second on the team. The rising junior should pose a significant offensive threat for Beach FC when they kick off play this weekend.

Similar to Westendorf, Ziemer is an early enrollee for the spring, competing for the Cavaliers during the exhibition season. The target forward is back in her native California, and if she can stay sharp this summer it bodes well for her chances to get minutes in her first year in Charlottesville as the Cavaliers search for a Makenzy Doniak replacement.

Like other NWSL teams, the Spirit has a pair of teams listed in the WPSL ranks. Chandler is the backstop of the Academy side that features a number of the younger college-age players. The likely starter at the World Cup for the U.S. U20 could see her miss the upcoming college season, though there’s no doubt that the Spirit Academy side will be in good hands this summer.