College Players to Watch in the PDL: Pt. 1 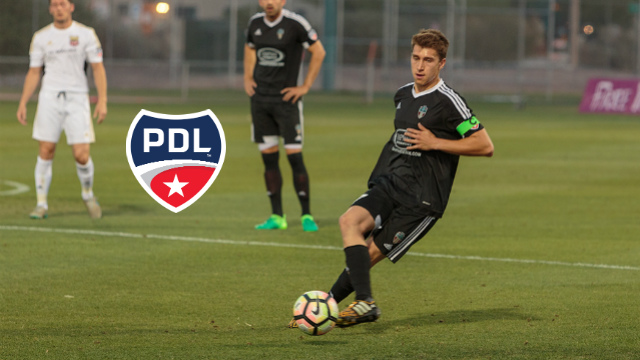 This week, topdrawersoccer.com will look at 10 college players to watch from each conference ahead of the start of a new season.

Below are 10 Division I players from the Western Conference to know this season.

Haji leads a contingent of VCU players setting up shop in the Rose City for the summer. The dynamic, game-breaking winger didn’t even land Atlantic 10 honors after transferring ahead of last fall should be one of the best players in college soccer this fall.

The Arizona native is back in Tucson once again, after an impressive junior year leading the line for Louisville. He scored nine times in 2017, and can boost his pro stock during both the PDL season and his senior campaign.

Earning the starting role as a freshman last fall, the shot-stopper from Netherlands logged more than 1,400 minutes. He’ll head to Southern California for a stint with Orange County, competing for the starting role.

In two seasons at Central Arkansas, Brodacki’s compiled an impressive goal tally of 29 from 36 DI games. That’s not guarantee of high-level potential, but his trip to the Pacific Northwest should prove to be the sort of test that helps gauge the quality the Swede brings to the field.

Both Ortiz and Portland teammate Benji Michel should provide plenty of offense along with Haji down in Salem. Ortiz, a creative midfielder that can set up scoring chances from wide spaces or in the middle, should be bring that same kind of impact to Portland’s PDL side this summer.

After a scintillating start to the 2017 season at IU, Dorsey hit a bit of a wall. He still puts in tremendous work on the defensive side of the ball, and if he can use a summer with the Rapids U23s to really hone his finishing, he could be in for a big 2018 campaign later this year.

The Big West Defender of the Year in 2017, Boateng’s a 6-foot-2 central defender with plenty of ability on the ball. He’s a cornerstone piece for the Glens, a long-existing Bay Area club side that is joining the PDL for the 2018 campaign.

After spending 2017 with Vancouver Whitecaps FC 2 in the USL, Amanda joins Oregon State this year, competing with the team this past spring season. He’ll bring goal-scoring punch to the Pac-12 side, but his first step into the spotlight comes this summer, as he’s rostered by Lane United a team based in Eugene, Oregon.

Coming off a poor season from UCLA’s perspective, Powell was one of the bright spots for the team at the back. The California native won’t be too far from campus over the next few months, competing for FC Golden State’s PDL side.

The Florida native is making the cross-country journey to suit up for Seattle’s U23s this season, where he’ll get plenty of exposure to MLS clubs. After finishing 2017 with 15 goals for FIU, Patino can continue that torrid scoring stretch both this summer and heading into the fall.