The college soccer season for men’s Division I teams kicks off on Friday. There’s plenty to look out for, including eight games between teams in the TopDrawerSoccer.com Top 25.

Below is a breakdown of the games and players to watch:

The Hoosiers open up their title defense on Friday with a clash against SMU, which could be a tricky challenge with Alfred Koroma now playing for the Mustangs. On paper though, UCLA looks like the real test for the eight-starred generals of the Midwest. 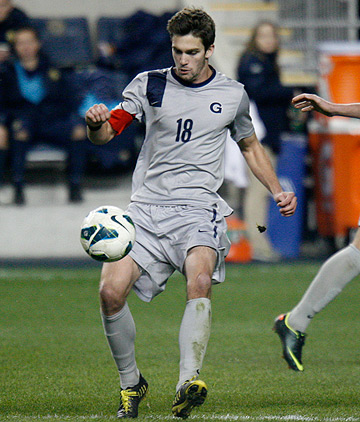 The Bruins are talented, experienced, and hungry for road wins, which would look nice in the RPI, the standard used for postseason seeding. UCLA will need its depth as well this weekend with a game against Notre Dame on Friday.

Both teams are trotting out new players that are eager to show their quality. Hoosiers have junior transfer Dylan Mares and freshmen Billy McConnell and Tommy Thompson all eager to make their mark with the storied program.

UCLA, not to be outdone, plans to showcase transfers Aaron Simmons and Jordan Vale, as well as freshman Kevin De La Torre.

The new faces are good supplements to the returners who have enjoyed quality careers at both programs. Trophy holders Nikita Kotlov and A.J. Corrado are well worth a Sunday viewing for the college plan. UCLA’s bevy of quality in the defense with Joe Sofia, Javan Torre, and defensive midfielder Leo Stolz are players to keep an eye on as well as striker Reed Williams.

To cap it all off, Indiana is attempting to set an attendance record with the clash thanks to some clever marketing behind the #FilltheBill campaign. It’s going to be a quality showcase of the college game both on and off the field.

NSCAAtv.com Game of the Week

The appeal of the Florida showdown is the quality of play.

Florida Gulf Coast’s coaching staff has quietly built a program worth the national attention. Head coach Bob Butehorn tends to look for players with flair, and it leads to a roster with players from Mexico, Guatemala, Colombia, and Brazil. FC Dallas should tune in to take a peak at Homegrown hopeful Aaron Guillen, who will start at center back for the Eagles.

USF continues to be a proving ground for future MLS talent. Two new faces with the Bulls look to be cut from that cloth with eyes on a big collegiate season this fall. Freshman Lindo Mfeka enrolled early to get a jump on the competition and he has already made his way into the starting lineup for the two preseason games. Fellow new piece Kennedy Adablah has also made his way into the starting lineup during the exhibition tilts.

The two teams played twice last season with USF winning the first meeting 3-0 during the regular season, and then battling to a scoreless draw in the NCAA Tournament before the Bulls prevailed in penalty kicks.

Will the Eagles get revenge this time around?

Two senior midfielders with professional aspirations square off on opening day when the Gauchos travel to Illinois to take on the Wildcats.

Chris Ritter has already established his prestige as an MLS-level player after reportedly turning down an MLS Homegrown contract in the offseason. His goals for this season, and in the past, have been team-based. But the Chicago Fire will be keeping close tabs on the player’s individual success this fall.

Winning this individual battle will help set the tone for the game, and likely get Northwestern off on a winning foot.

Baiden is also thinking about a professional contract in his near future. If he follows the MLS route, his path will go through the 2014 MLS SuperDraft, which means every game at this stage matters.

The defensive midfielder from Ghana is known for his range, strong tackles, and quick distribution. If he continues to prove that against top-level competition, MLS scouts will move him up the draft board.