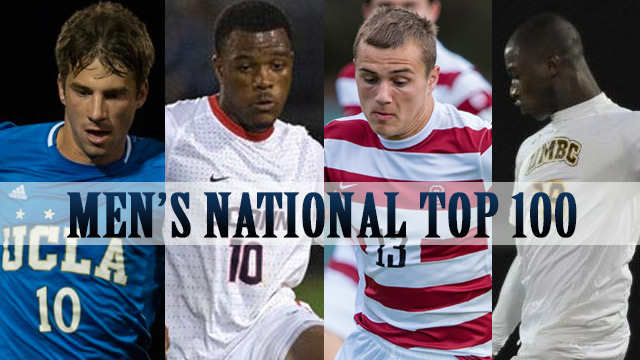 UCLA leads the way in both quantity and quality. The Bruins placed five players in the top 100 including number one overall player Leo Stolz. The senior midfielder turned down interest from MLS after a stellar junior season to see out his career in Westwood. Michael Amick, Aaron Simmons, Earl Edwards, and new transfer Larry Ndjock join Stolz on the top 100 list.

Fellow Pac-12 star Jordan Morris checks in at the second spot. The Cardinal sophomore quickly grew into his role with Stanford during his freshman season where he finished with six goals and seven assists. The expectations for Morris are much higher in his second campaign as many college coaches are pointing to him as the best player in college soccer. Morris is one of three Cardinal players on the top 100 list. Junior defender Brandon Vincent and senior forward Zach Batteer are the other two players in the top 100.

UMBC senior center back Oumar Ballo is no. 3 on the list. Ballo has been a stud of the UMBC defense for the past two seasons, which includes 42 starts in a row. Ballo was the America East Defender of the Year last season.

After scoring 14 goals in his debut season, Connecticut sophomore Cyle Larin comes in at the fourth spot. The Canada Men’s National Team forward is the headline act of a Huskies attack this fall that also features top 100 players Adria Beso Marco.

Rounding out the top five is Washington midfielder Cristian Roldan. The 2013 Pac-12 Freshman of the Year is back in Husky purple despite interest from MLS. Roldan will be the creative force for the Jamie Clark’s side this season. He will have plenty of help too with Darwin Jones, James Moberg, and Spencer Richey all back and taking up spots in the top 100.