After a disappointing regular season, Indiana needed to put together a Big Ten tournament run in order to get a spot in the NCAA tournament.

The Hoosiers did just that over the last week, culminating on Sunday thanks a game-winning goal from Jamie Vollmer in the tournament final, defeating Michigan State 1-0 and making it to the big dance. 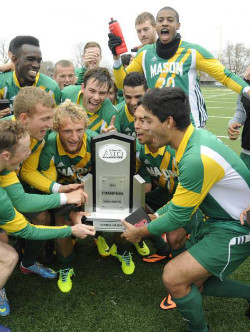 “I am really proud of the team on how they performed throughout the entire Big Ten Tournament knowing what we needed to accomplish,” head coach Todd Yeagley said after the game. “With the stakes so high they performed at their best when the stage was the greatest. We are happy to have an opportunity to bring the Big Ten Championship home to Bloomington.”

Along with Vollmer’s heroics, the shutout capped off a tremendous week for goalkeeper Colin Webb. The freshmen ‘keeper, who took over the starting role late in the season, made six saves in the victory.

A furious rally from Providence came up just short, as Marquette won the Big East tournament title with a 3-2 victory over the Friars.

“We’re ecstatic about winning the tournament, getting the automatic bid,” Marquette head coach Louis Bennett said after the game. “I’m really happy for our senior class and all our classes below that. I thought our body of work this season was very good, but sometimes you don’t always get rewarded for that but we did today. I’m so proud of the effort.”

For much of the day, it looked as though Marquette would coast to the conference crown. Goals from Sebastian Jansson and Nick Parianos saw them take a 2-0 lead into the half. In the 59th minute, Adam Lysak extended the advantage to three with a nice finish at the top of the box.

The Friars ensured a nervy finish, however. Phil Tower pulled one back in the 67th minute, finishing into the upper corner to make it a 3-1 game. Freshman Julian Gressel put a scare into the Golden Eagles when he pounced a saved shot in the 87th minute, but the higher seed held on to clinch the title.

“[It was] obviously a disappointment not to win in the final,” Providence head coach Craig Stewart said. “Couldn’t ask for more from the guys in the effort they gave, especially in the second half there. 2-0 at halftime was a tough enough mountain to climb and then to go 3-0 down and still show that character and spirit to give ourselves a chance at the end of the game.”

Mullins turned a defender, rounded the corner and forced an own goal off Virginia defender Kevin McBride in the 88th minute, as the Terps picked up a second straight ACC tourney title with a 1-0 win.

“I’m so proud of our team,” Terps head coach Sasho Cirovski said after the game. “I thought we stood strong, we were very disciplined, we looked to try to play and create chances but knew it was going to be few and far between in this game and it was going to take a moment of brilliance by an individual to create. And the best individual in the land found the will and the skill to create something and we won.”

Chances were scarce throughout, as the two sides adopted a conservative approach while battling through the fatigue of playing three games in the last five days. Cavaliers goalkeeper Calle Brown played big role in limiting Maryland’s opportunities, as the 6-good-5 netminder snagged cross after cross out of the air before it found the head of a Terps attacker.

At the other end, the Maryland back line, much maligned earlier on in the season, did its part, as the Terps notched a third straight shutout. And with the score locked at 0-0 late in the game and overtime looming, Mullins came through and did his part to engineer the win.

For Cirovski, the defensive accomplishments of the past week didn’t go unnoticed.

“I don’t know if I’ve ever gone through the ACC tournament with three clean sheets when you consider that we’ve got two freshmen center backs, a freshman goalkeeper who have grown up,” he said. “The key has been the work of the players in front of them, from the forwards to the midfielders. We’ve been much more connected as a group and it has shown.”

Business as usual for the Akron Zips in MAC play.

The Zips rolled past Western Michigan on home turf, scoring two goals in each half to win the conference crown by a 4-1 score line. Forward Zac Portillos led the way with two goals and an assist, as the Zips fired in 10 shots on target on the day.

Senior forward Reinaldo Brenes also scored a goal and had an assist as Akron made one last case to get a top 16 seed in the tournament.

Senior midfielder Alex Herrera scored the only goal of the game in the 82nd minute as George Mason topped Saint Louis. Herrera converted a PK with under 10 minutes to go, also claiming Atlantic 10 Tournament Most Outstanding Player award for the weekend.

“We are all tremendously proud of the team's effort over this weekend," George Mason head coach Greg Andrulis said in a release. "We played some terrific soccer and had to play at our best to defeat a very well prepared and coached team in St. Louis.”

In what has been as successful season for the Patriots, the squad claimed its first conference tournament since winning the CAA back in 2008, and also won the Atlantic 10 tourney during its first year in the conference after moving ahead of the 2013 campaign. The victory also erases any doubt of their NCAA tournament status.