Tatiana Ariza captured a lot of the headlines in the Ohio Valley Conference (OVC) with her 12 goals and eight assists in 19 games on way to winning the OVC Offensive Player of the Year – a first for Austin Peay. But, UT Martin really dominated the competition in the conference. 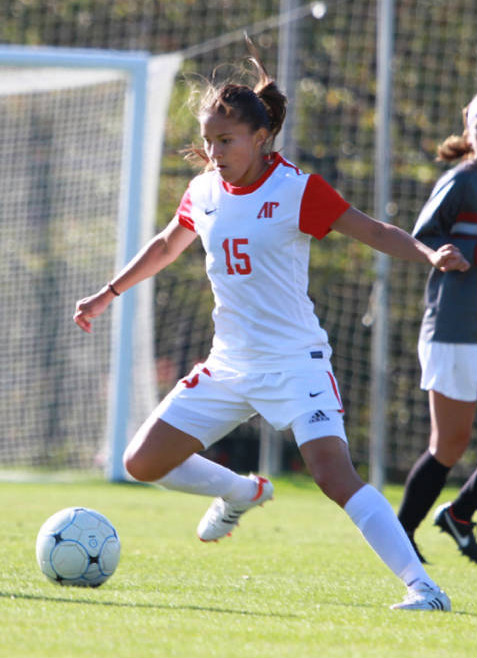 The Tennessee program rolled to an eight-win year in conference play and an NCAA Tournament berth with the conference tournament title in hand. Skyhawk soccer came up just short of topping Kentucky in the first round as an overtime goal sent the OVC champs to the offseason despite a standout performance from goalkeeper Mariah Klenke in the outing.

Phil McNamara’s squad will be looking to make it three-straight trips to the NCAA Tournament in 2013. UT Martin brings back eight starters and 16 players overall including Klenke and OVC Freshman of the Year Saphyra Coombs-James.

Ariza and Austin Peay appear to be the biggest challengers to the Skyhawk dynasty. The Colombian striker already holds the record for points, goals, and assists in Lady Gov program history, but those would all take a back seat to leading the squad to an OVC Championship in her final season.

Eastern Kentucky is another program to watch this fall, as first year head coach Melissa Barnes has nine of the starters back from last year’s squad. Barnes led UNCW and Furman to NCAA Tournament trips as an assistant coach in the past.

The top three finishers from the Sun Belt all left the conference, so the door is as open as it will ever be for one program to take over the role as the bully of the Belt. WKU seems like the most likely candidate to fill the void, as the Hilltoppers finished fourth in the conference last season.

Graham Winkworth took over the South Alabama program in November after 10 seasons with North Alabama. Arkansas Little Rock also decided to go in a new direction as the administation hired Adrian Blewitt in December. Blewitt’s most recent success came with Lenoir-Rhyne where he had a 36-5-3 record over the past two seasons.

Among the returning programs, Arkansas State is one to watch, as the Red Wolves displayed a dynamic attack in 2012, which ranked in the top 35 in the nation for scoring offense. ASU also returns Lindsay Johansen who became the first ASU player to appear in a national team camp (Canada U20) in March.

People tend to whisper when speaking about Rachel Tejada over a respectful fear she will appear and score a soul-crushing goal if someone mentions her name too loudly.

The MVC Player of the Year has been the bright star of the conference since her arrival in 2011. The striker has 39 goals and 19 assists in two seasons, and it does not look like she will be slowing down anytime soon either.

Yet, despite Tejada’s dominance, Evansville claimed the conference title in the regular season with a 4-1-1 record. The superbly named Purple Aces return eight starters from last season’s team MVC Goalkeeper of the Year Simone Busby and MVC Freshman of the Year Abby Springer. There are also 14 freshmen headed to Indiana to join Krista McKendree’s squad.

There is also a new program in the conference this fall, as the MVC welcomed (with open arms) Loyola to the fold in the offseason. Loyola was not entirely convincing last season in the Horizon League with a 2-3-2 record from conference play. Perhaps, the change of scenery will help jump start the attack that only managed 13 goals in 2012.