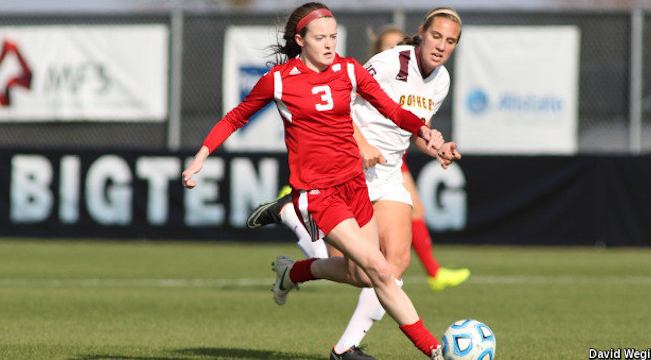 The Nittany Lions roll into the 2015 season with a talented midfielder and a genius on the sideline. Costa Rica hero Raquel Rodriguez is back for her final go after winning nearly every award last season. Rodriguez is not alone on the team. Freshman of the Year Emily Ogle is back for her sophomore campaign and likely to boss around the center of the field in the Big Ten. To top it off, head coach Erica Walsh enters her ninth season and has three Big Ten Coach of the Year trophies on the mantle at home. It’s not a bad time to be a Nittany Lion.

The Badgers’ Rose Lavelle is one of the best players in college soccer. The craftiness and brilliance to her game has helped push Wisconsin into the upper echelon of national programs. It’s not all rosy in Madison though. The Badgers have to replace Big Ten Goalkeeper of the Year Genevieve Richard along with standout forward Cara Walls. A 10-player recruiting class is expected to fill the voids that were left behind.

The Wolverines enter 2015 with a pep in the step and a grin on the face. The California-heavy senior class has the Michigan program firmly in the hunt to contend for a Big Ten crown in 2015. Keeping the offense ticking is forward Nicky Waldeck who scored 12 goals in 2014. For the defense, Megan Hinz is one to watch. The sophomore goalkeeper made 57 saves in 2014 with a 0.85 goals against average.

Casey Murphy has had a pretty spectacular past year. The Rutgers sophomore took over the starting job as a freshman, which led to a spot on the U.S. U20 Women’s National Team. Murphy has been tremendous with the youth national team. Goalkeeper’s form comes down to confidence and she is definitely playing with swagger now. Murphy’s quality in net is boosted by a talented defense, which includes Brianne Reed.

Iowa graduated 10 seniors from last year’s squad, which means plenty of change from the squad that finished tied for fifth in the Big Ten. Part of that big graduating class was Cloe Lacasse, who led the team in goals and points in 2014. Bri Toelle is the top returning scorer for the Hawkeyes after putting in three goals and adding five assists last season. In net, there is a bit more experience back with Hannah Clark back for her senior campaign. Clark was third in the Big Ten in goals against average.

Minnesota enters its fourth season under head coach Stefanie Golan. The program is full of excitement and promise. Could this be the year that potential is reached? The Gophers reloaded the squad with five players from local club Minnesota Thunder. The continuity could build the bridge to a successful pipeline for the program.

Jannelle Flaws has been one of the most dominant forces in college soccer during her time with the Illini. This fall will be her last run at it at the collegiate level after she was granted a sixth year of eligibility. Flaws was the first Illini to win Big Ten Forward of the Year in consecutive years. Her career stats have her just four goals away from tying the program record for goals scored. Her firepower up top give all of the other teams in the conference reason to worry when Illinois is next on the schedule.

The Wildcats brought in a strong recruiting class for 2015 in hopes of climbing into the top half of the Big Ten this fall. Northwestern did not score nearly enough to contend with the top teams in the conference last fall with only 23 goals from 21 games. The Wildcats do return their leading scorer for last year’s team in Addison Steiner.

Like Northwestern, Maryland struggled in front of the goal in 2014. The Terps were shutout nine times last season, which includes ending the campaign with an over 300 minute scoreless streak. This fall is a new page in head coach Jonathan Morgan’s legacy in College Park and a big chance to fix that attack. Morgan brought in another strong recruiting class, which should provide some spark to the attack. Like other programs, if the Terps can stay healthy, they could climb the standings this fall.

The beautiful new Hibner Stadium is the star of 2015 for Nebraska soccer. The Huskers opened up the stunning complex on August 12 and are hoping it can be the trick to punching back to the top of the conference. On the field, U.S. U23 WNT forward Jaycie Johnson is the name to know on the roster. Johnson has 28 goals in two seasons with Nebraska.

The Buckeyes return eight starters from last year’s youthful squad with hopes of improving on the 13-point performance. Ohio State brings back defender Nicole Miyashiro who had five assists last season. Ohio State’s problem in 2014 was keeping the other team off the scoresheet. The season started well with a 1-0 win over Duke, but the Buckeyes only managed one other shutout through 18 games.

The pressing issue for the Spartans is in the goal. Courtney Clem graduated and there is no clear favorite to take over in that position. The competition for the spot could lead to positive results though. The Spartans do return seven starters from last year’s team including leading scorer Jamie Cheslik, who found the net eight times as a freshman in 2014.

The Hoosiers had a rough go of it in 2014 with some streaky stretches throughout the campaign. IU ended the year with back-to-back wins, which could serve as a building block for this fall. The Hoosiers return leading goal scorer Jessie Bujouves, who is one of five seniors on the roster.

Purdue enters a new era this year with Drew Roff assuming the head coaching position in December. Roff led the Illinois State program to new highs in the Missouri Valley Conference. Roff has eight starters back from last year’s team.