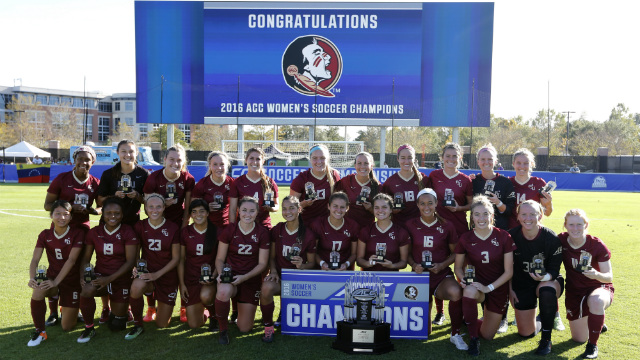 The dust settled on DI women’s postseason conference tournaments on Sunday, as champions were crowned in finals around the country, as automatic bids were secured.

Below is a recap of a handful of conference finals, along with the complete list of automatic entrants into the NCAA Tournament.

It’s never a shock to see Florida State get the job done in a shootout.

Tied 0-0 with North Carolina after 110 minutes of action, Cassie Miller saved a penalty kick in the shootout, and Bridgette Andrzejewski missed her final effort as FSU secured a fourth straight ACC tournament title.

Neither side threw numbers forward with great abandoned, as Florida State edged the Tar Heels in shots 8-7. Goalkeeper Lindsey Harris made four saves for UNC, while Miller turned aside three shots, as neither side managed to break the deadlock in Charleston.

The game of the day took place out in Kansas, as West Virginia erased a 2-0 deficit, defeating TCU in overtime to capture the Big 12 Conference crown.

TCU jumped out to an early lead, as Michelle Prokof opened the scoring just four minutes into the match. The Horned Frogs doubled the advantaged right before the halftime break thanks to junior Allison Ganter.

The Mountaineers were not to be denied, however. Michaela Abam cut into the lead in the 59th minute, and Kadeisha Buchanan broke TCU’s hearts by tying the game with less than two minutes left.

Hosting the Big East tournament turned out to be just what Georgetown needed to finally claim a tourney title, defeating Marquette 2-0 on the Hilltop.

The Hoyas put in a dominant performance over the 90 minutes, as goals from Grace Damaska and Rachel Corboz ensured a relatively comfortable victory in the end. Marquette was outshot 16-1, while Georgetown equaled its program record by recording win number 16 of the season.

Just when it looked like Rutgers was back in it, Minnesota answered the call.

After the Golden Gophers nursed a 1-0 lead from the 27th minute onwards, Rutgers’ Chantelle Swaby equalized in the 84th minute.

Instead of letting their heads drop, Minnesota answered right away. Emily Heslin scored less than a minute later, providing the winning margin as Minnesota held on for the 1-0 victory and Big Ten tourney crown.

Highlights! See the exciting finish in the @GopherSoccer Championship win over Rutgers. https://t.co/ROoRm7Jvnv

Savannah Jordan and Alexandra Fischer exchanged goals in either half, as the Gators and Razorbacks finished the 90 minutes tied at a goal apiece.

.@BrookeSharp11 heads in the golden goal & the #Gators celebration begins!

See the golden moment here with this clip from @GatorVisionTV pic.twitter.com/mkGZBHjSZ9