Connecticut takes over No. 1 in Top 25 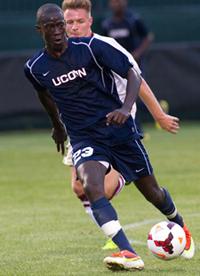 The opening weekend of men’s college soccer was not kind to the top three ranked teams. Indiana, the No. 1 side, dropped a 0-1 overtime result to visiting UCLA on Sunday. Maryland, the No. 2 ranked team, opened the season with a draw against Stanford on Friday and then suffered a 3-2 overtime defeat to California on Sunday.

Georgetown, the third ranked team, also lost to California, but saved some face from the weekend with a 2-0 victory against Stanford on Sunday.

With the losses to start the season, the top three completely changed with Connecticut taking over the top spot. New Mexico and UCLA moved up the other openings in the top three.

The Huskies defeated St. Francis Brooklyn on the opening night 1-0 to climb up from fifth spot to the No. 1. The challenge will only get more difficult for Ray Reid’s side with games against Washington and Syracuse coming up in the next three weeks.

New Mexico rolled past Villanova 7-2 on Friday in the home opener for the Lobos. IT was the dominant performance that many expected from the Lobos to start the season.

The aforementioned Bruins played to a scoreless draw against No. 9 Notre Dame to open the season, and then upset Indiana on Sunday thanks to a goal from senior Victor Chavez in overtime.

North Carolina and Indiana round out the top five.

California makes the biggest climb in the rankings. After being unranked in the preseason top 25, the Golden Bears climb all the way to No. 12 thanks to the previously mentioned wins over Georgetown and Maryland.

The Gauchos of UC Santa Barbara also climb into the top 25 following road wins over Northwestern and UIC. The Big West program used three goals from Frenchman Goffin Boyoko to race out to the perfect start. Gauchos were without the services of Fifi Baiden in both games, but expect him back in time for the big clash against UCLA in two weeks.

Check out the full top 25 here.