WASHINGTON — Coming away with a point on its first Big East road trip, a 0-0 draw against Georgetown on Saturday, the Creighton men's soccer program know that so far, things are going well in the 2013 season.

This despite late notice that their conference schedule for this season would be a much bigger challenge. 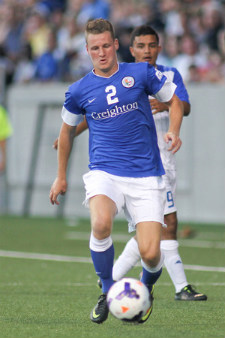 "We did well given the circumstances and still had a couple of opportunities to win the game, so I’m pretty happy with where we are right now," head coach Elmar Bolowich told TopDrawerSoccer.com after Saturday's tie.

Alerted to their new conference home for the 2013 season only in early spring, Bolowich had already lined up a tough schedule for the current season to offset the tame Missouri Valley Conference. After the shuffling settled, Creighton found itself up against soccer powers like the Hoyas, Marquette, St. John's, Xavier to name a few, while out of conference games such as Old Dominion, Tulsa, Michigan and Michigan State remained on the slate.

"We’re playing one top 20 team after another," Bolowich said. "And so my fear was the wear and tear, not getting enough breaks and the amount of travel we have to do. We have to just suck it up, right now we’re sitting in a pretty good position with only having given up one game, and being 5-1-2 against a real, real tough schedule. So hopefully it’s going to continue."

Against a dangerous Georgetown side, the Bluejays coped well with the two-pronged offensive threat of Brandon Allen and Steve Neumann, keeping a clean sheet through 110 minutes of action. They managed to fashion chances of their own thanks to Fabian Herbers and Timo Pitter, though never forced any spectacular saves from Georgetown 'keeper Tomas Gomez.

Neumann, who obviously saw Creighton at least year's College Cup, was certainly pleased with the caliber of opposition and quality of play.

"They’re a great team and it’s fun to play against teams that actually like to play soccer instead of just booting it long," he said. "They came into our place and possessed the ball well, we had our stretches of possession, they had their stretches of possession. I think overall it was just a good college soccer game. Creighton’s definitely a great addition to the Big East and hopefully we play them again down the road."

Like his star striker, Hoya head coach Brian Wiese had good things to say about the Bluejays and hopes that last weekend's meeting was the first of two in 2013.

"We’re looking forward to hopefully playing [Creighton] again this year," he said. "I’d love to play them in PPL Park and have it be a great showcase for the league, I think it would be."

While the start to the season is obviously a positive, the Omaha-based crew obviously faces the most difficult travel slate of the teams in the new Big East. Along with non-conference road games against Saint Louis (this Wednesday) and Michigan, the bulk of the conference schedule remains. That includes visits to Marquette, Butler, Seton Hall and Providence, none that appear easy on paper.

Despite the odds, a top-two regular season finish is the target for Bolowich.

"The way the conference is shaped up, it’s only four teams go to the semifinals in Philadelphia out of ten," he said. "So only the first two get a bye. If you find yourself in three and four, you play at home against five and six. But if you find yourself in fifth and sixth place, you play away, and then that following Friday, you have to fly to Philadelphia. And for us being the western most team, that is, again, a ton more travel. So we want to finish in the top of the conference."

Given the nature of the demanding schedule, Bolowich and his coaching staff has tried to be creative to make sure the players don't get worn down by the combination of travel and numerous games against high-level opponents. The team has tailored training sessions to try and scale things back in the hopes of cutting down on injuries and wear and tear.

And as far as the old conference stomping grounds are concerned, the jury is still out for Bolowich on whether or not the conference is a better place to be for his program when looking at postseason implications.

"I think conference-wise we are better than the Missouri Valley," he said. "It may be harder to get an automatic bid at the end of the year by winning your conference championships because you are probably facing a St. John's or a Georgetown, and you have those teams. So you have to do your homework with the body of the season, what you do in the regular season. You can’t count on the conference tournament. That’s what we always did at North Carolina, we never depended on the conference tournament in the ACC because it was too hard to win. So we just had to make sure we did our homework in September and October leading up to it, and I think that’s what we have to do here too."