Since dropping the opening game of the season – a 3-0 loss to Maryland in a match delayed for an hour and a half because of lightning strikes – Navy women’s soccer have rattled off nine straight wins, the longest streak in Division 1 soccer.

Despite the hot start, Navy isn’t getting carried away with a current 9-1-0 overall record.

“Things are going pretty well,” head coach Carin Gabarra told TopDrawerSoccer.com. “Our team continues to do some things a little better as we continue to get more and more games. We’ve gotten some good results that we’re happy to have gotten but I don’t think we’re at the point where we think we’re doing really well in all areas.” 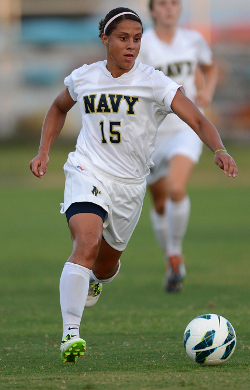 That temperament aside, Navy has looked dangerous in the final third especially, scoring 31 goals in that ten game stretch, conceding 13 at the other end of the field. Forwards Ashlynn Soellner and Morgan Dankanich are currently tied for the team lead with six goals apiece, while Paloma Perez has four. The team’s 3.10 goals per game average ranks sixth overall in Division 1.

“We’re attacking really well,” Dankanich told TopDrawerSoccer.com. “We’ve had a lot of goals this season because our offense and our midfield are connecting…we’re playing our own game really, we’re not switching our game because of the team we’re playing.”

Early success is not getting to the team’s head. Only two of the first ten games of the season have been played on the road, which was a weekend trip to Florida where the Midshipmen defeated Jacksonville and North Florida – not exactly powerhouse opposition.

That said, Navy has handled the teams in front of them, disposing of George Mason, James Madison and Towson during the winning streak. Gabarra hasn’t been taken by complete surprise with the opening stretch.

“We’re young, but we’re not inexperienced, we had 13 freshmen last year and we got a lot of those back,” she said. “So they’re young, but they had a lot of minutes last year. We spent a lot of time working on our shape and our team possession and team defending, a little bit of teaching in the preseason and a lot of that’s come together.”

Enthusiasm is tempered as well, with Patriot League play right around the corner. This coming weekend, Navy will look to extend its winning streak in two final non-conference games, facing Boise State and Howard.

After those two matches, Patriot League action begins on September 28 when Navy takes on American at home. According to Gabarra, it’s going to take a lot more from her side to see them through the upcoming stretch of the season.

“The intensity is pushed up a bit, the games are a lot closer, the opponents know each other more, which makes it even harder to get good results,” she said.

She has a firm idea of what improvement is needed, fortunately, as a three-game stretch on the road against Colgate, Army and Holy Cross will be crucial down the final stretch of the season.

“We need to continue to generate the kind of attacks we’ve been generating,” Gabarra said. “Our percentage of shots we’re taking is very high. We’re getting goals and getting them from all over. It’s not just our starters, it’s players who come in and make a difference.

“Everybody’s got a role and everyone has to step up and be at their best. Our team defending has to be good because we rely on each other, it’s our forte how well we defend as a team, and it’s the first thing we need to get through their minds, that all 11 of you are defending and we need to do it well, it’s our pride and our passion. All those things have to come together.”