The field of 32 will be whittled down to just eight teams over the weekend, as the NCAA Division I women’s tournament jumps into the second round.

It will be a whirlwind three days, however, as third round action will take place on Sunday, as careers and seasons will come to end for 24 teams in total. 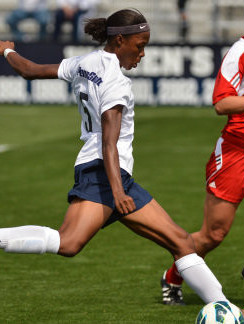 Here’s a look at the top action ahead in the second round.

Top Five Games to Watch in the Second Round:

Quantifying the Cardinal’s season is difficult. It has to be a disappointment not to win the Pac-12, especially to have it taken away at the hands of UCLA, a possible third round matchup for the winner of this game. But Stanford does have talent: Chioma Ubogagu, Taylor Uhl, Courtney Verloo all represent attacking options have been up and down this season. The Cardinal relies heavily on its outstanding freshman class at the back, with defenders Maddie Bauer and Stephanie Amack playing in front of first-year keeper Jane Campbell. The Gamecocks will provide a difficult test, fresh off a 5-0 pummeling of Furman. Offense isn’t even South Carolina’s strength as the squad has been notoriously stingy at the back, thanks heavily to the performance of Sabrina D'Angelo in goal. Daniella Au and Chelsea Drennan will look to replicate the team’s offensive prowess against a Cardinal team looking to stay alive.

The non-stop debate over the ACC’s superiority will be put to the test in this game, as the Big Ten’s best meets a BC side that was amongst the final programs to receive an at-large bid. The Huskers have plenty of potential to trouble Boston College’s back line. Freshman speedster Jaycie Johnson exploded for four goals last weekend, and she is showing no signs of slowing down. It’s far from a one-woman show, with Jordan Jackson and Mayme Conroy supplementing Johnson, while Ari Romero anchors the team’s back line. Romero’s primary focus in slowing the Eagles down will be sophomore striker McKenzie Meehan and senior attacker Stephanie McCaffrey. The duo has accounted for 29 of BC’s 39 goals on the season, so shutting out those two would go a long way towards another Huskers victory.

Another Big Ten-ACC second round matchup pits two programs that didn’t quite punch as high as they are capable of this season. Penn State, still a contender of stringing together a run to the College Cup, can bank on scoring goals, even against a solid Demon Deacon defense. Forward Maya Hayes is sure to be out to ensure that this isn't her final weekend of college action, as the U.S. youth international standout has enjoyed a stellar career at this level. She'll look to combine and break down the Demon Deacon defense, backstopped by the ever stready Aubrey Bledsoe. Wake, which has lost All American forward Katie Stengel for the year, wasn't exactly in menacing form against Morehead State, and if no one steps into the offensive void alongside midfielder Riley Ridgik, it could spell the end of their season.

It’s a bit curious to see the Blue Devils hosting this corner of the bracket, as Florida elected not to make a bid to host this round of games. Duke’s talent level is still high, but a barrage of injuries has led to a down year in the ACC. Would they have enough to see off the visit of the Gators? Florida saw Havana Saloun go down injured in the SEC tournament final – losing on of their best players won’t help their chances. Freshman forward Savannah Jordan will need to come up big while going up against Duke center back Natasha Anasi, who has helped marshal a steady defense. Scoring goals has been the challenge for Duke at times, but if Kelly Cobb, Kim DeCesare or Mollie Pathman can step up on Friday, the season could continue marching on in Durham.

The former Big 12 rivals line up in the second round in what could be a high-scoring matchup. Forward Janine Beckie leads the line for the Red Raiders, and she’ll be tested by A&M center back Meghan Streight. The Aggies are certainly worrying about the fitness of defensive stalwart Rachel Lenz, who missed their tournament opener. If she can’t go, it opens the door for freshman Gracie Wright to return to the starting lineup. Texas A&M will hope their attack, led by Shea Groom, Elizabeth Keester, Allie Bailey and Kelley Monogue, can fire them past their in-state rivals.

Four Players to Watch in the Second Round:

D Kadeisha Buchanan, West Virginia (Freshman): The Mountaineers represent another team ravaged by injuries at this point in the season. Facing No. 1 seed Virginia Tech, the matchup of freshman center back Buchanan against Tech speedster Jazmine Reeves is one to watch for. If the Canadian international can continue her tremendous form to help limit Reeves and the Hokies in the final third, it could lay the foundation for a shock win. Whoever survives Friday night has an interesting Sunday ahead, with the forecast in Blacksburg calling for a high of 28.

F Rachel Daly, St. John's (Sophomore): The nation’s leading scorer delivered a goal and an assist as the Red Storm clung to a first round upset over UCF last weekend. A meeting with Arkansas on Friday is a winnable game for either side, and if Daly can continue her form at the end of the season, things might end up breaking SJU’s way.

MF Daphne Corboz, Georgetown (Junior): The Hoyas’ reward for a two-loss campaign? A second round meeting with Virginia, on the road in Charlottesville. For as good as Georgetown has been, it’s hard to imagine them springing the upset. If Corboz can win the midfield battle against Morgan Brian and Annie Steinlage, there’s a chance that the Hoyas can match the Cavaliers up front – though it’s going to be a very tough go at Klockner Stadium.

F Rachel Tejada, Illinois State (Junior): The Redbirds already gave a good account of themselves thanks to a win over Louisville on penalty kicks in the first round. An even bigger hurdle lies ahead on Friday against Michigan, an outsider’s pick for the College Cup. Tejada has once again been superb this season in the offensive third, with 15 goals and 12 assists to her name. She has a scoring sidekick in Hannah Leinert, and will need a clutch performance to give Illinois State a chance here.