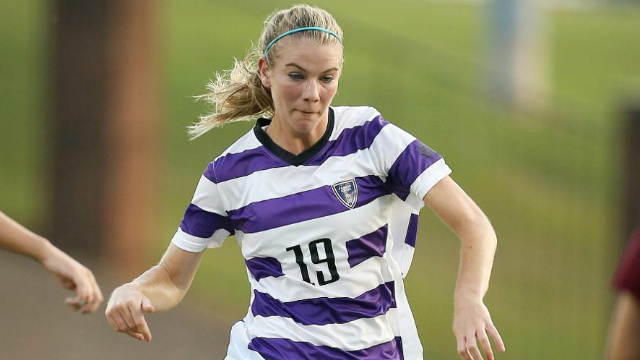 Selection Monday is done and dusted as the road to Cary, North Carolina and the women’s College Cup officially begins on Friday night at campuses across the country.

Exciting matchups loom in the first round. Here is a look at some of the games and players to watch this weekend.

Five First Round Matchups to Watch (all times EST)

The tournament kicks off on Friday with this clash between two California programs, and it could end up being closer than one might expect. Cal State Fullerton’s firepower, fueled by Rebecca Wilson and Christina Burkenroad, fought their way to a Big West tournament title and has shown the ability to carve up just about any defense in the country.

A trip to LA to face USC is tricky. The Trojans, which finished second place in the Pac-12, are peaking at just the right time. Over the past six games, USC has conceded only one goal (in a 1-0 loss against Stanford), as Kayla Mills and Mandy Freeman give them a big advantage in the defensive third. However, if the Titans can get off the mark early in this one, it would put pressure on an inconsistent USC frontline attack. Morgan Andrews has buoyed the team from midfield with her seven goals, though she’s taken a total of 80 shots to get there. If the USC offense shows up early, it’ll be a good day for the hosts.

One of the best matchups of the first round takes place in College Station, as the Huskies make the flight to the heart of Texas for a meeting with last year’s national semifinalists. Washington’s form is dipping at the wrong time, losing back-to-back games in Pac-12 play to close out the regular season schedule. The players who got them to this point – Shannon Simon, Kim Keever, Kelcie Hedge – will need to step up to jump start an offense that scored just once in those two losses.

The Aggies counter with their blend of youth and talent that has led them to a 21st straight NCAA Tournament appearance. Midfielder Mikaela Harvey helps make the offense tick, tidy with the ball in possession and able to spot the critical pass to attackers like Haley Pounds, Ally Watt and Emily Bates. Transfer goalkeeper Danielle Rice earned the starting nod between the posts during last week’s SEC tournament, and could end up getting the call once again for this do-or-die encounter.

An all-Texas clash pits the Conference USA tournament champions against the Big 12 titleholders in Lubbock. The Red Raiders are riding the high in the wake of their semifinal triumph against West Virginia last weekend. Forward Janine Beckie gives the Big 12 side the offense needed, while goalkeeper Lauren Watson’s heroic stand helped secure league tournament success. They won’t dwell on it, naturally, as North Texas certainly has the formula to trouble Texas Tech.

A strong spine powers the Mean Green in similar capacity. Senior goalkeeper Jackie Kerestine has the ability to keep North Texas in any game, no matter the opponent, while Rachel Holden and Karla Pineda provide clutch scoring, with 11 game winning goals between them. This one is poised to be an even, closely contested affair.

If numbers are anything to go by, one of the highest-scoring first round games is likely to take place in Washington, D.C., when Hofstra visits the Hoyas. Both sides have scored more than 40 goals this season, while each defense has conceded more than 20. Individually speaking, both teams have a marquee star that helps drive the attack, Georgetown through Rachel Corboz and Leah Galton on the other side.

Similarities run deep between conference tournament performances as well; the Hoyas lost on penalty kicks in the Big East semifinal, while James Madison unseated Hofstra in the same round. Both teams will be looking to rectify that wrong and extend their season by at least one more game. With little separating the teams, home field advantage could end up swinging this matchup in Georgetown’s favor.

How can you not love the matchup between two dynamic scoring duos? Princeton trots out its attack of Tyler Lussi and Mimi Asom (who combined for 23 goals this year); the Eagles counter with McKenzie Meehan and Hayley Dowd, who scored 28 of the team’s 36 goals. Despite their status as the visitors, BC enters this one as the slight favorite given that they’ve navigated their way through the demanding challenge of an ACC regular season campaign. That being said, Lussi and Asom are more than capable of leading the Tiger attack to the home upset, given BC’s hit-or-miss defensive record.

First Round Players to Watch

F Charde Hannah, South Alabama – Fourteen games in a row unbeaten, Hannah leads the Jaguars into a home NCAA Tournament game for the Sun Belt Champions. The foe is a feisty LSU side, bolstering an impressive attack. That’s where Hannah, the conference’s MVP comes into play, after leading the team’s offense with 10 goals on the season. South Alabama tallied 57 goals on the season and is capable of keeping up with the Tigers if this turns into a shootout.

M Stephanie DeVita, Furman – Riding a nine game winning streak into its difficult first round matchup against in-state foes Clemson, hopes of an upset center around how much success the senior DeVita can achieve on Saturday. A storied collegiate career could come to the end otherwise, as the South Carolina native currently sits on an impressive 68 goals during her four seasons at Furman, proving herself capable of scoring in big games.

F Tabby Tindell, Florida Gulf Coast(w) – The reward for another year of domination in the Atlantic Sun for the Eagles is a trip to South Florida. Any hopes of an upset focus on Tindell, who is tied for fourth in the nation on points with 44 (17 goals, 10 assists). She’s bagged seven game-winning goals for FCGU this season, and is a critical piece in the team’s hopes this weekend.