DII/DIII Performances of the Week: Oct. 19 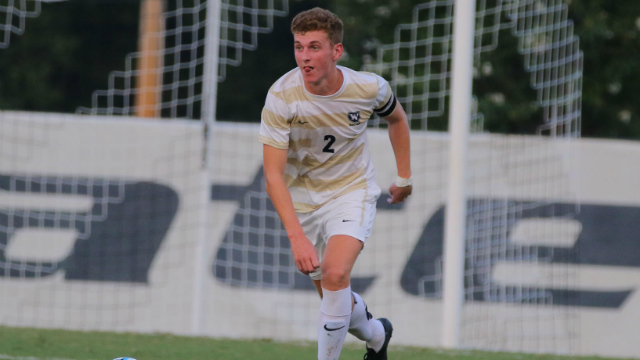 Wingate surged into the top spot of the latest NSCAA rankings after a 2-1 victory against Carson-Newman. Defender Alex Nelson opened the scoring, and kept the game tight as Nate Evans eventually came up with the winner in overtime.

Two goals from Roy Abergil paved the way for Colorado Mesa University to see off a challenge from CSU Pueblo with a 4-0 win. Abergil’s brace brought his season total to 19, good for second in Division II.

A goal and an assist for Hugo Gutierrez ensured that California Baptist returned from its trip to Hawaii with all three points, as they held off Hawaii Pacific by a 2-1 score.

Thanks to a second half hat trick from Jaime Siaj, Pfeiffer continued its momentum with a 5-0 defeat of King on Saturday. Martim Galvao and Santi Moar each added two helpers.

Another 90-minute shift from Sierra Shugarts helped Western Washington stay on the winning track, shutting out Concordia by a 1-0 score line. Shugarts also went the full 90 in a 2-0 defeat of Western Oregon on October 13.

The Rockhurst attack was on a roll over the weekend, thanks in part to the contributions of Brandi Vollmer. After netting the game-winning goal in a 2-1 win against McKendree on October 14, she setup two more goals in a 6-1 victory over Illinois Springfield.

A goal-scoring rampage from Adelphi senior midfielder Morgan Santoro helped to power the Panthers to a pair of lopsided wins. Santoro struck twice in Saturday’s 5-1 defeat of Franklin Pierce, and she added a hat trick in an October 18 win against Pace.

Midfielder Bryce Ciambella accounted for the game’s only goal as Amherst defeated Colby by the score of 1-0.

Franklin and Marshall won its regional clash against Johns Hopkins, as defender Ben Wild accounted for the game’s lone strike.

Wins over Rowan and Stevens Institute of Technology extended Rutgers-Newark’s winning streak to 10 games overall. Rutgers sent Rowan to its first defeat of 2016, as Fabio De Sousa found the back of the net twice in the Saturday result. In Tuesday’s win against Stevens, Sebastian Gostynski scored twice for the victors.

It was a crazy, back-and-forth clash on Saturday between Carthage and Millikin, with the former eventually emerging as 4-3 winners. Senior Carthage forward Austin Bitta was involved in all four goals, scoring two and setting up the other two in the shootout win.

It was a successful senior day for the University of Chicago, as it battled to a 2-0 win against NYU on Sunday. Jenna McKinney had a hand in both goals, scoring one and setting up the other. She also found the back of the net in Friday’s 2-1 victory over Brandeis.

Playing two games in two days, Knox picked up two wins to maintain its unbeaten 2016 campaign. Kayla Brown found the back of the net twice to help the Prairie Fire best Lake Forest College, and substitute Kelsie Pos fired Knox past Ripon College with the game’s only goal.