DII/DIII Performances of the Week: Oct. 5 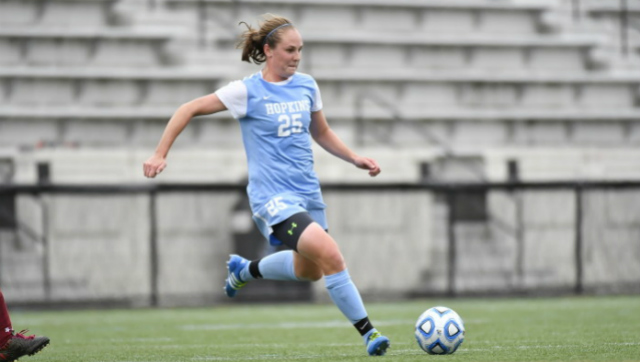 It was a prolific weekend for No. 1 ranked Grand Valley State. Junior forward Gabriella Menciotti contributed six goals and two assists as the Lakers outscored their opponents 15-0 in two wins.

Playing two games in two days last weekend, East Stoudsburg(w) came away with wins in both, thanks in large part to sophomore forward Alex Pickett. The second year standout provided an insurance goal in a 2-0 win over California (Pa.), before she scored twice in a 2-0 defeat of IUP.

Senior midfielder Caitlyn Jobanek was at the heart of two Western Washington wins over the past week. She rang the bell twice in a 4-1 victory against Saint Martin’s, before bagging another brace in a 2-1 win over Concordia.

It a big upset on Sunday for Colorado State-Pueblo, which knocked off No. 3 Colorado Mines at home. Midfielder Jessica Westhott scored the winner, and setup an insurance goal as the ThunderWolves won 2-0.

Columbus State continues to climb the rankings after easing past Lander by a 5-0 score on Saturday. Senior Nicole Corcione had two of the goals in the victory.

The wins keep coming for Simon Fraser, which rolled past Concordia to the tuen of 5-1. Riley Pang and Mamadi Camara were involved in all five goals, as Pang score twice and had an assist, and Camara chipped in two tallies of his own.

Sophomore midfielder Charlie Ledula continued to fill up the stat sheet for LIU Post, scoring twice and adding an assist in a 4-0 win against Wilmington (Del.) on Saturday.

Continuing its strong start to the season, Tiffin snatched a 2-0 win against Oho Dominican on Friday, and beat Ashland on Sunday. Andre Landell scored twice in the win against Ohio Dominican, and Abdoul Magid Sy had three assists across both games.

Alex Mullet helped propel Midwestern State to a couple of wins last weekend. He scored his first goal of the season in MSU’s 2-0 defeat of Texas A&M International, and came away with another goal and two helpers in a 4-0 win over St. Mary’s (Texas).

An offensive barrage fired Williams back into the No. 1 spot in the latest NSCAA DIII Top 25. A Kristi Kirshe goal secured a 1-0 win against previously undefeated Connecticut College on Saturday. Kirshe had three assists, and Alison Lu scored a hat trick in Sunday’s 8-0 victory over Castleton.

Brianna Reid supplied a goal and an assist as Wisconsin-Whitewater toppled in state foes Wisconsin-Stout on Saturday.

Facing a tricky road test against Lycoming, two goals from Lennon Kramer provided the winning margin as the Knights secured a 3-1 win.

Senior captain Meg Van de Loo anchored a big for Johns Hopkins, handing Swarthmore its first loss of the season in a 2-1 win. Van de Loo scored a goal and had an assist as the Bluejays took a step closer to a Top 25 ranking.

Sophomore midfielder Rafael Broseghini picked a good time to score his first three goals of the season for Luther. Broseghini came off the bench and bagged a second-half hat trick in a 3-0 win over Simpson on Saturday. Goalkeeper Will Blain made 14 saves as Luther won twice in two days, including Sunday’s 1-0 upset of Macalester.

Ohio Northern midfielder Chris Garbig helped his side keep a clean sheet and keep its unbeaten season alive, scoring the game winner in a 1-0 victory over Mount Union.

For the first time since 2005, Tufts found a way past Amherst, winning 3-0 at home on Saturday. Several players contributed in the win, with Gaston Becherano scoring the game winner and goalkeeper Scott Greenwood making four saves in the victory.