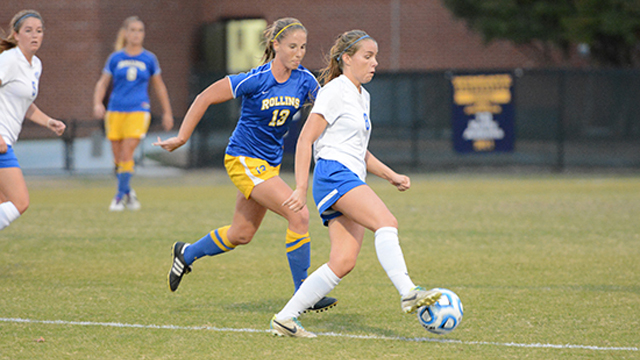 The Final Four in the women’s Division II and Division III ranks has arrived.

After two weekends jam-packed with knockout action, there are just eight women’s teams left in the two lower divisions. Division II has been largely free of upsets, with top seeds West Florida and Grand Valley State advancing in addition to No. 2 seeds Western Washington and American International. Combined, the four are 76-3-7 this season.

The Division III tournament has been a bit harder to predict. Defending champ Messiah fell to Ithaca in the third round, while four-loss Capital shocked Washington (Mo.) to swipe a spot in the semifinals in a week and a half.

So with a chance at immortality waiting next weekend in San Antonio, here’s a look back at last weekend. 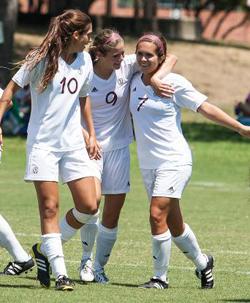 It hasn’t always been an easy road for Grand Valley State, one of the most prolific Division II women’s soccer programs in the country. But here they are, undefeated and in the semifinals for the fifth consecutive year. Freshman midfielder Marti Corby has played a massive role in the run, scoring three goals in the Lakers’ three postseason games.

That included one in their 2-1 win at Minnesota-Duluth to earn a customary spot in the semifinals. Corby scored the opener in the fourth minute, and Charlie Socia doubled the lead in the 72nd to seal the win. The victory pushed the Lakers to 22-0-1 and into the semifinals for a shot at American International.

West Florida flying by the seat of its pants

The defending national champs have had an undeniably difficult time getting back to the semifinals to defend its crown. West Florida had to take out Rollins in its opener before facing fellow No. 1 seed Wingate for the right to go to the final four.

It was an exhausting contest, but the Argonauts found a way. The Argos took a 3-1 lead in the 71st minute before Wingate narrowed it to a cosmetic 3-2 with 30 seconds to play. The win extended West Florida’s unbeaten streak to 33 games and its winning streak to 14. That snapped the previous program record of 13, which the Argos set during their national title run last season. They’ll be hoping this run ends similarly.

Western Washington may not have had the most difficult road to the national semifinals in Evans, Ga., but the Vikings have taken care of business. Thanks to a topsy-turvy region, the Vikings have faced a six seed (Seattle Pacific), a four seed (CSU San Bernardino) and a three seed (St. Edward’s) en route to the semifinals.

The battle against previously unbeaten St. Edward’s was undoubtedly the fiercest. WWU scored once on a goal from Catherine Miles in the sixth minute, and then once again on an own goal just before half to set the final 2-0 scoreline. The Vikings kept a shutout for their third consecutive tourney game, and they’ll face defending champion West Florida in the semis.

Trinity (Texas) claws its way to the Final Four

There are a number of ways to find your way to the Final Four, and Trinity found about the most difficult one in the books. After dropping Augustana and Illinois Wesleyan in the opening rounds, Trinity earned a date with Montclair State, which hadn’t lost all year and was fresh off a 7-0 beating of Bowdoin. But Trinity quickly ran up a 2-0 lead off goals from Kelsey Falcone and Yasmeen Fara and hung on for a 2-1 win.

For their reward, one-loss Wheaton (Ill.), which had spent a large portion of the season as the No. 1 team in the nation. Another difficult opponent, another 2-1 win. With the game tied at 1-1, Kimberly Polasek fired the Tigers into the lead for good in the 72nd minute. That lifted Trinity to 24-0-2 and into the semifinals for the first time since 2002. They’ll face 17-1-3 Middlebury for a shot at the title.

Trinity also gets an uncommon reward for wriggling its way through to the final four. The last set of games will be played at Toyota Field in San Antonio, Texas. Trinity’s campus is 11 miles away.

There were plenty of positive vibes swirling around William Smith as the program entered the playoffs. The Herons had only lost one game in the regular season and were an interesting pick to make the semifinals. But its region was stocked with talent, namely defending champion Messiah and College of New Jersey.

With its stifling defense in tow, William Smith maneuvered around TCNJ for a 1-0 win in the third round. On the other side of the regional bracket, Ithaca managed to bump of Messiah, seemingly taking the lead in the clubhouse for the team most likely to advance on to the semis. But the Herons had other ideas, streaking to yet another 1-0 win on a Junior Dineo Mmutla goal in the 65th minute.

After outlasting a difficult field, the Herons will face Capital in the semifinals.

Outliers find their way to the bright lights

Perhaps the surprises of the DIII final four are Capital and Middlebury, who probably weren’t high on many mock drafts. Neither team had ever made an appearance in the national semifinals, and both have tough roads to hoe to get there for a first time.

Both made it happen with theatrical flair. In the quarterfinals, Capital drew level with Washington (Mo.) on a goal in the 67th minute and hung on to take it to penalties. The Crusaders, who’d lost four games during the regular season, improbably beat Washington 3-2 in kicks to find their way to San Antonio. After the game, Capital coach Chris Kouns realized the difficulty of their task.

"We know player for player, Washington is better, and if we played them 10 times, they might beat us nine times,” he said.

As for Middlebury, the Panthers had to find a way to sneak past Johns Hopkins, which was on an 11-game winning streak. With the game seemingly destined for overtime, Scarlett Kirk scored a shock goal with 17 seconds left in regulation to send the Panthers into the semifinals for the first time ever.