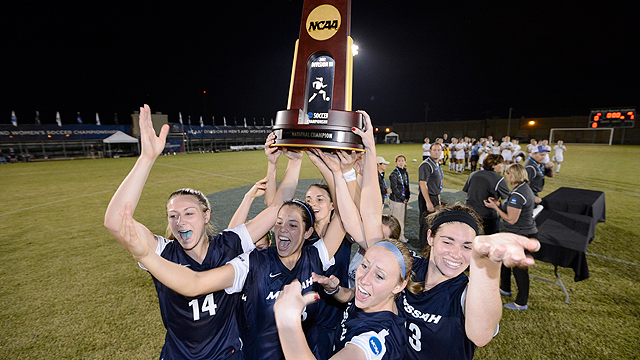 Combined, the Messiah men’s and women’s soccer programs have racked up 14 Division III national titles. Two of those came last year, when the women nipped Emory 1-0 and the men smashed Ohio Northern 5-1 to claim an incredible national title sweep. While the women go for No. 3 in a row and the men look to repeat, the onus falls to the rest of the DIII landscape. Can anyone slow down the runaway locomotive that is Messiah soccer?

What follows are the top five men’s and women’s teams in the nation as chosen in NSCAA’s Division III preseason poll. 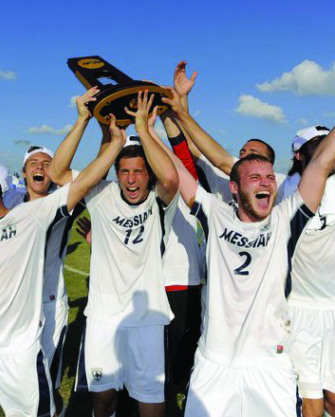 Fall seasons don't get any better than Messiah's 2012 campaign. While the men were busy winning a title, the women followed suit with a 1-0 win over Emory. It was the Falcons' fifth national title, capping a 24-1-1 season for a program generally considered one of the best year-in, year-out in the Division III ranks.

Messiah has won two straight national titles and been to 10 of the past 11 Final Fours. If that's to continue in 2013, a cast of newcomers will have to step up. Messiah welcomes seven new players, and nine more are just sophomores. Alex Brandt and Rachel Scheibeler are gone, and so are their 33 goals from last year. The return of Nikki Elsaesser (11 goals, 11 assists) and Alicia Frey (12 goals, four assists) will be a boost.

The Eagles pulled into the clubhouse after the 2012 season with a 15-2-7 mark and just a win away from a national title in its first ever appearance on that stage. After rising to new heights last season (the program also made its first ever Final Four appearance), Emory is poised to make another run at No. 1 this fall.

Three of Emory's four defenders are back from a stout defense, and each of the top four goal-scorers from Emory's best offensive team in history return. Emory scored 54 goals last season, and with players like Emily Feldman (eight goals, four assists), Kelly Costopoulos (eight goals, three assists) and Charlotte Butker (five goals, 10 assists) back in the lineup, the Eagles should be even better in 2013.

For the second consecutive season, Wheaton's season plowed into the Final Four before coming to an abrupt end. Despite welcoming 13 new players in 2102, Wheaton went 21-4-2 and had three All-Americans. The return of the bulk of the roster has expectations high.

Leah DeMoss, who had 21 goals last year, is the team's only returning All-American, and she'll lead a line that should be competitive with anyone in the country. Ally Witt scored 20 goals and had six assists last year as a freshman. Plugging holes in the midfield will be paramount with the loss of All-Americans Laura Karsten and Keri Shannon.

Located in the soccer cradle of St. Louis, the Bears are continually a team to watch in the Division III ranks. Washington went 19-2-1 last year, made the NCAA quarterfinals for the sixth time and won its eighth University Athletic Association title.

Sixth-year coach Jim Conlon is excited about the amount of returning talent in 2013. The Bears have nine players back who started at least 10 games last season, including all-region players Lillie Toaspern, Anna Zambricki and Kate Doyle. Zambricki was an All-American last year with 14 goals and six assists. The junior is tracking a number of program records in her final two seasons.

The Tartans soared to their best finish in program history last season. They streaked to the NCAA quarterfinals for the first time ever behind one of the best defenses in the nation. At one point they posted seven consecutive shutouts and had 13 over the course of a 14-1-5 season.

Lauren Simicich was the beating heart of that defense, and she's back for her junior year after making the All-America second team in 2012 as an underclassman. The return of a key core should keep Carnegie Mellon in good stead nationally this year. Keeper Alex Venegas and Savina Reid, who led the team with nine goals in 2012, are both key. If the Tartans can keep up the defensive intensity and turn up the offense a notch, they'll be a tough out this fall.

The Falcons are a leviathan in Division III men's soccer. They were 23-0-2 last season and smashed Ohio Northern 5-1 to win their ninth national title. In a sign of true dominance, Messiah scored four goals inside the opening 20 minutes to leave no question as to the dominant force in DIII.

A slew of returners will make it tough for the opposition to knock Messiah off its lofty perch. Division III player of the year Jeremy Payne is back for his junior season after scoring 17 goals last year. Jack Thompson's team-leading 12 assists are also back, as is the core of the No. 2 defense in the nation last season. Messiah gave up a minuscule 0.35 goals and four of the back five (including the keeper) return.

The Duhawks matched the best postseason run in program history last year with a 23-2-1 record and a sprint to the national semifinals. After 99 steely minutes, Messiah's Mike Kovach sent Loras home for the offseason. Such a hard-backed performance against the nation's preeminent DIII men's program wasn't a horrible way to go.

Replacing talent at Loras is a relative matter considering 20 players scored goals last season. Chief among those was co-leaders Kevin Cavers and Erik Berkowitz with eight apiece. Cavers led the team with 24 points, and both he and Berkowitz return for the Dubuque, Iowa side, Cavers in the middle and Berkowitz at the back. Loras' rotational policy assures the Duhawks should be experienced again in 2013.

In March, Williams coach Mike Russo earned some national accolade when he was selected for Sports Illustrated's 'Faces in the Crowd' section. It was in recognition of his 400th win last year and his 34-year run with the Ephs. After a 16-2-4 record and a national semifinal appearance in 2012, it seems his train is still rumbling along.

Williams' strength last season was its defense, as its loss to Ohio Northern in the Final Four was the first time all season the Ephs gave up more than two goals in a game. Their return of 36 goals in 22 games wasn't a thing to scoff at, but a better offensive output can only help. The return of User Kushaina and Mohammed Rashid, who tied for the team lead in goals with six last year, should help matters.

When it comes to defense, Amhurst was historically good in 2012. The Jeffs conceded an incredible three goals over their 20 games, which was the second-lowest goals-against average in Division III history. Despite the dominance, their season ended with a penalty loss in the quarterfinals to end the season 17-1-2.

While defender Chris Lerner is gone, fellow All-American Julien Aoyama returns for his senior season to anchor the back four. Amherst will have to figure how to replace captain Spencer Noon's 14 goals. Last year, South Korean Jae Heo was second on the team with seven goals.

The Polar Bears put together one of the best seasons in program history last season. They went 25-3-0 and went on a magical run through the state tournament before Messiah dead-ended it in the final. Ohio Northern is gunning for its third straight conference title, a fourth straight conference tourney title and hopefully a state title this time.

Four of the Polar Bears' top six goalscorers were seniors last year, so some reordering was necessary in the offseason. Still, the return of Keegan Ross has Ohio Northern giddy for the possibilities. As a freshman last season, Ross tied a program record with 22 goals and snapped the freshman mark. He also contributed nine assists, and few if any DIII forwards have higher expectations and more responsibility as sophomores.