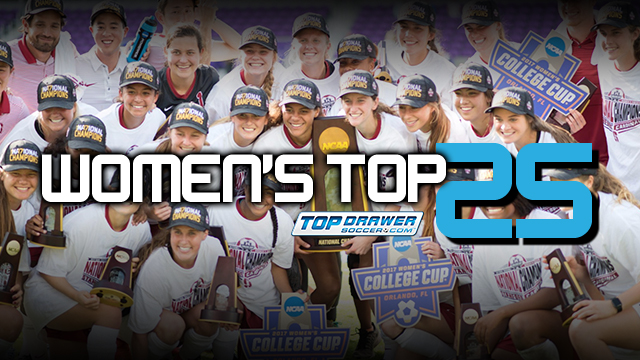 Can anyone keep up with Stanford?

That is almost sure to be one of the recurring themes of the 2018 women's Division I college season, which begins this week on Thursday, August 16.

The 2017 national champions start the season as the No. 1 team in the TopDrawerSoccer.com Preseason Top 25. Led by the likes of Alana Cook, Tierna Davidson, Tegan McGrady, Catarina Macario, there is a glut of talent in Palo Alto.

One program that has plenty of potential to catch the Cardinal is their Pac-12 rivals UCLA. The Bruins bring back a loaded lineup that includes Hailie Mace, Kaiya McCullough and Ashley Sanchez.

It's far from a two-horse race, of course. Rounding out the top five are storied programs such as North Carolina, Virginia(w) and Florida(w).

Check out the complete Top 25 preseason rankings as a new season gets set to kick off.