While the NSCAA Division II rankings continue to trawl up new contenders from the silt bed of the nation's unranked, Simon Fraser continues to wreck opposition. The Clan easily held onto their No. 1 overall ranking this week and look to be nearly unstoppable. Similarly, the top-ranked Grand Valley State women keep winning and show no signs of slowing.

With conference action heating up, we take a look at a couple big stories from the weekend in Division II soccer. 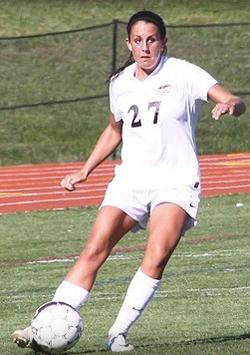 The Post men have been rapid risers in the polls this year, and they put their No. 2 ranking on the line last weekend against New York Institute of Technology. With Simon Fraser continuing to steamroll opponents, Post is the closest thing to a challenger in DII men's soccer, and the Pioneers didn't disappoint this weekend.

After a 4-1 win to get the weekend started, the Pioneers ran up against a tough NYIT that had only lost once. The two conference foes were inseparable through regulation, and that's when the real fireworks began to crackle. Just 31 seconds into the extra session, Post earned a penalty that senior Eirik Bjoernoe finished calmly to help Post escape with a nervy 3-2 overtime win and its No. 2 ranking in place. Now, Post is streaking through the midsection of the regular season with a sterling 8-0-0 record. The win over NYIT gives the Pioneers a 2-0-0 start to conference action, too, which will do plenty for confidence as the season wears on.

There were few women's teams that had risen as meteorically as Pennsylvania outfit Millersville. The Marauders opened the season 5-0-1 over their first six, including a nice 4-0-1 start in conference play that shot them out to No. 9 in the nation. That came crashing down against Gannon over the weekend.

The teams were knotted at 1-1 after regulation thanks to two rapid-fire goals answered in quick succession 48 seconds apart with less than 10 minutes to go in the second half. That set the tone for a fast and furious finish that bled into overtime with the squads still tied. The frenetic pace set the table for Britney Barry's first career goal in the fourth minute of the first overtime, giving Gannon a shock 2-1 win over heavily favored Millersville. that pulled Gannon to within a game of the Marauders in conference at 4-2, which should make for a nice finish to the season.

Notre Dame came into the weekend at No. 4 in last week'd NSCAA poll, while Colorado Mines entered at No. 9. Neither exited the thunderdome with their rankings intact.

While Colorado Mines entered with the lower ranking of the two, the upset they suffered at the hands of Colorado Christian was perhaps the most surprising. That's because Mines' in-state rival had never won the conference over their favored opponent and had played in three games in five days. No matter. Christian bounced back from an early goal to tie Mines before the halftime break to pave the way for a scintillating second half. The teams were tied at 2-2 when Bryce Fosdick rifled home a rebound in the 88th minute to seal the improbable 3-2 win.

As for Notre Dame, it hadn't lost all season before a trip to unranked Findlay ended that streak ignominiously. Despite jumping out to a 1-0 lead, Notre Dame faltered when Oilers senior Nick Naayers tallied in the 62nd minute. Then Jared Lyon scored again in the 85th to deal Notre Dame's fate and drop another top 10 program in the rankings.