"Kansas City is an incredibly talented team. Libby Jandl of Duke(w) and Molly Campbell from Notre Dame(w) are two of the best in the country, and from the start it was a heck of a battle, " explained Eagles head coach VinceThomas. "I started my Big 12 forwards and it paid off as Emily (Cressy/Kansas(w)) found Amanda (Lisberger/Texas) cutting hard to goal. She flicked it to Kelsey (Kraft/Oklahoma(w)) who finished strong." 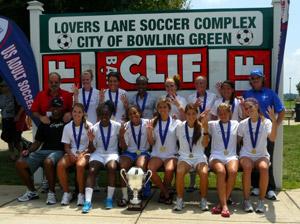 The U23 Eagles accept their medals.
With the score tied 1-1 late in regulation, both teams came within an inch of winning. Molly Campbell (Notre Dame) one touched a serve that bounced off the post, and moments later Lisberger found a seam through two defenders and hit the left post. With 30 seconds remaining in double overtime, and Kansas City ahead 2-1, Lauren Jackson (Kansas) found Haley Boysen on the wing.

The USC sophomore blasted a shot from 25 yards away that hit the far post and bounced at a 45 degree angle into the net, sending the game to penalty kicks. The Eagles' Kelsey Kraft, Lindsay Bullock (Long Beach State(w)), and Coco Goodson (UC Irvine) all converted with low, hard line drives, and when Eagles keeper Chante Sandiford (UCLA) made her third diving stop the Eagles thought they had won their 4th National title.

The referee, however, ruled that Sandiford had come off her line early and gave the Dynamos another opportunity. When the re-do failed to find the back of the net, the Eagles celebration began."

"I feel so comfortable, absolutely at home in the goal, and I love the challenge of keeping the ball out of the net," said Sandiford, a rising senior goalkeeper at UCLA who will start her third season for the Bruins this fall.

When some of her UCLA teammates approached her to play club ball one last time this summer for the Under-23 Eagles, Sandiford couldn't pass up the opportunity. "Their track record is unreal, and all the girls on the team are just incredible soccer players," Sandiford said. "Everything is like clockwork with them, so it's really easy for me to come in and be a part of something that's already so well run. I just have to do my part — keep the ball out of the net — and they'll take care of the rest."

“It is amazing what this team has accomplished, starting when they were just thirteen”, notes Thomas, “and now – eight years later – they have won more national titles than any other club soccer team in history.

From the outset, this group relished competing against the best players in the country – and in time came to appreciate that to win at the highest level you must be very good individually…and even better as a team.

Four national titles and six state crowns in eight years is their legacy, but it is their incredible commitment to win that was the difference today and what makes them true champions on and off the field.”