Maryland has returned to the #1 spot in the TopDrawerSoccer.com men's college soccer Tournament 48 National Ranking this week, following the Terps’ 5-1 win over Coastal Carolina in the third round of the NCAA Tournament, and previous #1 Akron’s loss on penalties to Creighton. 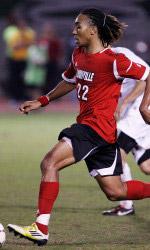 Meanwhile, Louisville’s Marlon Hairston is our TopDrawerSoccer.com Men’s College Soccer Player of the Week after his goal helped lift the Cardinals over Northwestern in a third round, NCAA Tournament victory. Recipients of the honor, along with the entire Team of the Week, are chosen after examining Division I match summaries each week.

GK: Tomas Gomez, Georgetown – Made the decisive save in post-match penalties to lift Georgetown to the victory over Syracuse.

D: Jordan Gafa, North Carolina – Went 92 minutes in the back as UNC took a shutout victory in overtime.

D:  Brent Kallman, Creighton – Went 110 minutes in the back as Creighton defeated Akron on penalties.